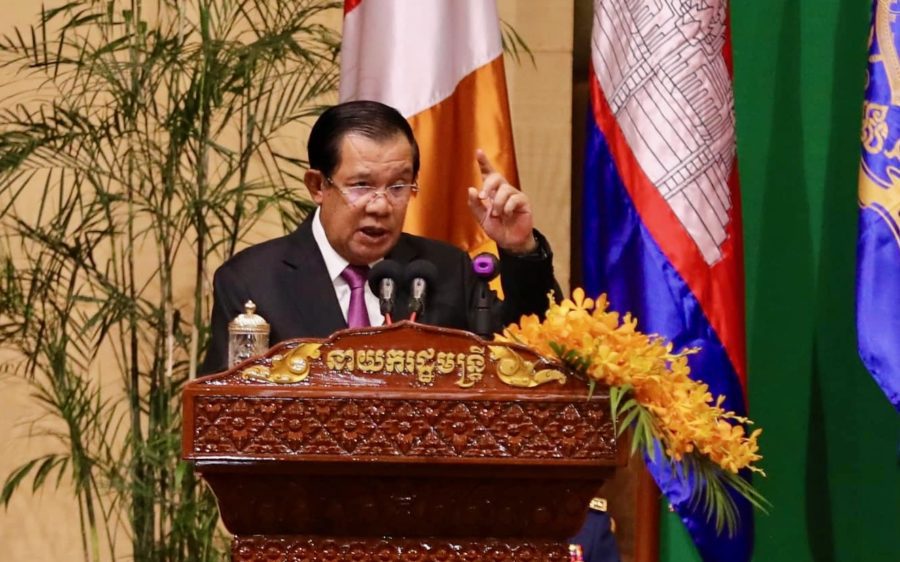 Prime Minister Hun Sen railed against his agriculture minister on Wednesday, lambasting him for raising pork prices and for not attending a meeting with the Commerce Ministry.

The prime minister was speaking at the annual meeting of the Interior Ministry, where he used expressive body language to question Agriculture Minister Veng Sakhon in person on the stage. Hun Sen’s main criticism was with Sakhon’s alleged mismanagement of pork prices and for creating a supply-side issue.

He said Sakhon was “pleasing” a few local pig farmers, which was causing rising prices, and said the issue could be resolved with meat imports.

“I would like to point out that among the ministers, the minister who doesn’t cooperate with others is the agriculture minister,” he said, pointing repeatedly at Sakhon who was sitting on the dais behind Hun Sen.

Hun Sen went on to criticize Sakhon for missing a meeting with the Commerce Ministry to discuss import of products. He said Sakhon should stop sending letters back-and-forth and just attend meetings to directly deal with price issues and inflation.

“The way your excellency works could be the way of riding a horse to see flowers,” Hun Sen said.

All the while, Sakhon could be seen with folded hands bowing to Hun Sen’s words directed at him.

“It is not difficult to remove a minister. I need at most two hours. I can remove one minister” through a royal decree, Hun Sen continued.

The prime minister also raised the issue of cutting spending, instructing ministries to only prioritize essential expenditures. He said the Covid-19 pandemic had depleted the government’s revenue, so he directed officials to improve tax collection and appealed to companies to pay their taxes.

“I would like to state that if the economic bomb explodes, then nearly 17 million people will [be affected]. Do whatever it takes to manage the macroeconomy and inflation.”