Hun Sen Ponders How to Prevent a Gov’t Overthrow 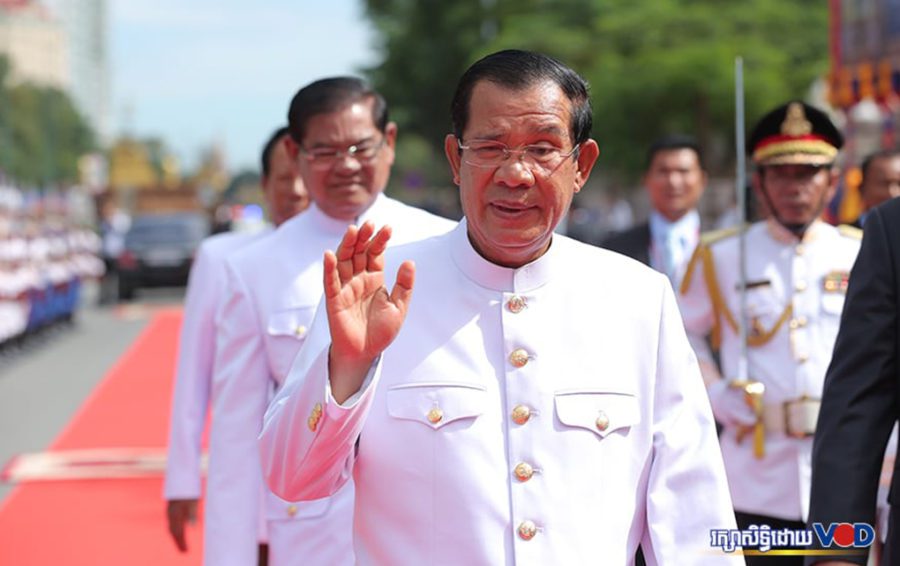 Prime Minister Hun Sen last week issued a letter to officials that seemed to reveal concerns that changes in the political situation at the grassroots level in Cambodia could cause risks for his usual mechanisms for maintaining control and power.

In the letter, Hun Sen advised lower-level officials to visit these grassroots regularly and explain to their communities the dangers inherent in what he said could be a wave of uprisings that form a “color revolution” against his government.

The letter from the prime minister, who is also the president of the Cambodian People’s Party (CPP), appeared to refer to the publicly stated plans of former opposition leader Sam Rainsy to return to the country and rally his supporters.

Rainsy, who has been living abroad in exile since 2015, has recently increased the frequency of his appeals — usually posted to Facebook, where he presently has 4.6 million followers — for the people and armed forces to rebel against Hun Sen.

Considering such political threats between the two leaders, it is no small task to try to predict Cambodia’s future if there is no political compromise forthcoming.

For one, Hun Sen and his CPP have claimed that their current government that resulted from last year’s national election was proper, democratic and took place according to the Constitution — even as the free Western nations reject this.

These powers — most prominent the U.S. and Europe — have taken action in the form of threatening to withdraw trade preferences, such as the European Union’s Everything But Arms (EBA) scheme, from Cambodia unless the prime minister and the CPP government turns back toward a competitive democratic system.

They have demanded the release of opposition leader Kem Sokha from house arrest and the reinstatement of his and Rainsy’s Cambodia National Rescue Party (CNRP), which was dissolved in November 2017 just in time for the election.

So the political dispute in Cambodia is being fought on two fronts: the pressure from the Western ‘bloc,’ and the potential divisions forming within the nation due to the dissolution of the CNRP, which had attracted almost as many supporters as the CPP in the two ballots in which it has been allowed to take part — in July 2013 and June 2017.

This has raised the question that Hun Sen seemed to mull in his letter of advice to lower-level officials: How do you prevent a movement against the government?

Kim Sok, a political commentator who spent 18 months in prison for insulting Hun Sen before fleeing abroad upon his release from prison after last year’s election, said that Cambodia’s democracy was still infected by the virus of “communism.”

Even if Hun Sen and his CPP had moved past communism in the economic field, he said it still operated politically as the revolutionary communist party it started as in January 1979 after breaking away from Pol Pot’s Khmer Rouge.

“If Hun Sen still insists not to listen to the recommendations from the international community and not listen to the will of Cambodian people, who want a return to democracy, I think Hun Sen will become the focus of the people’s anger,” Sok said. “The bad results will be known within three years after Cambodia loses the EBA.”

Em Sovannara, another prominent political analyst, said that in truly democratic countries the idea of changing political leaders was not raised in the same breath as the idea of “movements” against the government or bloodshed and chaos.

In order to prevent a movement to overthrow the government, Sovannara said, the CPP could reverse its attacks on the political situation and instead guarantee the mechanisms of democracy to allow for an even political fight in Cambodia.

“[Cambodia] has to keep the stance of multi-party democracy that is run according to the law,” Sovannara said. “Do not just rely on power and cause people to lose their rights and lead them to situation they cannot bear — I worry about this.”

The country’s peace was hard fought after decades of civil war, he added, and had been stabilized over the past decades thanks to the pressure valve of democracy.

In February, the E.U. started a six-month evaluation process to review Cambodia’s eligibility to the EBA tariff-free experts scheme after growing concerned that Hun Sen failed to live up to human rights and democratic obligations under the deal.

The World Bank recently issued a report estimating that if the E.U. suspended the EBA, garment exports could decrease by more than $381 million, footwear by some $128 million and rice by $144 million.

Yang Saing Koma, the president of the Grassroots Democracy Party, a small party formed by formerly CNRP-associated civil society leaders and activists, said the fix to the situation being faced by the prime minister and the CPP appeared clear.

“The easy thing would be that government has to release Kem Sokha and allow the Cambodian National Rescue Party to restart,” Saing Koma explained.