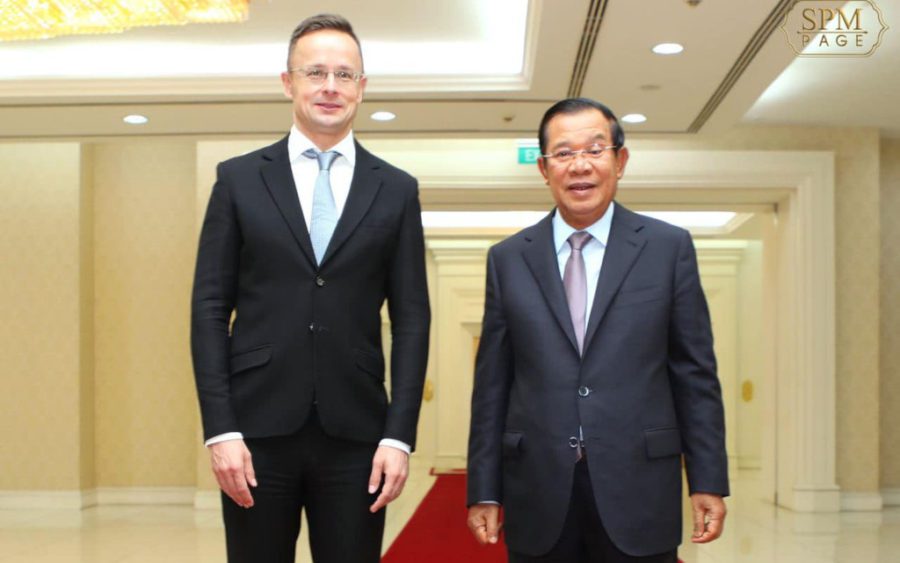 Prime Minister Hun Sen, his wife and more than a dozen members of his staff tested negative for Covid-19, and he will quarantine at home for 14 days as a precaution, the premier said late Wednesday, after he met a Hungarian official a day prior who later tested positive for the virus in Thailand.

“Even though I don’t have Covid-19, for the safety of all of us, doctors have required me to quarantine for 14 days. Even my wife, children and grandchildren, I cannot meet them,” Hun Sen said in a post on Facebook.

The prime minister said doctors quickly collected samples from officials who had contact with Hungarian Foreign Minister Peter Szijjarto after learning that Szijjarto had tested positive for coronavirus in Thailand, where he was continuing a diplomatic tour.

During his one-day visit to Cambodia on Tuesday, Szijjarto signed three agreements in front of the prime minister and shook hands with at least three top officials, including the ministers of agriculture and water resources, during the signing ceremony in Phnom Penh. Photographs posted on Hun Sen’s Facebook page show several senior officials, including the prime minister and Szijjarto, not wearing masks.

Water Resources Minister Lim Kean Hor told VOD earlier on Wednesday that he had shaken hands with Szijjarto, but cleaned his hand with alcohol spray after returning to his seat, so he was not worried about contracting the virus. Szijjarto also met with Foreign Affairs Minister Prak Sokhonn.

Hun Sen said his bodyguards and drivers were among those who had tested negative.

The prime minister expressed apologies to King Norodom Sihamoni and Queen Mother Norodom Monineath for not being able to meet them upon their arrival home from China to celebrate Independence Day on Monday, to people in Battambang, Pursat and Banteay Meanchey provinces who he planned to visit and distribute rice seeds to, and to Asean heads of state, since he would miss a meeting of the regional bloc from November 12 to 15.

Hun Sen said he was still able to exercise at home and would continue to work as normal.

“I am still able to exercise, including playing golf … at home, just without other people coming close,” the premier said.

Officials could still report issues to him and seek his advice, he added.

Health Ministry spokesperson Or Vandine said late Wednesday that she could not say how many officials were in contact with Szijjarto, and would share the number when it was available. Photos posted on government Facebook pages show Szijjarto had close contact with more than a dozen people.

Cambodia has recorded 292 cases of Covid-19 since January, with nine active cases and 283 recoveries. The nation has reported no coronavirus-related deaths and minimal community-level transmission.