Hun Sen Warns of Electricity Shortages Till May 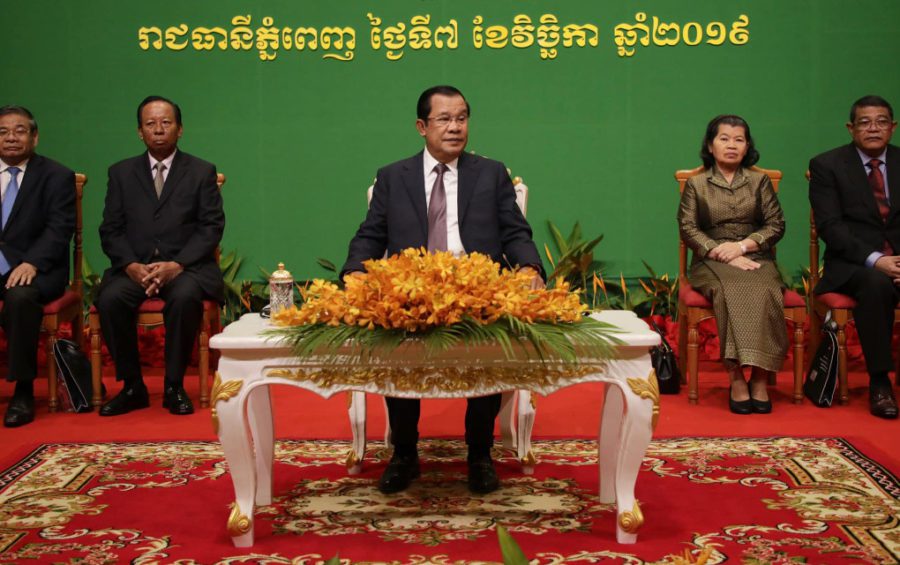 Prime Minister Hun Sen presides over an event at Phnom Penh’s Sokha Hotel on November 7, 2019, in a photo posted to his Facebook page.

Prime Minister Hun Sen warned on Thursday that the country could face electricity shortages over more than six months, with blackouts similar to those that afflicted the country earlier this year.

At an event to discuss the government’s National Development Plan for 2019-2023 at Phnom Penh’s Sokha Hotel, Hun Sen made an apology-in-advance that low water levels meant the country would be unable to generate enough power from its hydroelectric dams.

“It will end on May 2020, after two power generators are ready to provide 400 megawatts of electricity,” Hun Sen said.

The generators, on the outskirts of the capital, were previously announced as being oil and gas generators imported from Finland and Germany.

“I’d like to call on hotel owners who already have power generators to please use them instead of the public electricity supply,” the prime minister said.

Water levels in the Mekong River have been plunging to record lows as a late and condensed rainy season caused flooding across the country but rapidly receding water reserves.

The government in September announced a deal with Laos that would eventually add 2,400 MW to Cambodia’s power grid from coal-fired plants in the neighboring country, but the additional supply would not be available until around 2024.

Hun Vannak, an activist with environmental group Mother Nature, urged the government to avoid polluting sources of electricity even as it tried to meet the country’s power needs.

Dams had destroyed natural resources and coal plants were adding to climate change concerns, “and yet the electricity is lacking,” Vannak said.

“The government should think about other choices as recommended by scientists to use energy generated by sunlight or biomass.”

Earlier this year, the country faced severe electricity shortages during the dry season as homes across the country suffered daily blackouts alongside increased power bills. Hun Sen said at the time that the country was short of generating capacity by as much as 400 MW and floated the idea of leasing “power ships” from Turkey that would produce power while moored off the coast of Cambodia.