Hundreds of Pigs Culled Due to African Swine Fever 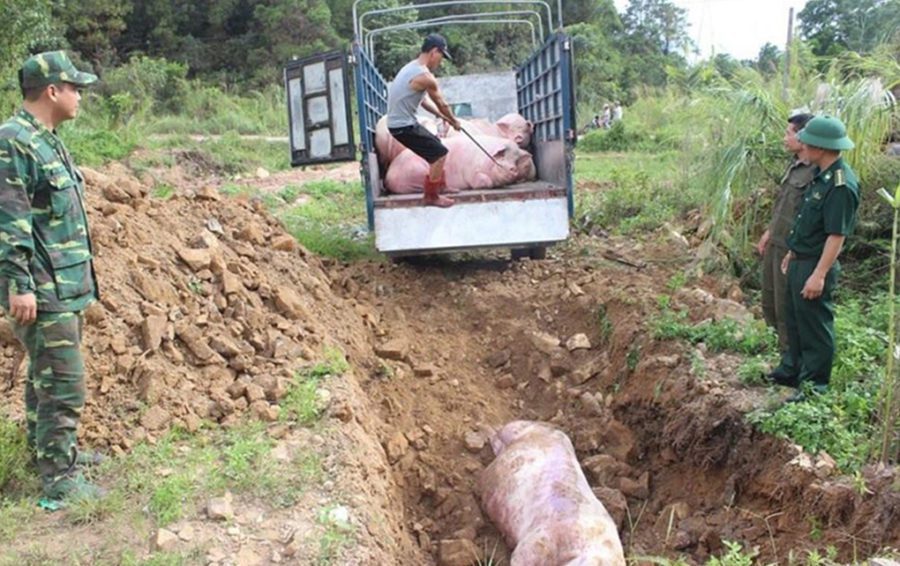 Hundreds of pigs were culled in Ratanakiri province in March and April. (Facebook/Mong Reththy)

Hundreds of pigs have been culled in Ratanakkiri province as authorities work to contain an outbreak of African swine fever.

Provincial officers are spraying disinfectant in a 3 km radius around the site where the infection broke out in Sorm Kaninh village, in O’Yadaw district’s Sorm Thom commune, while blocking the transport of pigs in and out of the area.

The African Swine fever virus is thought to be carried by ticks and is harmless to humans but highly contagious and almost always fatal for pigs.

“We have taken action about 3 km around the outbreak area, spraying chemicals and conducting research because we are afraid of this spreading. We have to prevent it,” said Soy Sona, director of the provincial agriculture department.

The outbreak began March 22. About 500 pigs have died or been culled since but the disease has yet to spread beyond the village, Sona said.

Tan Phannara, general director of the Agriculture Ministry’s animal health and production department, said initial assessments suggested the disease had spread from Vietnam, brought into the country along with shipments of meat.

O’Yadaw district is on the border with Vietnam, where African swine fever was first reported in February.

“We consider it a disease that isn’t transmitted from animals to humans, so there’s no problem with eating [pork]. I want to make this clear,” Phannara said.

Mong Reththy, a businessman who heads the Mong Reththy Group and owns a large pig farm, said farmers were working together to share information.

“I’ve helped about 120 small-scale farm owners. I’ve been careful since before the outbreak, and I invited them to come in and gave them advice,” Reththy said.

Sam Pitou, an adviser at the Cambodian Center for Study and Development in Agriculture, said pig and pork imports from Vietnam should be blocked.

“If it’s not strictly prevented, it will cause problem for pigs in Cambodia,” Pitou said.