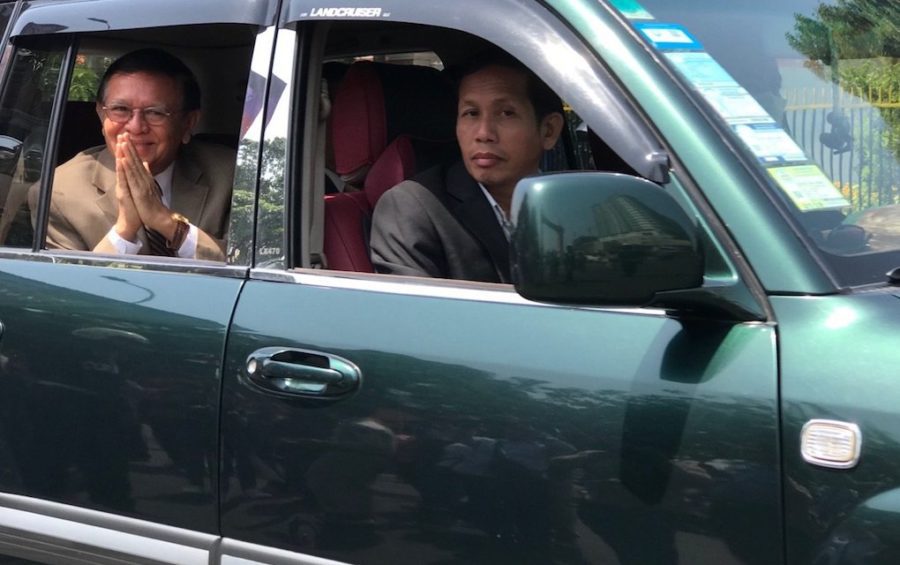 Defense lawyers called a deputy prosecutor immoral and unprofessional for an example he made in court using former opposition leader Kem Sokha, as lawyers’ debates prevented the judge from reaching a decision about acceptable evidence.

Sokha’s trial continued on Wednesday after a week off, with lawyers resuming debate on what evidence could be used to inculpate or defend the former CNRP leader. He is facing charges of colluding with foreign powers to orchestrate a color revolution.

In the three-and-a-half hour trial, lawyers spent too much time debating rules that presiding judge Koy Sao said he didn’t have sufficient time to make a decision on whether to strike some evidence from the trial.

In explaining his reason, Hong gave a hypothetical example, to which defense lawyers took issue. “For example, if Kem Sokha raped a woman on January 1, 2022 but if defense lawyers submit evidences by mentioning only January … how can [we] clarify whether he was in the country or overseas when the incident happened?” he said. “The time of the fact is really important.”

“Even though he [Kem Sokha] is accused, so far the court has not found him guilty yet,” Chen said. “The age of my client is also equal to being a father … or the uncle of the prosecutor. Please use words that are suitable to be used by Khmer children.”

Defense lawyers also disagreed with the crux of Hong’s argument — that evidence needs an exact date — and Sopheary responded that the prosecutors must also be more specific about the dates when Sokha committed alleged crimes.

“When the prosecutors show which dates [the alleged crimes occurred], then I will find evidence to exculpate [Sokha]. Criminal charges need to have time and date and even showing the kind of clothes worn,” she said, suggesting the level of detail needed for evidence to be effective.

Defense lawyer Ang Udom also took issue with the court’s decision to stall last week’s hearing after prosecutor Plang Sophal tested positive for Covid-19 on March 4. He claimed that others could have participated in the trial while Sophal was sick, so it was an unnecessary delay.

“Requesting a break for everyone is not right. It affects the rights of excellency Kem Sokha and [the court] should stop doing this,” Udom said.

Presiding judge Sao, however, asked the defense lawyers to take the Covid-19 situation seriously, saying it was disrespectful to prosecutors’ rights.

“How can you know when it will not infect or not [transmit],” Sao said. “Not respecting the health measure is a crime. [You] can’t make light of it.”

Before his first trial session this month — more than two years since the saga began — Sokha called for a resolution via dialogue.

As Wednesday’s trial headed toward the noon recess, Sao noted that he did not have time to evaluate each parties’ claims about what evidence to accept or scrap from the case, saying he would need another hour. He said this would resume at the next scheduled hearing on March 23.