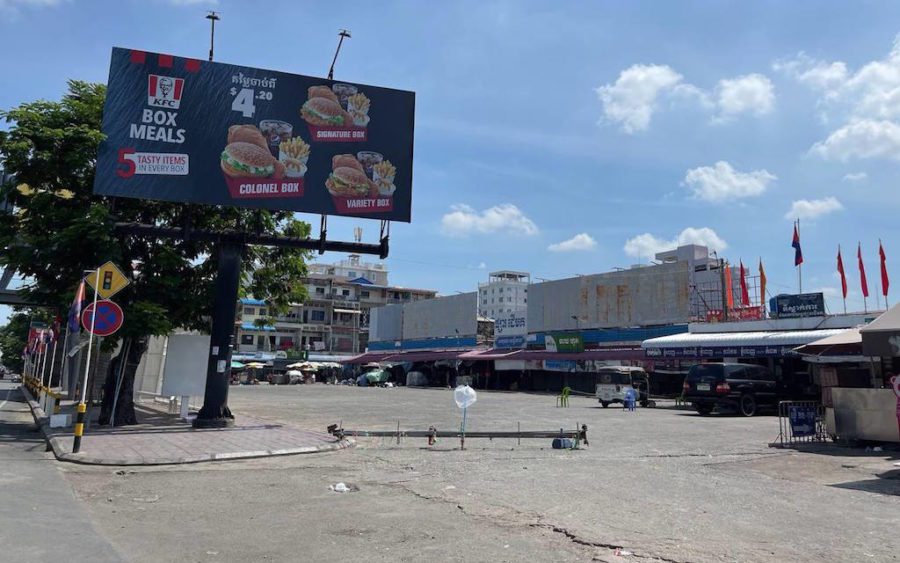 A Ministry of Health photograph shows the Doeum Kor wholesale market completely deserted on Wednesday after it was shut to stop the spread of Covid-19 in Phnom Penh.

Some vegetable growers in Kandal province say their produce is rotting in their fields as Phnom Penh markets are shut down for the Covid-19 lockdown and traders face a crackdown by continuing to sell in violation of public health measures.

Stung Meanchey is part of Phnom Penh’s “red zone,” where the Commerce Ministry has taken over the supply and distribution of all food products in an effort to curb the spread of Covid-19.

Markets were springing up just outside the red zones, particularly under the Stung Meanchey flyover, said one vegetable seller, Chan Puthysak.

Vendors had been pushed from place to place as they have tried to stock up on supplies and continue their business despite the lockdown, Puthysak said.

On Thursday morning, wholesale trade happening on the outskirts of the city in Chbar Ampov and Chroy Changva districts were shut down, he said.

“It is very difficult for us to sell because we have been banned from selling and buying. Due to the travel restrictions, sometimes it takes longer to deliver the vegetables to buyers, so the buyers leave without buying and we have to throw away our vegetables,” he said.

A video circulated on social media this week showed police cracking down on vegetable vendors on Street 271 carrying produce on the backs of motorbikes, trucks, tuk-tuks and trailers in an improvised market.

In the video, one traffic police officer throws a bag of vegetables into a police car. “Do you know how many days I’ve banned [this]? We’ve banned you from selling,” the officer says.

The disruptions in the capital are now being felt on vegetable farms in Kandal province’s Sa’ang district, said farmer Tai Song on Wednesday.

“The traders and vendors who come to collect, buy and resell, they’ve been caught and are being quarantined,” Song said.

About 10 tons of his lettuce — and more than 200 tons in his village — were gradually rotting without a market, he claimed.

“There is no place to sell, so the farmers are completely lost and there are only tears,” he said.

Another farmer, in Kandal’s Koh Thom district, Sem Phea, said the situation was largely the same in her area.

“When taking [the produce] to Phnom Penh is not possible, the vegetables get thrown away in the district,” she said.

Theng Savoeun, president of the Coalition of Cambodian Farmer Community, said he hoped a solution could be found to bring farmers’ produce into the locked down cities of Phnom Penh and Takhmao.

“They may face a serious problem with their incomes,” he said. A safe area should be set up to allow trade to continue, he said.

In thousands of messages, Phnom Penh residents have asked City Hall for emergency food aid due to loss of income as businesses have been closed down. In Phnom Penh red zones, residents say they have bought and sold food in the middle of the night to evade authorities’ patrols.

More than 20 Phnom Penh markets have been linked to coronavirus cases, and at least 13 were closed down as of Monday.

The government has distributed rice, noodles and canned fish to areas in need, but some residents have spoken of facing food shortages.

The country currently has more than 5,000 active cases of Covid-19 as part of its worst outbreak to date.