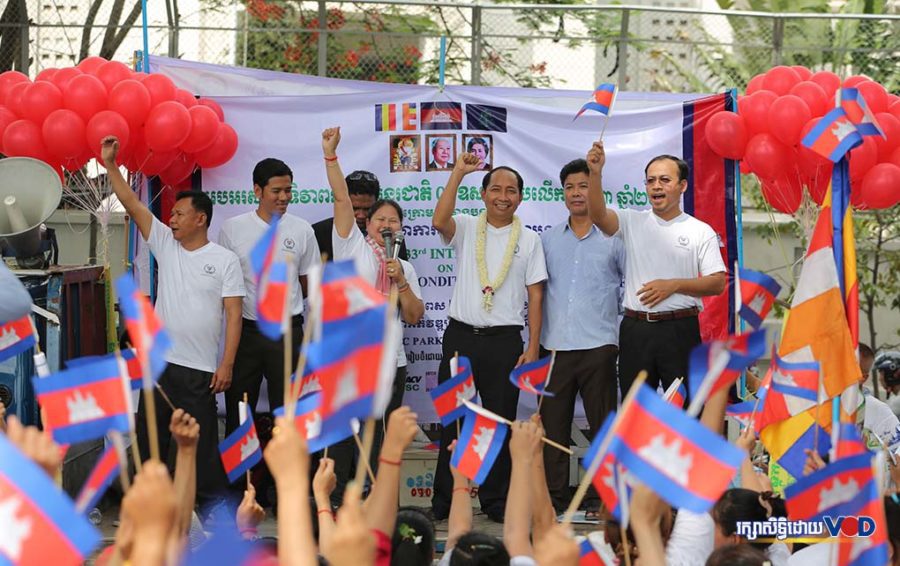 Workers chanted slogans and unfurled banners outside the Council for the Development of Cambodia building in Phnom Penh last week.

The building — standing between the capital’s iconic hilltop pagoda Wat Phnom and the Tonle Sap river — has become a gathering point for relatively contained labor rallies in the past couple of years, as civil society’s penchant for sweeping marches across the capital became increasingly suppressed.

He promised to do the same on International Labor Day last week, but his vow of defiance seemed to lack conviction.

“We will still stick to our program and we will see how it actually goes and how far we are able to march,” Thorn said in the preceding days. “Then we will stop marching.”

The ensuing “march” — of between 1,000 to 2,000 workers — was merely one lap around the block, as a few police officers on-guard tinkered with flimsy metal barriers. It typified the circumspection that has permeated labor movements and civil society groups over the past two years, as the ruling party dismantled the political opposition and clamped down hard on critical voices.

Still, it was a step further than the previous year. Confronted by 100 police officers and Daun Penh district security guards, workers likewise rallied at the Council for the Development of Cambodia (CDC) last year but acquiesced to municipal orders that they stay put.

Sun Dy, a laborer at the QMI B garment factory in Phnom Penh, last week said that he had come to this year’s International Labor Day rally to show his disappointment at the undue pressure he said his factory was putting on its workers.

“At my workplace, supervisors and administrators put pressure on workers both senior and junior, with coercion, threats and warnings,” Dy said.

He gave the example of workers occasionally asking to leave early.

“They asked, but the supervisor wouldn’t allow it — and instead warned them that they would be fired at the end of their contracts,” he said.

Chheang Vanna, from the capital’s W&D factory — which made headlines this year for a workers’ strike that led to mass firings — said that even though the workers were recently reinstated, the factory mistreated those who had protested.

“If we ask permission for leave because our mother is sick or our children are sick, the factory replies that we aren’t doctors so what good would it do for us to go?”

Vanna said she felt oppressed by management, and reveled in the opportunity to speak out in solidarity with other workers.

Reporters could not reach the factories for comment. However, Kaing Monika, spokesman for the Garment Manufacturers Association in Cambodia, denied that workers were under any particular pressure, and said their rights had plenty of protection under the law and from civil society groups.

“What pressure? We need evidence of it to confirm it,” Monika said.

The clout of the garments sector — employing about 800,000 people, and making up 74 percent of the country’s total exports — has put its workers at the center of the country’s development, both economically and politically.

They were part of massive street rallies in 2013, which dovetailed with the opposition’s surprise surge in the national election that year and subsequent protests alleging voting irregularities. The protests culminated in a deadly shooting in January 2014 when military police opened fire on protestors, killing five.

Since, the ruling party has courted the sector’s support with repeated rises in garment workers’ minimum wage, while Prime Minister Hun Sen has made regular visits to factories to promise reforms and distribute gifts of cash.

On International Labor Day this year, Hun Sen attended a celebration organized by the Yi Da Manufacturing factory in Kandal province to hand out almost $50,000.

The prime minister said more than 1,200 factories held similar celebrations on the day with food and dancing for their workers.

Hand-in-hand with attempts to win over workers, however, the government has also enacted a controversial Trade Union Law criticized as preventing workers from organizing, while at many workplaces government-backed and corporate-sponsored unions that have pushed out independent unions.

Union leaders have repeatedly complained of harassment and intimidation from authorities, and several have been taken to court over years-old charges.

The result was a relative pacification of the country’s labor movements, with the number of strikes plummeting by half in 2018.

Last week, union leaders prepared a petition with a list of 20 ambitious demands: increase garment-sector wages to $250 a month, establish a minimum wage for all sectors, drop charges against unionists, and stop using the courts to suppress labor movements, among others.

National Assembly representative Suon Rindy accepted the petition on a stage set up outside the CDC and spoke about trying to meet the needs of the assembled workers.

“Our workers’ needs are always in a race with development,” Rindy said. “It always falls short. It’s always left behind. It always has needs, such as what have just read — all these 20 points.”

Thorn, leading the rally, said that — as usual — it was unlikely the government would actually be receptive to the suggestions.

But it also appeared that the winds might be shifting, he said.

“Starting from this year, there may really be some changes, because the government has been paying more attention to workers,” Thorn said.

The W&D strike earlier in the year showed courage and organization, and Hun Sen’s personal intervention to end the dispute was a sign of attentiveness.

“Workers are more educated than before,” he said. “The government and leaders of the National Assembly have to pay attention.”

Thorn spoke to the rally of what appeared to be about 1,000 workers — though organizers claimed the total was closer to 2,000. Clusters of bright red balloons were scattered among the crowd.

“If [they] don’t pay attention, they will lose the workers’ support,” he said, “because there seems to be an escalation compared to the last three or four years.”