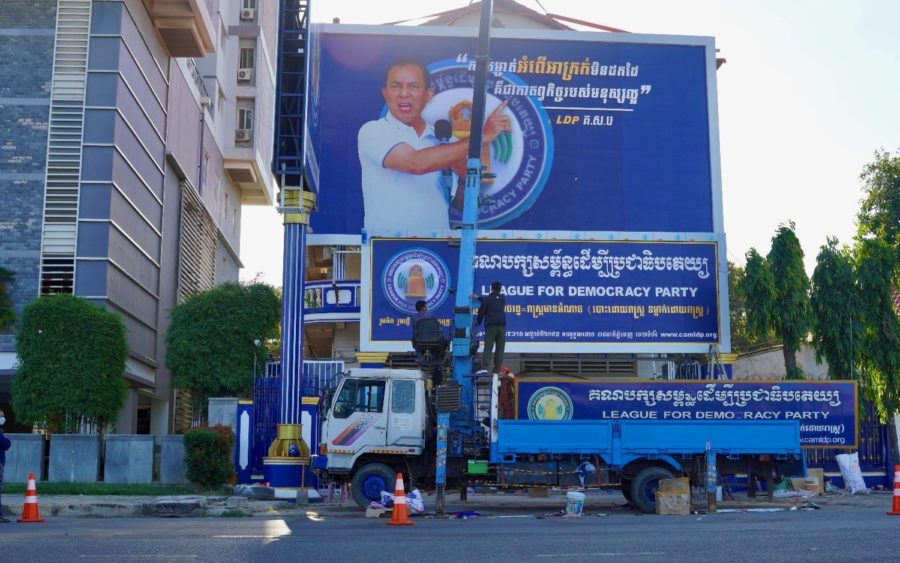 A well-established minor party known for its ardent supporters and its leader’s unorthodox, at-times harsh rhetoric has dropped out of the upcoming commune elections.

The League for Democracy Party, founded in 2005, put forward candidates in more than half the country’s communes in the 2017 local elections — or 844 communes out of 1,646 — and won around 5 percent of the vote in the 2018 national election.

But it is boycotting the 2022 vote, the party said in a press release over the weekend, citing disagreements with the National Election Committee over how to validate votes at polling places.

Several parties previously raised concerns over the NEC moving to withdraw “Form 1102” from polling places. The form was used to show immediate vote tallies to participants. However, the NEC backtracked in February, saying it would revert to using the form in the upcoming elections.

In addition to the press release’s complaint, LDP spokesperson E Sangleng on Monday alleged fraud as well as threats against its members during the electoral process, without giving exact details.

“This is the NEC cooperating with the ruling party to prepare the result in advance and this is very serious and the LDP has clear evidence, we have videos and pictures and names but they sue us in court over this issue,” Sangleng said while also alleging interference in the “remote-controlled courts” and the strategic relocation of soldiers and civil servants to register to vote for the ruling party in key communes — but declined to provide the evidence, saying he wanted to avoid further trouble.

He said the party was “persecuted” behind the scenes and the persecution had reached intolerable levels.

“Who wouldn’t want to participate since we have created the party? What is the point of creating a party? But when it reaches this phase it cannot be tolerated.”

The outspoken LDP has made waves in the past for criticizing alleged corruption in the monkhood and saying it wants to create a new country. In 2017, the NEC warned the party for allegedly making online posts criticizing other parties despite a campaign blackout 24 hours before polls opened.

NEC spokesman Som Sorida said the LDP did not have strong grounds for boycotting the vote, especially as the election would retain Form 1102 but print fewer copies at each polling station. One copy would be posted at each polling place so all parties could see and photograph it as needed, he said. Another would be sent to the commune to tally votes, while a third sent to the NEC for safekeeping, he added.

“In terms of the technicalities there is nothing hidden. It is transparent, and implements and respects … the Commune Council Election Law,” he said.

Sorida said that in the past election staff had made more copies, but it was done by hand and prone to error. Vote counting was done publicly, so parties could also bring pen and paper themselves, he said.

“The NEC regrets [the withdrawal of] the LDP, which has always participated in all elections, including the national election and sub-national elections. But this reason is not enough to boycott,” he said of the complaint in the party’s press release, noting that other complainant parties would participate in the vote.

Of the LDP’s other allegations of fraud and threats, Sorida said the LDP had filed a complaint about soldiers’ registrations, and the case reached the Supreme Court. However, the court ruled against the LDP.

The NEC had also filed a lawsuit against Sengleng, the LDP spokesman, about insulting national institutions by saying the NEC was a thief, Sorida said, but laughed off accusations that the NEC was threatening political activists.