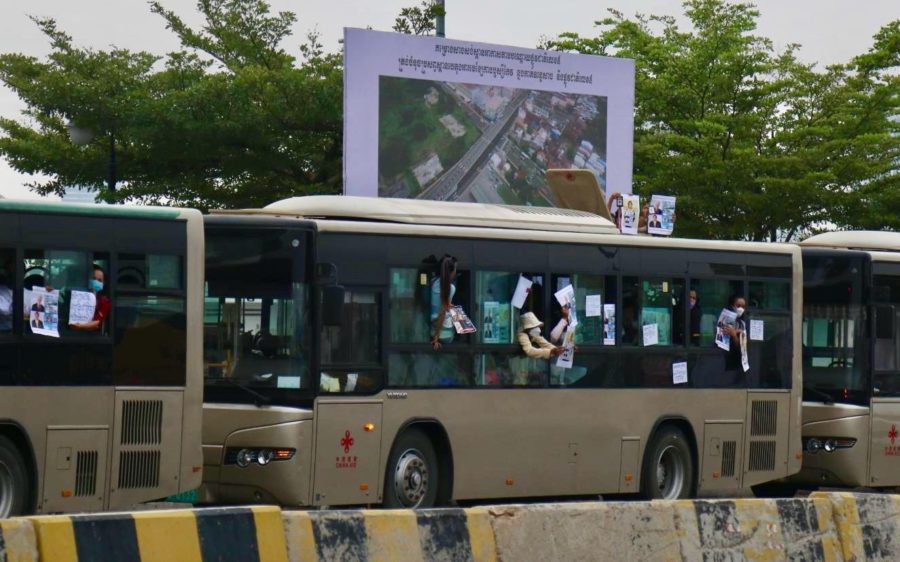 NagaWorld workers hold posters from the windows and roof of the buses their were being held in at the new Freedom Park in Russei Keo district on March 18, 2022. (Licadho)

After months of near-daily striking, negotiations resumed in the NagaWorld labor dispute on Friday, though workers said little progress was made.

The Labor Ministry hosted worker representatives and the casino corporation for negotiations on Friday, a potential step towards ending the stalemate in the long-running dispute. The meeting came after 11 union leaders and workers were released from prison on bail this week to facilitate the negotiations.

Sun Sreypich, one of the worker representatives, said there were “no good results” to report from the meeting and that the ministry was focused on ensuring “unity” as negotiations proceeded.

“Today we don’t have positive results yet but the ministry is preparing the next meeting, at which point we should resolve problems,” she said.

Chhim Sithar, the union’s president who also attended the meeting, said the ministry only laid out the dispute resolution procedures, including the arbitration process.

The meeting would resume on Monday, Sithar said, and the ministry wanted to focus on a ruling by the Arbitration Council, but that workers would continue to push for reinstatement and dropping of charges against union leaders and members.

“If we do not drop the charges, we cannot accept that. This is our position that the ministry addresses these points,” she said.

Last year, the Arbitration Council refused to rule on the mass layoff of more than 1,300 workers, and had punted the decision to the Labor Ministry’s inspectorate. The council only directed the casino to correctly calculate seniority pay, unused annual leave and indemnity payments.

Early on in the strike, workers said a NagaCorp representative had suggested the company’s board of directors would consider reinstatement demands from around 300 workers who were holding out from accepting compensation packages to return to their jobs.

The Labor Ministry released a statement Friday evening, suggesting that the parties hold three meetings to resolve the dispute. The statement adds that the union requested that charges against the 11 released workers be dropped and to consider the reinstatement of fired workers, whereas NagaWorld said they regretted that the protests were continuing even though union leaders had said they would ask workers to end their strike action.

The 11 union leaders and workers had signed letters, released earlier this week, asking for bail and asking other workers to end the protests to facilitate negotiations. Protesters have refused to comply with their leaders’ requests so far.

Labor Ministry spokesperson Heng Sour pointed to the statement when asked for comment on Friday.

Even as the negotiations were taking place, more than 100 protesters were again rounded up from outside the NagaWorld casino and taken to the new Freedom Park in Russei Keo district and kept in public buses for over four hours. Workers were still being held in the buses as of 7 p.m.

Tim Satya, one of the workers, said they didn’t know why the buses had stopped at Freedom Park or why workers weren’t allowed to disembark. Until Friday, protesters appearing near the casino had been bused to a quarantine center in Prek Pnov instead.

“We haven’t gotten off the bus. We are on the bus and standing and screaming from the bus,” she said.