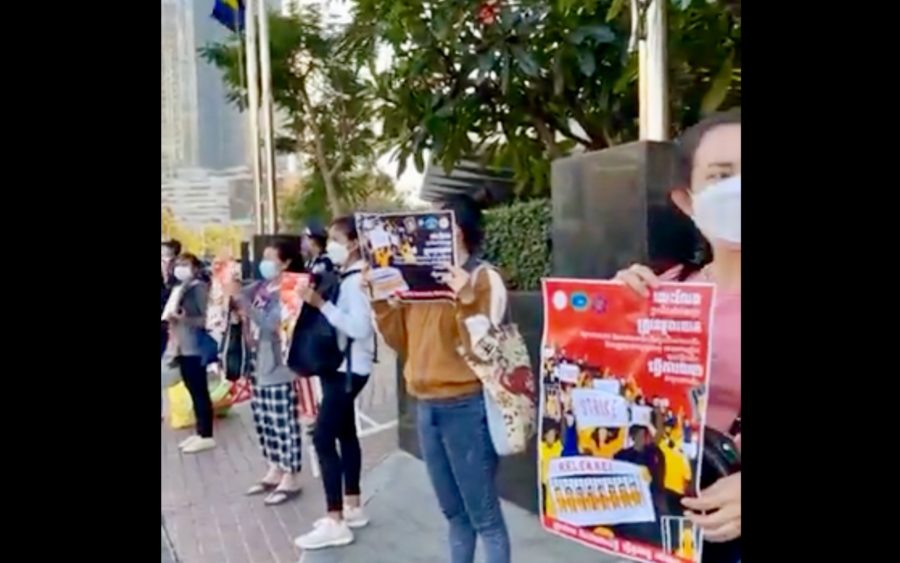 Sixteen NagaWorld strikers reached the front step of the casino complex — the closest they got to the company’s buildings in weeks — and held banners there Wednesday evening before being shoved into a city bus by police and carted away.

The strikers had reached the Australian Embassy at about 4:50 p.m., much later than they usually congregate, and walked to the NagaWorld 2 casino at the Chhuon Nath roundabout in Tonle Bassac commune. Their approach was shown on Facebook livestreams broadcast by the workers.

The collected workers stood on the sidewalk outside the casino, held banners, and sang a song or two. Around them, casino security scrambled to put up barricades while plainclothes police officers called in the strike. Within 20 minutes, PPE-clad police personnel pushed the 16 workers into a bus and drove them to the outskirts of town, to the same Prek Pnov quarantine facility officials had used in days prior.

The 16 workers who made it to the NagaWorld steps were among approximately 50 total strikers detained by police Wednesday, according to worker estimates. The day’s detentions were the latest in this week’s police strategy to confront the striking union members and force them to test for Covid-19. Authorities have pointed to Health Ministry measures and the rise of the Omicron variant to justify the use of force to bring the NagaWorld workers in for testing.

Mam Sovathin, who was among the 16 workers detained Wednesday at the casino complex, said she has been tested for Covid-19 three times now by the authorities: Twice during a period of mandated testing of the strikers at Koh Pich demanded by officials earlier this month, and once on Monday at Prek Pnov, when she was part of the 64 workers who were detained that day.

“They cannot stop me this way because I already follow the health rules of Cambodia,” Sovathin said.

She was also upset about the police’s use of force.

“They touched me like a tiger bites a rabbit.  They focus on me because I’m the one [doing] the livestream.”

On February 4, the capital administration mandated the workers get tested for Covid-19, isolate themselves for seven days and test again, all after one worker in the group tested positive for the virus. However, that worker claimed they hadn’t been on strike since mid-January, weeks before they tested positive.

Besides the 16 detained at the NagaWorld steps, union members say as many as 35 of their peers were also detained Wednesday at about 2 p.m. near the Russian Embassy and Soho Mall, where the protests routinely took place before they were interrupted by the government’s use of Covid-19 measures.

Police also attempted to corral a VOD reporter — tugging at their sleeves — into the same bus, even though they were wearing an ID card for the Cambodian Center for Independent Media.

Authorities said they thought the journalist was a protestor but allowed them to monitor the detentions after acknowledging they were a journalist.

Police have been heavy-handed with journalists and observers during the course of the NagaWorld strike, with another VOD reporter arbitrarily asked to produce their passport by non-uniformed personnel on Tuesday.

Though most of the union members taken to the Prek Pnov facility have been allowed to leave, a detained worker named Ros Lyheng says 39 of the group who were detained on Tuesday still remain at the facility after being asked to pay fines of 5 million riel each, or about $1,250 per person.

Lyheng said the attending doctors and officials first tried to get four people, who tested positive Wednesday morning, to pay the fine. The four refused, he continued, prompting the authorities to try to get the rest of the group to pay the $1,250 fine.

“We said it was impossible because we did not do anything wrong, we do not accept the fine,” Lyheng said.

Phnom Penh City Hall released a statement Tuesday saying it had tried to get workers to comply with its health guidelines, but the strikers were insisting on continuing “anarchic” gatherings. The city’s statement added that workers would now face fines ranging from $250 to $1,250.

Phnom Penh city spokesperson Met Measpheakdey did not comment on the arrests or the fines, saying he would reply later, which he didn’t.