No Result From Meeting Between Union, NagaWorld at Close of Strike’s Fifth Day 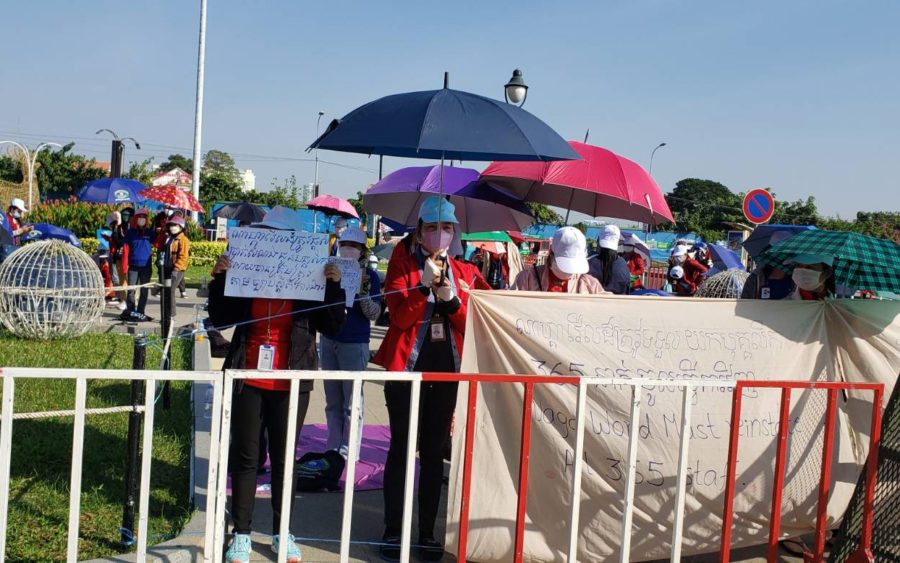 A worker stands behind the barricade with an umbrella and sign asking for NagaWorld to reinstate 365 terminated workers during the fourth day of a strike against NagaWorld’s alleged labor rights violations on December 21, 2021. (Danielle Keeton-Olsen/VOD)

The second day of negotiations between NagaWorld union organizers, the management of the Hong Kong-listed company and Phnom Penh city officials ended with no results as workers wrapped up a fifth, foggy day on strike in front of the casino complex.

Representatives of the Labor Rights Supported Union (LRSU) for NagaWorld workers began their strike Saturday with nine demands for NagaCorp, the parent company of Phnom Penh’s exclusively licensed casino complex, which laid off 1,329 workers earlier this year on claims of financial crisis. However, the past two days of mediation meetings between the company, LRSU and the city were primarily focused on 365 workers who did not accept the layoff and also dispute the way NagaWorld calculated their final compensation packages.

The union confirmed to the ministry on Wednesday that 317 workers requested to return to work at NagaWorld while 48 would accept their layoff, according to an update from the government. The Labor Ministry said it will continue meeting over the workers’ termination pay, which was reviewed during the meeting, from Thursday at 2 p.m.

Labor Ministry spokesman Heng Sour told VOD the ministry spent the afternoon reviewing the formula for calculating termination pay that the company used in May when issuing termination notices in order to decide if that process complied with the labor law. Sour said the ministry hasn’t reached a conclusion yet, but did meet with one worker who agreed to accept their layoff and compensation.

Sour did not address the workers who wish to be reinstated by NagaWorld or how the parties would manage that process.

“I believe that we will continue this meeting subsequently with representatives of the workers as well as with others who wish to participate in the meeting,” he said, without specifying when the next meeting will be.

“Since the dispute has started until now, the ministry never failed to accept the request for other parties to look into [the dispute],” he said.

LRSU president Chhim Sithar could not be reached Wednesday evening but Kleang Soben, a union activist, told VOD the union would have an internal meeting that night.

The Phnom Penh municipal court and city authorities have threatened action against strikers, including both active employees and laid-off individuals, since the labor protest began Saturday morning, but so far the strike has continued with almost no incidents.