Meetings played out behind closed doors on the first day of the Asean Summit in Phnom Penh on Thursday as a mass of Southeast Asia delegates, international reporters and Hun Sen’s gun-toting security force descended on the Sokha Hotel before the arrival of U.S. President Joe Biden and other world leaders this weekend.

Headlining the day’s events, according to Foreign Affairs Ministry secretary of state Kung Phoak, were Asean parties discussing how to implement the much-criticized five-point consensus in Myanmar as well as a decision on Timor-Leste’s membership in the bloc.

Phoak was vague about whether or how much Cambodia’s cross-border human trafficking — which in recent weeks have seen thousands of people freed or deported from scam compounds — could surface at the meetings.

When asked if Cambodia was asked to do more to investigate the online gambling and scam sector, he deflected focus from the Asean chair, saying human trafficking was a “transnational problem.”

“I think they’re asking everyone to do more to make sure that Asean is safe from these transnational crimes, and also intervene from some of these very bad situations, so again, it’s a regional commitment. It’s not about Cambodia or Myanmar or Lao or Thailand or Vietnam,” Phoak said.

All around the hotel’s premises, the setup seemed designed to project an air of security and comfort. Members of Prime Minister Hun Sen’s bodyguard unit donned full tactical gear as they positioned themselves near tanks and police cars. Caravans of SUVs and state TV trucks moved in and out of the two Sokha entrances, while hundreds of workers managed a mass catering system, scurrying throughout the hotel’s labyrinthic interior to tape down innumerable red carpets and arrange flowers. 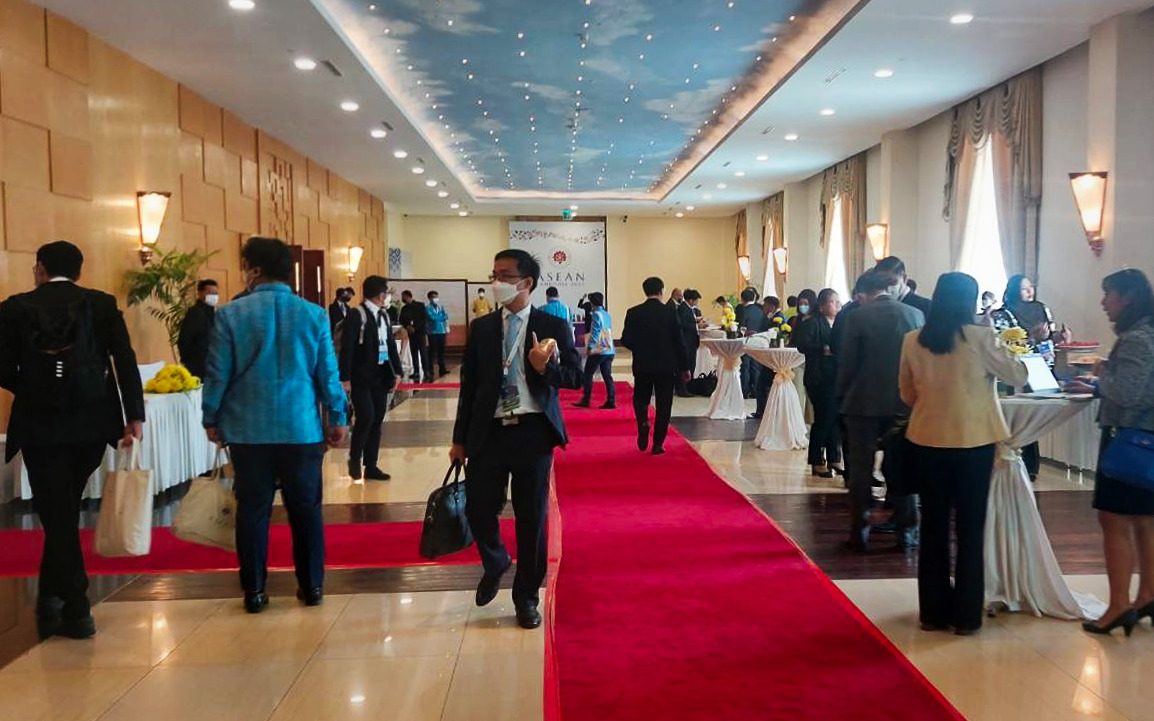 Outside the main hall at the Asean Summit in Phnom Penh on November 10, 2022. (Danielle Keeton-Olsen/VOD) 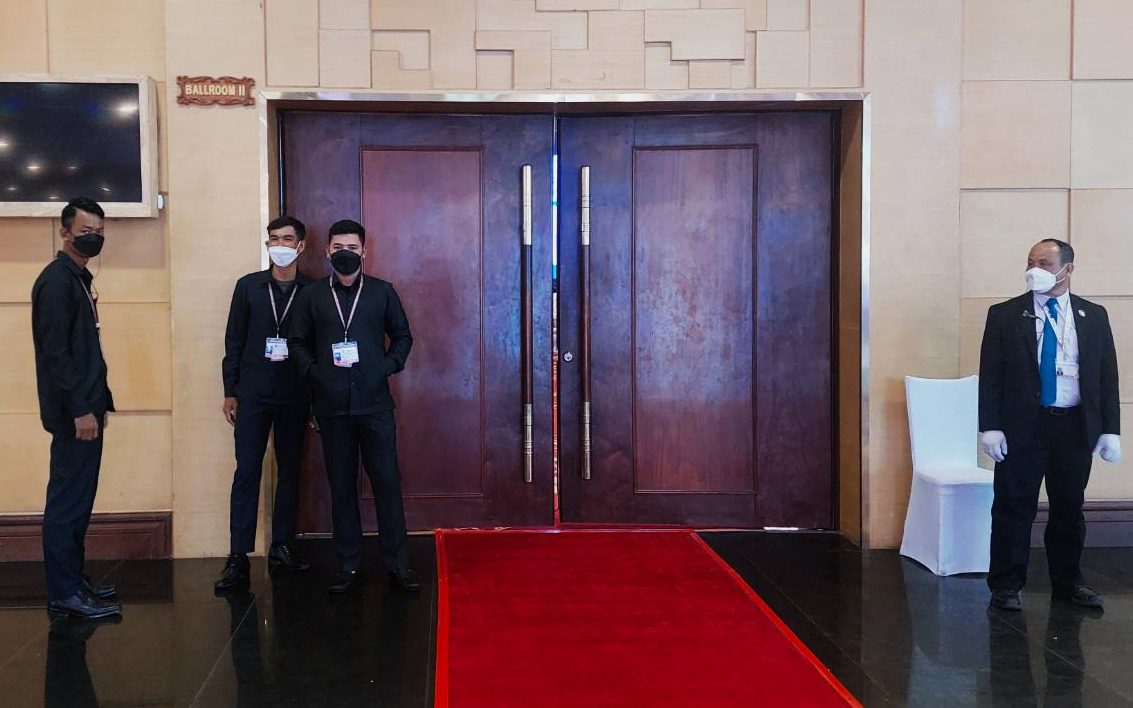 Guards at the main hall at the Asean Summit in Phnom Penh on November 10, 2022. (Danielle Keeton-Olsen/VOD) 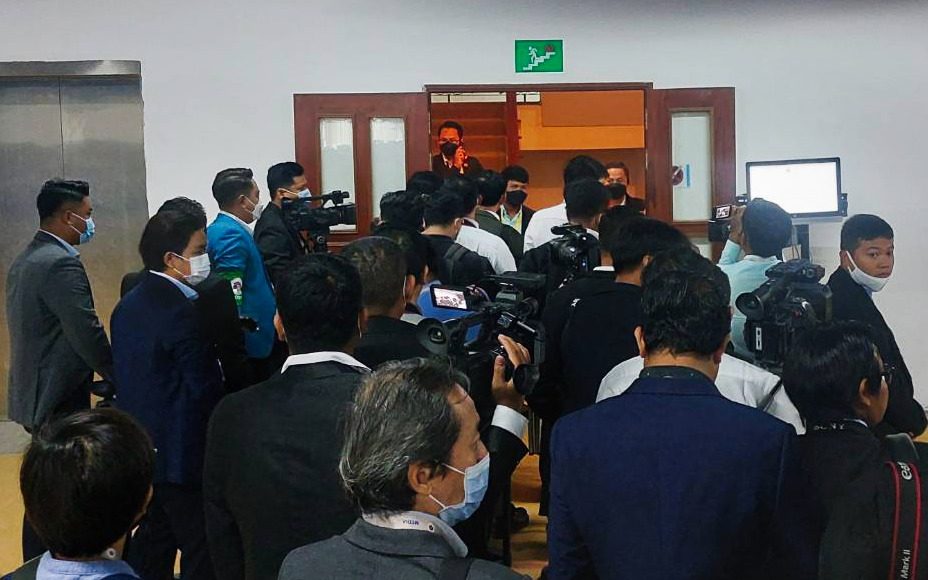 A crowd of photographers at the Asean Summit in Phnom Penh on November 10, 2022. (Danielle Keeton-Olsen/VOD) 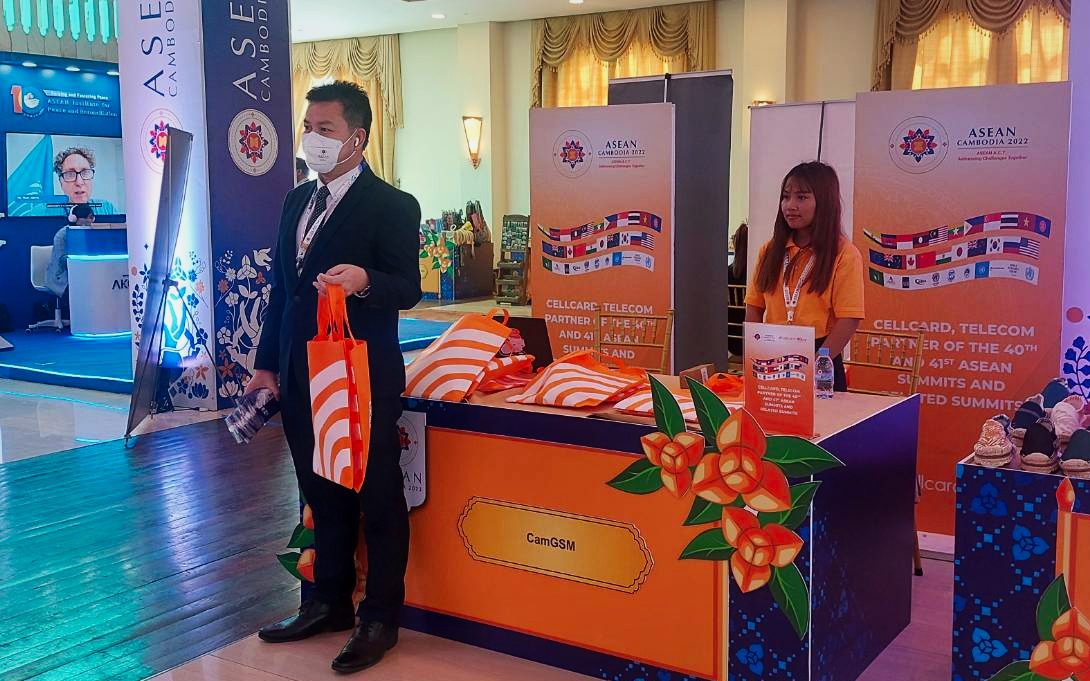 In a foyer near the ballroom where delegates nibbled on croissants and dragonfruit, a dozen Cambodian businesses displayed Khmer products and social enterprises, selling organic honey and cashews and krama scarves.

“I’ve met a few people that came from other countries,” said Peang Sokha, a sales manager for silk weaving group Watthan Artisans Cambodia who had been asked to attend by the Ministry of Foregin Affairs. In the weeks leading up to the event, several government officials asked her to make $500 silk suits. “They had to check our background, that we’re really a social enterprise that helps people.”

Bak Kimsreang, a sales representative for mango processing and export company Kirirom Food Productions, said her company had been contacted by the Council for Development of Cambodia to table at the summit and promote their export business abroad, giving fruit to officials to share at business exhibitions in South Korea and Japan.

The company is directed by Chhorn Dalis, who leads 10 other companies in food processing, travel and insurance.

“I don’t think this is an opportunity to sell, but it’s an opportunity to show our Cambodian products to other countries so that they know Cambodia can do dried mango,” she said, explaining that buyers at the Asean events often mistakenly believed the mango processing was done in China.

The desire to paint Cambodia as prosperous has been a theme for months leading up to the Asean Summit. Cambodia produced 25 Asean-themed luxury watches for world leaders at the event, a nod to Hun Sen’s love of exorbitantly priced watches and a new Prince Bank-connected horology school to train Cambodian watch-fixing experts.

In a speech last week, Interior Minister Sar Kheng emphasized that hosting Asean was a sign of esteem for Cambodia, seeming to reference how the country’s international image remains intertwined with the Khmer Rouge genocide.

“If we were a country that has war, instability and terrorism, poor security, they would not come because they are all world leaders,” Kheng said, adding that when the delegates and world leaders come like this, “it compares to bringing gold, diamond and silver to us.”

“You must understand, it is not to bring to samdech prime minister and not the leaders of the government … but to bring to the Cambodian people,” Kheng said.

Biden is scheduled to attend a bilateral meeting with Hun Sen on Saturday, though he has not indicated whether he will bring up human trafficking. In July, the U.S. downgraded Cambodia to the lowest ranking in anti-trafficking efforts, prompting officials to announce new plans to raid compounds and rescue survivors.

Cambodian activists have meanwhile tried to get his attention, with Cambodian-American lawyer Seng Chan Theary launching a hunger strike from Preah Vihear Prison and Candlelight Party President Teav Vannol calling on the American president in a letter to “ask for your intervention to urge the CPP-led government to stop all kinds of political persecutions, harassments, intimidations and threats.”

Phoak, the Foreign Affairs Ministry secretary of state, gave little indication of what was to come in the days ahead, speaking only in general terms about the Myanmar coup as an “enormous issue” and noting that delegates and leaders will “spend a lot of time discussing community building efforts, regional international issues, including issues in Myanmar, but also Ukraine and many of our other international events as well.” 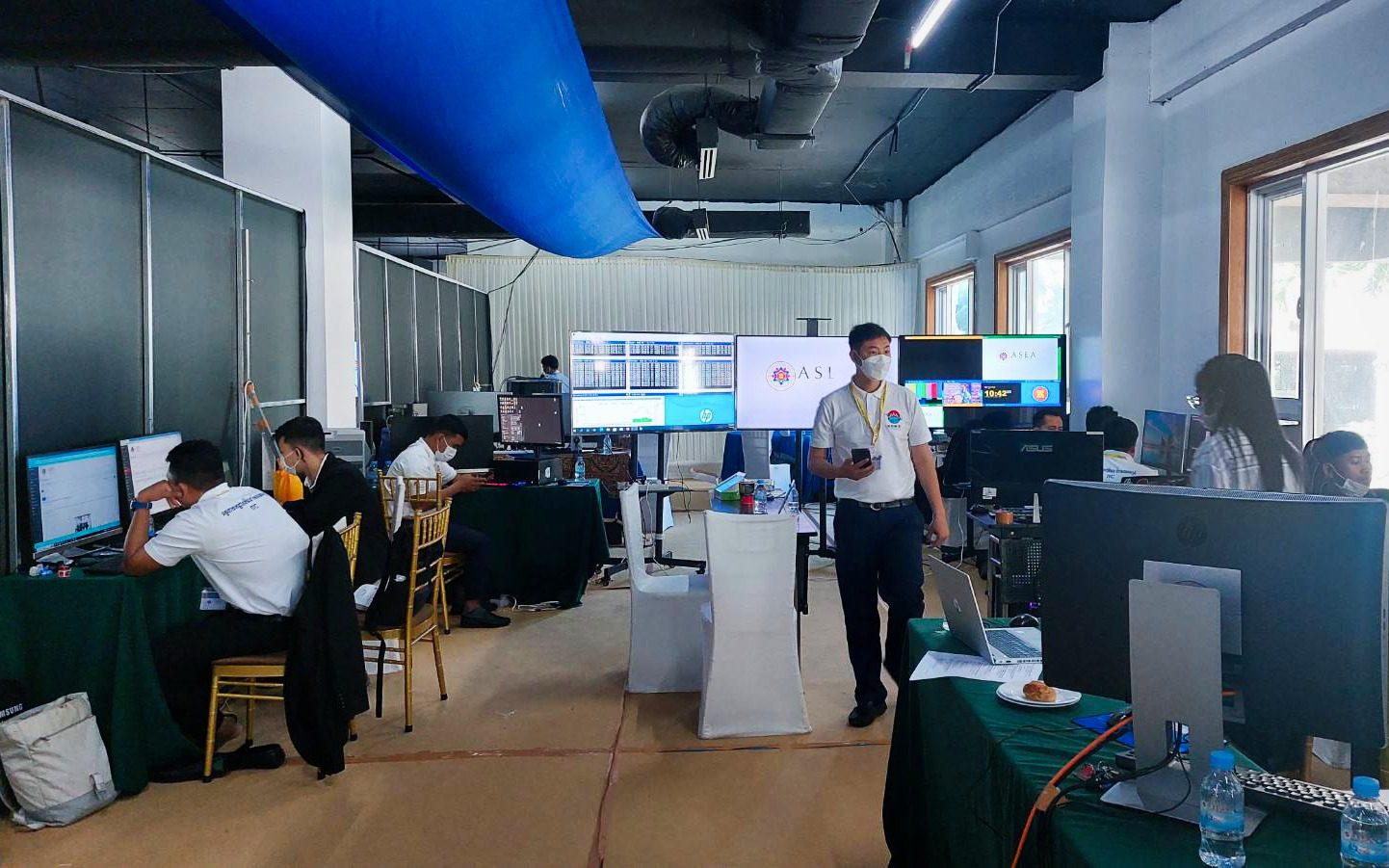 An IT center at the Asean Summit in Phnom Penh on November 10, 2022. (Danielle Keeton-Olsen/VOD) 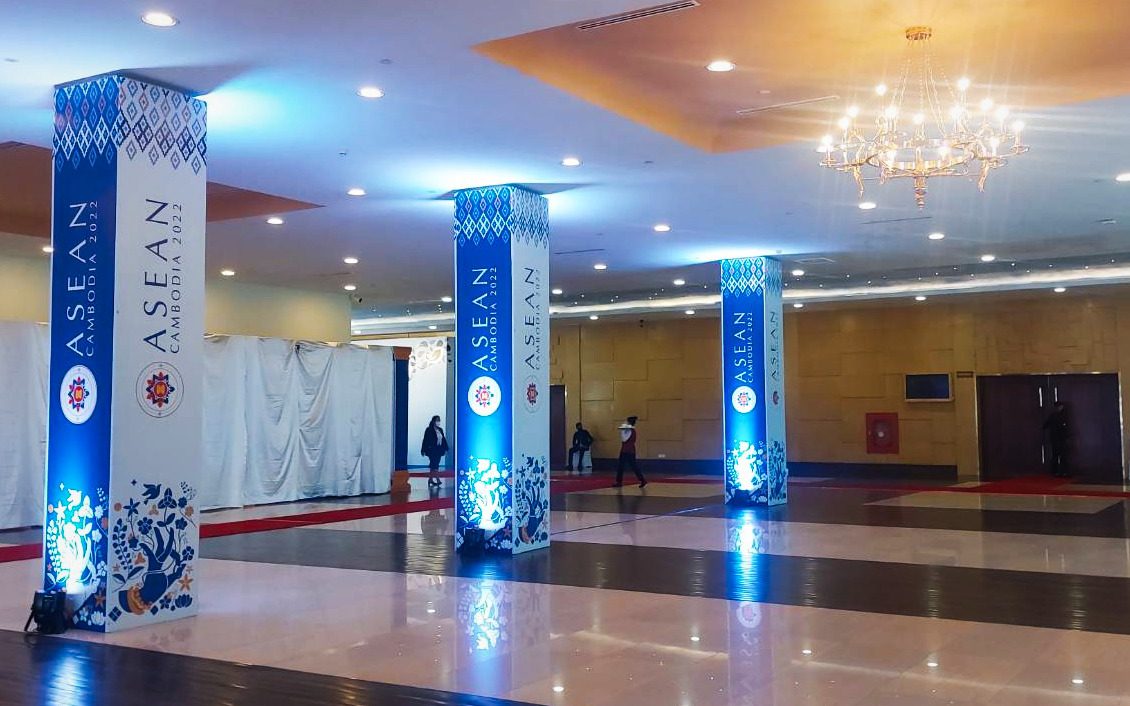 A hall in Phnom Penh’s Sokha Hotel for the Asean Summit on the morning of November 10, 2022. (Danielle Keeton-Olsen/VOD) 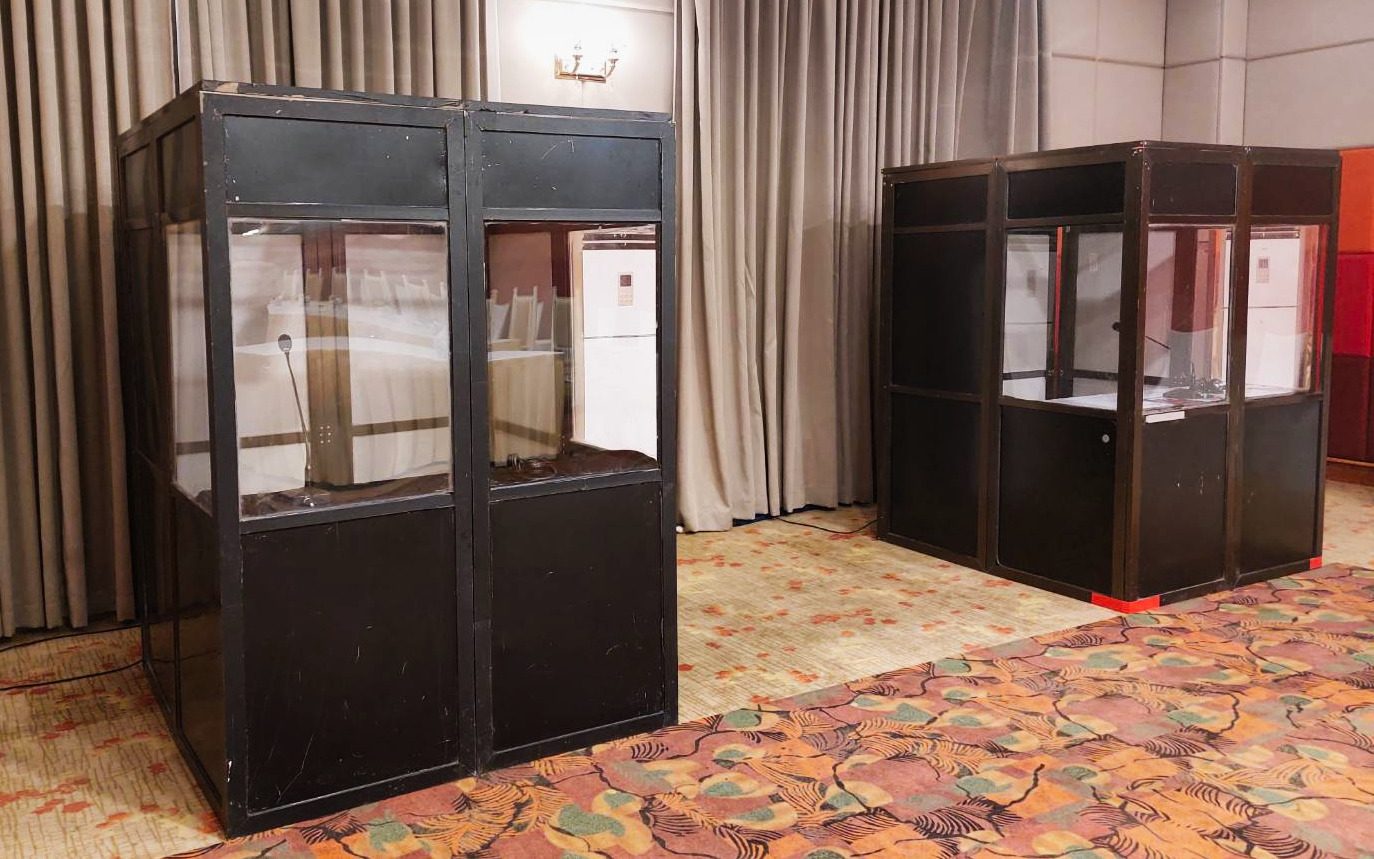 Translation booths at the Asean Summit in Phnom Penh on November 10, 2022. (Danielle Keeton-Olsen/VOD) 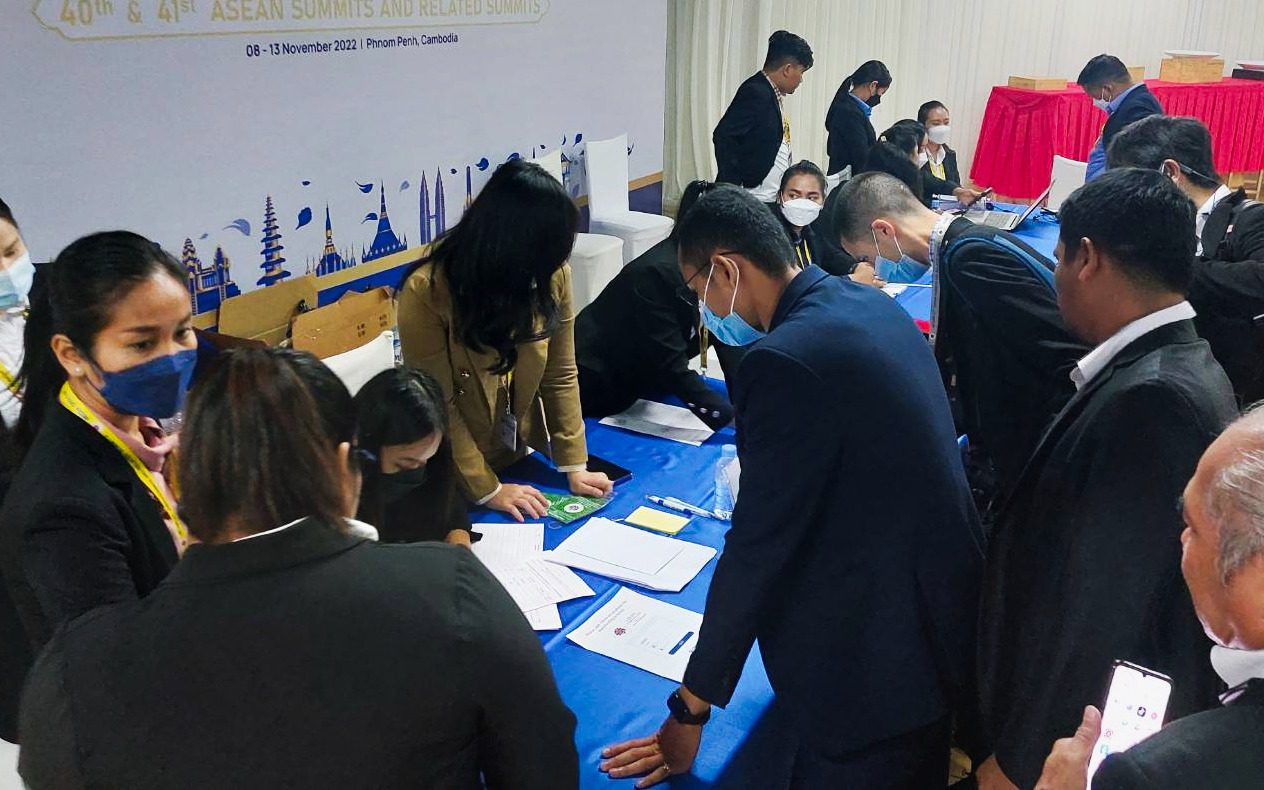 A sign-in desk for media members at the Asean Summit in Phnom Penh on November 10, 2022. (Danielle Keeton-Olsen/VOD)