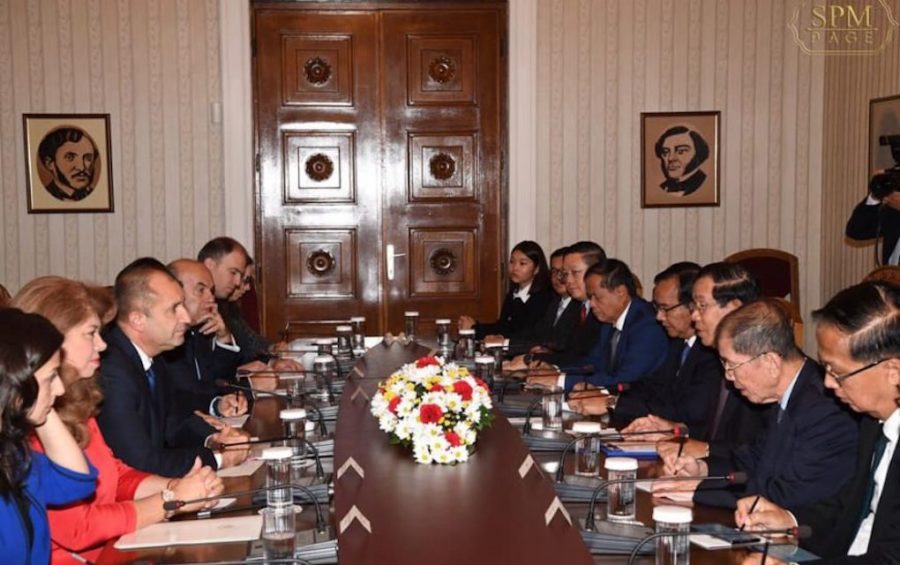 High turnout and the abundance of parties contesting last year’s national election showed it “went well” and democracy was “not moving backward,” Prime Minister Hun Sen said he told the Bulgarian president during a tour of Europe.

Hun Sen has been seeking support from central and eastern European leaders in a bid to avoid the suspension of E.U. trade preferences over Cambodia’s alleged “serious and systematic violations,” particularly of the right to political participation.

He posted on his Facebook page on Wednesday that while meeting Bulgarian President Rumen Radev, he had asked that Bulgaria “give justice for Cambodia” over the E.U.’s trade review.

“Currently, the process of democracy in Cambodia is not moving backward,” he wrote that he told Radev. “Specifically, the 2018 national election went well because more parties participated and there was a higher turnout of more than 83 percent.”

Twenty parties contested the 2018 vote. However, following the dissolution of the main opposition CNRP eight months prior, Hun Sen’s ruling CPP swept all 125 seats in the National Assembly.

In the days following the election, the E.U. issued a statement saying the election was “not representative of the democratic will of the Cambodian electorate, and therefore its outcome lacks credibility.”

The bloc embarked on a review of Cambodia’s access to its “Everything But Arms” duty-free trade scheme in February, saying “there is evidence of serious and systematic violations of core human rights and labour rights in Cambodia, in particular of the rights to political participation as well as of the freedoms of assembly, expression and association.”

A decision is due in four months.

Mu Sochua, vice president of the dissolved CNRP, said the fake election was neither free nor fair due to Hun Sen’s plot to “destroy” the CNRP.

“It started from the arrest of our president Kem Sokha, who has been imprisoned till today,” Sochua said. Sokha, who was arrested in September 2017 over accusations of colluding with the U.S. to overthrow the government, remains under de facto house arrest in Phnom Penh.

“All this [led to] a fake election, neither free nor fair, which the European Union, the United States condemned and did not accept,” she said.

Korn Savang, a monitoring coordinator for the Committee for Free and Fair Elections in Cambodia, said it was not enough to have many parties contest an election. There needed to be transparent competition and no political threats, Savang said.

“An important matter in 2018 was the exclusion of the political party that was the main competitor,” he said.

Hun Sen has also visited the Czech Republic and Hungary during his five-day trip, saying he sought support over the EBA review from the leaders of both countries, and claimed Hungarian President Janos Ader supported his request.