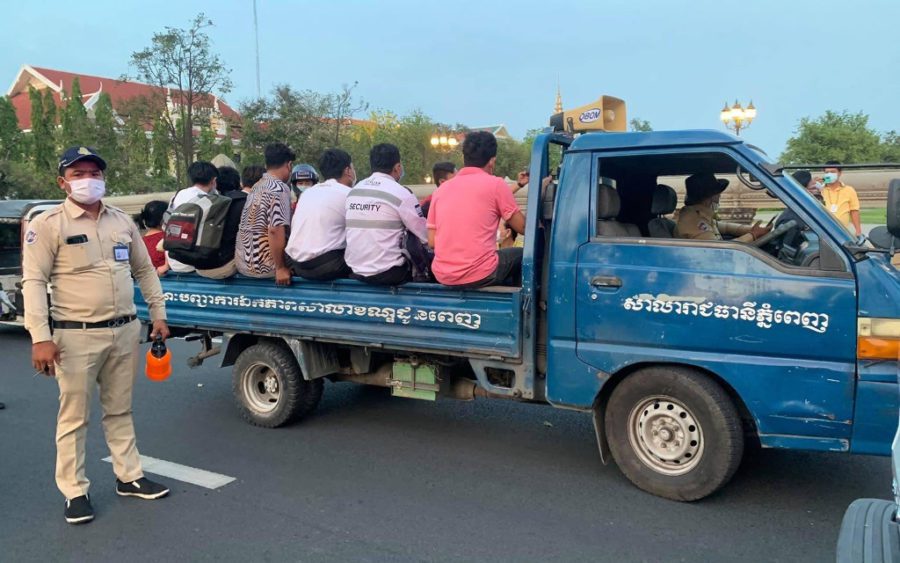 Daun Penh authorities truck away violators of Covid-19 lockdown measures, in a photo posted to the district administration’s Facebook page on April 20, 2021.

Daun Penh district authorities have been tolerant of Chhun Thorn, a cyclo driver, who sleeps in his vehicle near Ang Duong Hospital. The lockdown of Phnom Penh, where people aren’t allowed to leave their homes in most cases, has resulted in no income for the cyclo driver. He now relies on donations for his meals.

“Every day we eat from food donations because no vendors are selling at the market. Sometimes, people in cars or trucks or tuk-tuks come with food,” he said. “Last night, I did not have food since I did not get any donations.”

Cyclo and tuk-tuk drivers and people experiencing homelessness have been left exposed during the current lockdown of Phnom Penh and Takhmao city in Kandal province. It has also left many of them with no income, leaving them at risk of going hungry, some telling VOD they are having to skip meals.

During the lockdown, Thorn typically stands outside Old Market in Daun Penh with his cyclo until he is asked by district authorities to leave the area around 5 p.m. If he hasn’t received any food by then, he will go hungry.

“We sit there all day and when people feel sympathy, they give us some donations,” he said.

New rules for the lockdown, which have been extended to May 5, divide the city into three colored zones, with red zones continuing to have the most stringent measures preventing almost all movements outside the home.

Ngoun Sok, an 82-year-old cyclo driver, has not been as lucky as Thorn. He has had a few run-ins with local authorities who have asked him to move after he chooses a place to sleep — often using canes to threaten him, he said.

“They warn us that they will confiscate our cyclo and they intimidate and threaten us,” he said. “They do not know how poor we are — this is one issue. And another is starvation.”

He fears being arrested or detained by local police. A few days ago, his acquaintances, who are cyclo and tuk-tuk drivers, were taken away by the police, and he hasn’t seen them since, Sok said.

Informal workers have been some of the worst-hit communities during the Covid-19 pandemic — many have lost their incomes on account of the slowdown in tourism and economic activity.

Tong Sathai said he follows the rules and finds it hard to make money. The tuk-tuk driver, who works with rideshare company PassApp, said he has documentation that allows him to cross checkpoints set up across the city. Though some police officials accept the letter, others won’t let him cross into a new commune or district.

This means he is unable to distribute goods, food or ferry passengers, he said.

The tuk-tuk driver sleeps in his parked vehicle at Wat Botum park near Independence Monument and uses a public toilet to bathe. He has also struck a deal with a hotel security guard to allow him to bathe at the gates of a nearby hotel.

With cooked food hard to find, Sathai rides around looking for a working food vendor — occasionally skipping a meal or eating a bowl of packaged noodles.

Sathai said, “When the tires of your motorbike are not moving, it means that you are not making any money. We do not dare to spend on food when we do not earn.”

Bun Pech, another tuk-tuk driver, does not have the documentation needed to cross police checkpoints. He begrudgingly has to decline rides on his phone; every tap on his phone is lost income.

“When we do not dare to accept [rides], it means that we do not have money,” Pech said.

The driver spends his nights in Daun Penh district and has had to be stealthy to find a concealed location to sleep at night, he said.

“Now we have to find a hidden place to sleep because we are afraid the authorities and security guards will come to evict or arrest us.”