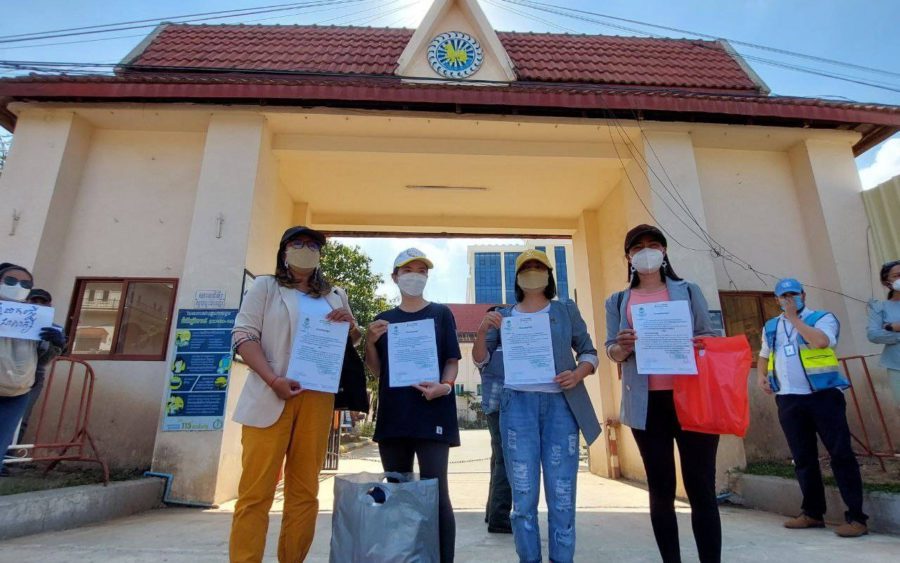 Four NagaWorld workers who were summoned to appear before the municipal police before Saturday were turned away on Friday and told their case was now with the courts.

NagaWorld workers have had their strike brought to an abrupt halt after local officials demanded they get tested for Covid-19 and self-isolate for seven days, after one worker tested positive for the virus. Even after finishing their mandated quarantine, workers have not said when or how they will resume their protest, which, according to City Hall, can now only take place at the new Freedom Park in the city’s outskirts.

The four workers — Sopheak Molika, Eng Srey Bou, Meng Kanika and Kheng Chanda — were summoned to appear at the Phnom Penh Municipal Police headquarters before Saturday for alleged violations of the Covid-19 Law.

Three workers were arrested the night of February 5 after they went to get tested at Koh Pich and jailed on the same charge, while nine others were charged with incitement late last year, with one worker being released on bail.

The workers were waiting outside the police office when a person in plain clothes took them inside the main gate where they were met by two officials who sent them back out. Around 50 workers were also present at the police headquarters supporting their colleagues.

Molika said they were informed that the case had been sent to the court and was no longer with the police. She said the summoned workers had to wait till today to comply with the summons because they were following Covid-19 regulations imposed on strikers. She said the four had been prepared to be detained.

“I am not scared because I have done nothing,” she said. “If they want to arrest me it means they are working beyond the [scope] of the summons.”

Workers tested on Wednesday said they were not given any further instructions on whether to stay home, but workers who were tested on Thursday told VOD they were instructed to do three additional days of isolation. Some workers continued to get tested at the Koh Pich facility on Friday.

Molika said there was no decision on whether to resume the strike and said they planned to continue their advocacy till the labor dispute was resolved.

Srey Bou, another one of the four summoned protesters, said she had come prepared with clothes and essential items in case the police detained them.

The worker previously said that she had not joined the strike since January 3 because she was busy preparing for her engagement in mid-January, and was surprised why she was included in the summons.

“I came here to make it clear to them that I haven’t joined the strike. I was busy and only spent time with my family,” Srey Bou said.

A Licadho lawyer representing the four said that since the case was with the court, they should return home and wait for a court summons. The lawyer said the police refused to acknowledge that the four workers had respected the summons.

Three hundred and sixty-five terminated NagaWorld workers have been on strike since December 18 and are demanding that the casino reinstate more than 200 of them and provide fair compensation packages to the rest. NagaCorp has said the layoffs were necessitated by the Covid-19 economic slowdown. The company posted a loss for last year, but also increased investment in a new casino complex in Phnom Penh.