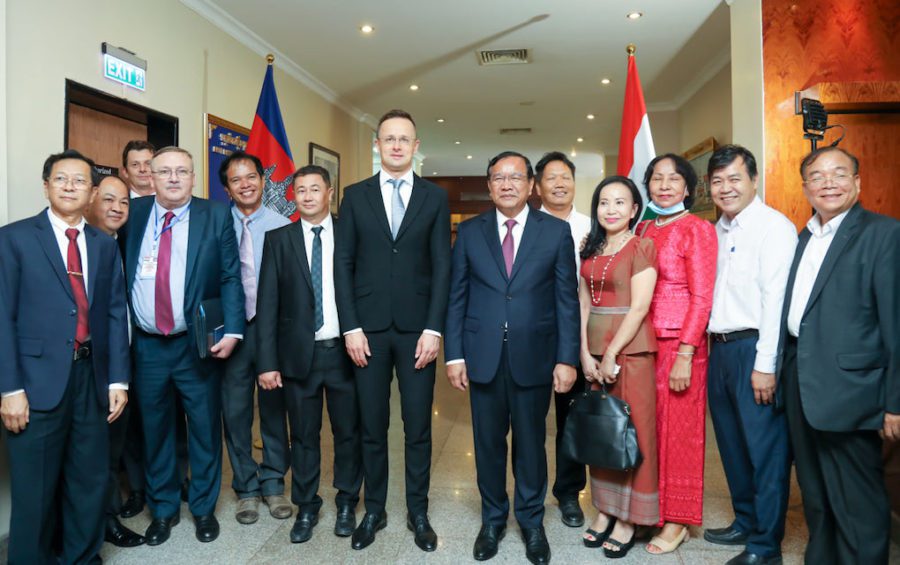 A Cambodian bodyguard who worked directly with a visiting Hungarian foreign minister last week tested positive for Covid-19 on his second test on Saturday, the Health Ministry announced.

The man, a 31-year-old living in Phnom Penh’s Sen Sok district, developed an itch in his throat and a cough in the days after his first test, and had a second sample tested at the Pasteur Institute, the ministry said in a statement on Sunday.

He was part of the Hungarian minister’s guard during the visit, the ministry said. He is now being treated at the Khmer-Soviet Friendship Hospital.

Testing of a total of 892 suspected contacts has been conducted as of Saturday, with just the one positive result, the ministry added.

Hungarian Foreign Minister Peter Szijjarto visited Cambodia on Tuesday. He had certificates attesting he was Covid-19 free, but did not follow required quarantine procedures, and tested positive for the disease after arriving in Thailand that evening.

On Saturday, Prime Minister Hun Sen shared an audio statement about the case on government-aligned Fresh News, urging the 900 or so people suspected of having had contact with Szijjarto to properly observe quarantine procedures.

They should be careful about having contact with family members, and should not be changing locations around the country, he said. Hun Sen himself is in quarantine for two weeks.

“[I] consider this a big public health issue as hasn’t happened in the previous 10 months,” Hun Sen said. “Nearly 900 people already, including children and wives at home, are part of this issue.”

However, the country would not be put in a state of emergency, he said, instead asking people to wear masks and observe social distancing.

“Please, together, start wearing masks and maintain hygiene during these upcoming two weeks before subsequent testing results come out,” Hun Sen said. “I consider this a serious issue for our country.”

The prime minister said he had asked Phnom Penh authorities to prepare quarantine locations at hotels for those who do not have appropriate spaces at home. The state would cover those hotel expenses, he said.

The Sokha Hotel in Chroy Changva district will be available for 14-day quarantine, according to a Health Ministry statement on Saturday.

The Education Ministry, meanwhile, urged parents who had direct or indirect contact with the Hungarian delegates to take their children out of school temporarily. In the statement, which was also released on Saturday, the ministry said educational institutions were taking action where necessary to prevent the potential spread of Covid-19.

The Health Ministry has asked those in quarantine to take a total of four tests, with additional testing on November 9, 14 and 18.

International experts have raised questions about Cambodia’s testing regime, saying there is a lack of transparency, and the low number of confirmed cases both in Cambodia and neighboring countries “just doesn’t make sense.”

In-country representatives for the World Health Organization, U.S. Centers for Disease Control and Prevention and the Pasteur Institute — which are part of Cambodia’s Covid-19 response — have not answered questions about testing data.