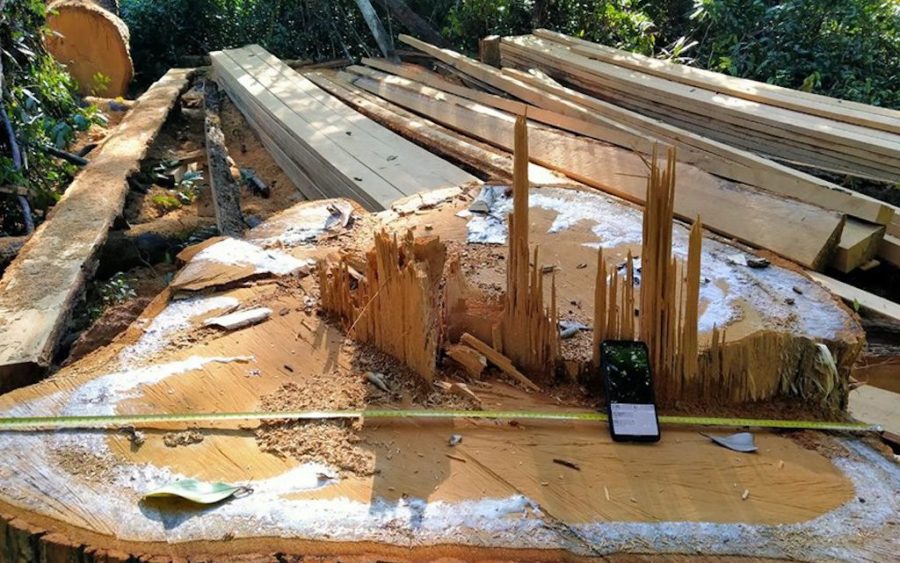 More than 100 incidents of logging, transport and processing were found by a community patrol over just three days in the Prey Preah Roka Wildlife Sanctuary in Preah Vihear province, as activists accused authorities of turning a blind eye to timber trafficking.

A community in Tbeng Meanchey district’s Prame commune said they patrolled the sanctuary’s forest for two nights and three days on August 17-19, and identified 101 forestry crimes.

They found stumps of 40 to 295 cm in diameter, including luxury wood; many sawn boards piled up in the forest; and active transportation and processing activities.

They spotted 15 tractors transporting timber out of the protected area, and 12 wood processing facilities operating in Prame commune.

Areas in Choam Ksan district were the most heavily logged, including evergreen and semi-evergreen forest, the community said.

They added that the transport was happening “without fear of legal action,” and wood processing “without suppression from relevant authorities.”

Expressing their regret over continued loss of protected forest, the community asked the Environment Ministry to allow local communities, youth groups, civil society and members of the public to participate in conserving nature.

The Prey Preah Roka Wildlife Sanctuary measures around 90 square kilometers, and when the protected area was established in 2016 was said to be home to elephants, gibbons and endangered deer. In the larger Prey Lang Wildlife Sanctuary, part of which is also in Preah Vihear province, community patrols have been banned and environmentalists arrested for trying to document illegal logging and deforestation.

Suth Savorn, head of the indigenous Kuy community that conducted the patrol, said the deforestation was killing wildlife and hurting the livelihoods of local people, who forage for mushrooms, wild fruit and other natural produce.

Savorn said he had seen park rangers in the forest, but forestry crimes were still happening daily.

“We observed a lot of deforestation. We went to patrol for just two nights and we found 101 cases. What about elsewhere?” he said. “I haven’t seen any effective measures taken yet.”

The community was concerned that Prey Preah Roka would be lost if authorities do not strengthen their measures, he said.

In July, Pheaktra said rangers have cracked down on more than 4,000 cases of illegal logging and other forestry crimes in the first half of the year, but they were only small-scale crimes and large-scale logging had been eliminated in the country.

Satellite data, however, points to tens of thousands of hectares of protected forests being lost every year.

Ma Chettra, a representative of the Cambodian Youth Network, said there was corruption between the perpetrators of forestry crimes and authorities. Rich and powerful people conspired with authorities to hire workers to cut down trees in protected areas, Chettra said.

“The government must take preventive measures in the field of natural resources. In addition, they must be open to the public as well as local communities to participate in patrols to help catch the perpetrators and punish them according to the law,” he said.

Traders who were buying the wood or hiring logging workers should also be targeted in law enforcement, he said.