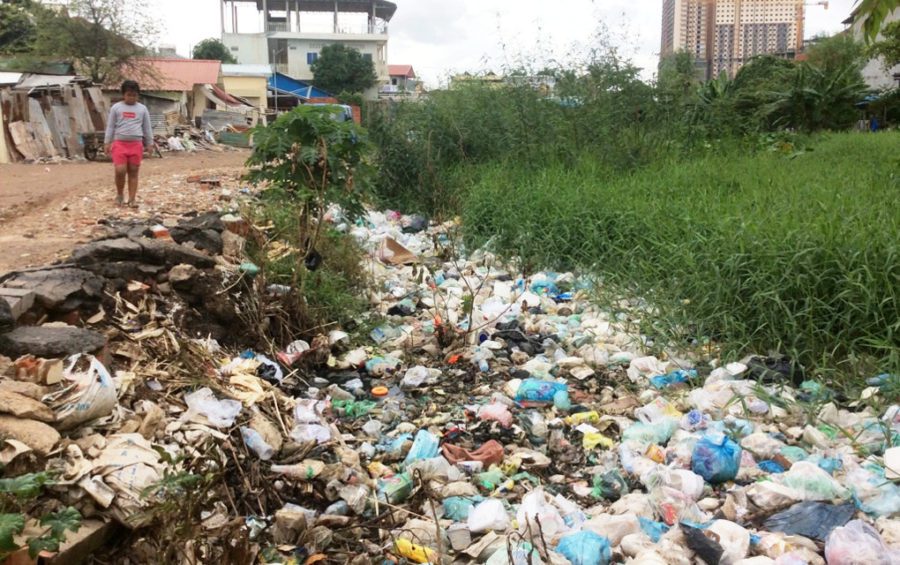 A canal near Phnom Penh’s Tuol Sangkae Thom market has been filling up with trash over the past year, with residents saying they are struggling with respiratory problems and mosquitoes as a result. The residents have demanded a cleanup, but local authorities last week blamed them instead for the pollution.

Near the market, the canal is completely covered with plastic bags, polystyrene foam, kitchen waste and more that are blocked from flowing further north by a mass of overgrown grass.

Not only is the trash pile-up creating bad smells across the neighborhood, but huge numbers of mosquitoes have started to swarm around the area, resident So Cheat said.

“There are a lot of mosquitoes that come from this canal every evening. My 6-year-old child got dengue five months ago because of those mosquitoes,” Cheat said. She has to be very careful about what the child wears and where she goes, she said.

Local authorities have sprayed insecticide on the trash, but it has not been enough — large numbers of mosquitoes still emerge from the pile every evening, Cheat said.

“I’ve gone to the hospital and the doctor told me to live in a better environment. But I can’t,” Sophy said, pointing to her home and small motorbike-washing business on the ground floor.

“I really want the authorities to clean this canal,” she said. “But not like last year.”

About a year ago, city workers took the trash out of the canal and put it on the road, blocking traffic and bringing the waste nearer residents, Sophy said.

Chim Sopheap, another resident living along the canal’s banks, insisted that the trash was flowing in from further upstream.

People in the immediate area were properly disposing of their trash, he said.

“Residents here always prepare their trash well because [waste management firm] Cintri comes to collect every day at 6 to 7 p.m.,” he said.

Instead, the trash came from surrounding areas, he said.

“When it rains, trash always flows down to here,” Sopheap said. Other people “do not dispose of their trash correctly.”

Residents wanted more cleanups and would be eager to help out, but they needed help from local authorities, who only act when the canal becomes completely clogged and blocks the flow of water, he said.

“It is not enough because there is a lot of trash. As a resident here, I would be happy to participate in the cleaning because it would be like cleaning my house,” Sopheap said. “But I cannot do it alone.”

Toul Sangkae commune chief Reach Phavoeun, however, blamed residents for the problem. She said commune officers cleaned the area every Saturday, but could not keep up with residents’ littering.

There are “large piles of this trash because people throw it there — sometimes along with religious materials such as coconuts and statues,” she said.

“We are tired every Saturday from cleaning the environment there, but people never help us. We collect [the trash] and put it in a big package, and leave it for Cintri to take,” Phavoeun said.

She added that commune authorities do not yet have a solution for the problem, but are trying to educate people instead of fining or prosecuting them.

Mean Phorp, a physician who studied at the University of Health Sciences, said trash piles near residences were a serious health concern.

They contained dangerous mixtures of bacteria and amino acids, which combined to produce carbon dioxide and methane and could cause various diseases, Phorp said.

“It affects our health through many means, including by air, via insects and your pets whenever you touch them,” he said.

“Trash also destroys the ecological system by causing water pollution,” Phorp added. “We will have health problems if we eat fish that live in that polluted water.”

The canal and others around Phnom Penh were built as part of the city’s development in the 20th century in order to drain the swamp land into surrounding lakes via a system of dikes and canals, according to CityLab. Some have been covered over to become underground sewers, while the others have festered.

Every day, Phnom Penh produces about 3,000 tons of trash, most of which is not recycled, according to a video released by the Environment Ministry earlier this month.

San Daravit, leader of the environmental group Trash Youth, which has attempted to clean up the similarly polluted Boeng Trabek canal, said he hoped to one day see Phnom Penh free of trash.

“People who live near the canal are badly affected by the smell of sewage — especially children. It causes them to have difficulty breathing because it affects their lungs,” Daravit said.

Some children he knew struggled with shortness of breath, he said.

The group did not have immediate plans to try again to bring about change for the city’s canals, but hoped to eventually turn Boeng Trabek into a visitor site, he said.

Over Khmer New Year in April, local authorities prevented the group from hosting an event at Boeng Trabek to raise awareness of the city’s waste problems, saying the area was too dirty and that the group planned to use a raft on the canal that did not belong to them.

City Hall spokesman Met Measpheakdey did not respond to questions.