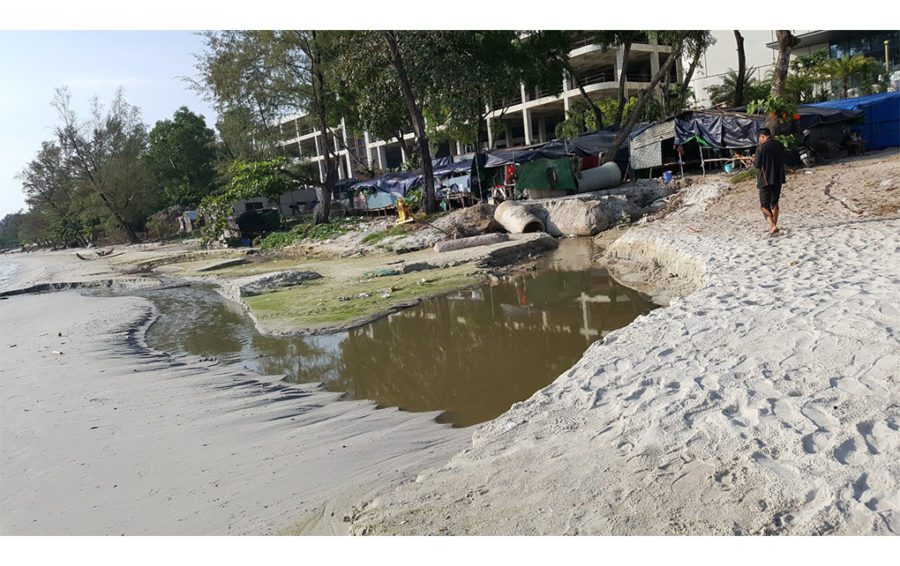 Dark discharges of sewage are being released into Sihanoukville’s Independence Beach, environmental activists say, contradicting a recent proclamation by Land Minister Chea Sophara that he had reined in polluting seaside businesses.

Environmental activist Meng Heng told VOD that a large pipe on the property of the Sunshine Bay Hotel was draining sewage including human excrement into the waters and that there were photos and video footage to prove the claims.

The Sunshine Bay Hotel, which includes a casino, is part of Sihanoukville’s recent boom of tourism development catering primarily to Chinese gamblers.

“This Cambodian beach will no longer be beautiful like it was said to be a few years ago, as being among the beautiful beaches of the world,” Heng said.

On Trip Advisor, where Independence Beach is ranked No. 4 among “things to do” in Sihanoukville, some reviewers have already decried the pollution.

“Rubbish everywhere, raw sewerage going straight into the sea, keep clear of the place, [n]ot worth a visit,” says one review that was posted two weeks ago.

Sunshine Bay Hotel Management director Huang Xiaohui denied that the hotel was discharging sewage directly into the ocean, which was long the main tourist draw of Sihanoukville before a boom in Chinese-oriented casinos started.

“We built a sewage treatment tank and it was the first one in Sihanoukville. It passed the government standards,” Huang said, urging authorities to investigate.

Provincial Governor Yun Min said that officials were looking into the case.

In a two-minute video posted on Thursday to the Facebook page of environmental group Mother Nature, sewage flowing out from near the property can be seen clearly polluting the waters with a distinct dark green-brown tinge.

Sophara, the land management minister and a deputy prime minister, posted on his Facebook page in late March that the beaches of Sihanoukville were no longer being polluted and that they had returned to their natural state.

Mother Nature co-founder Alejandro Gonzalez-Davidson said the issue of polluted waters around Sihanoukville had become a crisis affecting the environment, people, and the image of Cambodia to tourists and investors.

The land minister should work to strictly enforce the law, he said.

“Don’t lie to the people, tell the truth,” Gonzalez-Davidson said of declarations the problem had been solved. “Ask people to participate and they will join.”

“[He] should praise and give awards to activists and organizations that dare to investigate, dare to risk arrest and mistreatment in order to reveal the loopholes.”

Earlier this year, environmentalists revealed five sites where sewage was being drained into the sea, including O’Chheuteal Beach, O’Tres Beach, Koh Rong and Koh Rong Samloem. Officials took action at some of the locations, building treatment plants and ordering culpable businesses to halt their operations.