Sweden to Refocus Cambodia Aid Due to Rights Concerns 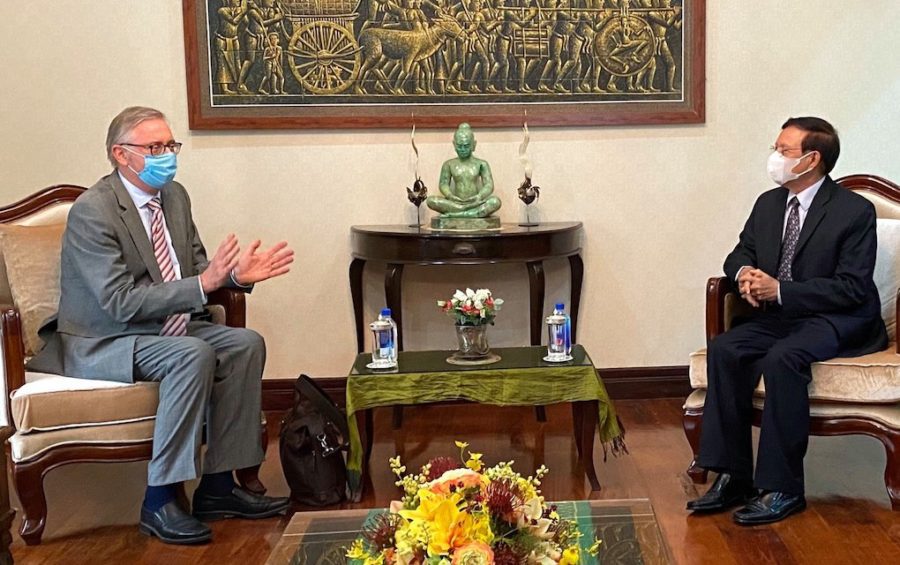 Sweden’s Ambassador to Cambodia Bjorn Haggmark (left) meets with Kem Sokha, leader of the dissolved main opposition CNRP, at Sokha’s home, in this photograph posted to Sokha’s Facebook page on May 19, 2020.

Sweden said it would phase out bilateral development funding to Cambodia by the middle of next year in order to focus aid on promoting human rights, democracy and rule of law in the country following severe rights restrictions in recent years.

In a press statement on Friday, the Swedish Embassy in Phnom Penh said its government decided on Thursday to shift its funding away from bilateral aid to the Cambodian government and toward programs that aim to develop democracy in the Asia Pacific region, which would also aid Cambodia.

The statement said Sweden would still support civil society, human rights defenders and democracy advocates in Cambodia, though it did not clarify which organizations may qualify for assistance.

Sweden said it was necessary to focus aid on “creating better conditions for a different, more democratic development” in Cambodia due to recent setbacks in the nation’s democratic space, respect for human rights and freedoms allowed to civil society and the media, according to the statement.

“The democractic space in Cambodia has been severely restricted in recent years,” Peter Eriksson, Sweden’s International Development Cooperation minister, said in the statement. “This has made it difficult to pursue broad and close cooperation. The government has therefore chosen to redirect our development efforts to offer better support for change with regard to human rights, democracy and the rule of law in the country.”

“This measure seems to be helping civil society, providing support to civil society, but some civil society groups will oppose and contest the government over the topics of human rights and democracy, which will lead to the failure of the Sweden government’s intended goal,” Malin said.

Both the Swedish Embassy in Phnom Penh and the Cambodian Foreign Affairs Ministry did not respond to questions from VOD about how current development funding would be impacted.

According to reports from the Phnom Penh Post, the Swedish government has already started or renewed aid funding to Cambodian government agencies in the first four months of this year, signing a partnership through 2023 with the Education Ministry in February and extending funding for the Cambodia Climate Change Alliance through 2022 in April.

Sweden said it would stop all new aid to Cambodia that was not used for education or research in November 2017 after Cambodia’s Supreme Court dissolved the country’s main opposition party, the CNRP.

Swedish parliamentarian Asa Eriksson, from the nation’s ruling Social Democratic Party, told VOD in January that Cambodia was “breaking the rules” of the “Everything But Arms” duty-free trade scheme with the E.U. by disrespecting human rights, which could not be tolerated.

On Friday, Naly Pilorge, director of human rights organization Licadho, said she was pleased to see the Swedish government would focus on human rights and rule of law in Cambodia, while maintaining support for civil society.

“We hope that the Cambodian government will take note of the need to address critical reforms to ensure the restoration of democracy, especially in the midst of the economic crisis affecting Cambodian citizens during the Covid-19 pandemic,” she said.