BANGKOK — Thai workers have pleaded for rescue from online scam businesses in Sihanoukville, where they were allegedly detained and tortured. Reports about forced labor and shocking work conditions have led Thai police to engage in more rescue operations and facilitate the return of hundreds of Thai nationals from Cambodia.

Note: The reporter interviewed the officials separately in two in-person interviews. Answers have been condensed and edited for clarity.

VOD: When did you start hearing about these scam cases in Cambodia? 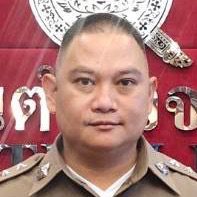 I’ve known about it since we started closing the border. The detainment of workers appeared in the beginning [of 2021]. In the past, when people went to work in Cambodia, mostly it was for normal office jobs. There were not a lot of these businesses, the scams and frauds.

Then, in early [2021], around January and February, I began to wonder why there were so many Chinese coming [into Thailand] illegally. We arrested a number of them. They came through Mae Sot, from the Myanmar border. I’m not sure how they made it from there. At first, I thought they were casino workers, but later I found out they came from China [to try to go to Cambodia], paying a commission fee to go there and building up their networks in Cambodia.

Lately, because of Covid-19, the land crossing has gotten a bit difficult because [Thai] officers are holding tight control along the border area. However, due to the economic situation, the [limited] opportunities have made Thai people who have these two skills — languages and online and computer — want to go to work [abroad] because the payments promised are relatively high, so they could provide for their families or sustain themselves.

When they learn from social media that there are job openings, they apply and travel to the border. Some might have been tricked from the very beginning, paying the fee and then not getting to meet any agents. Some make it all the way to the border with the promise they would get a passport or other document but eventually no one comes [to meet them]. Some pay everything and get to cross the border, but later find themselves crossing illegally, because now the land border still isn’t open for workers who are employed by unregistered businesses, so most of them have to cross the land border illegally.

VOD: What have returnees told you about conditions?

There are many of them who refuse to work and get sold off to other places. If they still refuse to work, they could be forced both physically and mentally. Physically, they might be forced to strip naked, sitting in an air-conditioned room where the temperature is turned down low. They could be ordered to run if they deny work, or cannot meet the targets, running around a field like a school student being punished. Sometimes, they are starved. In worse cases, sometimes they are beaten, flogged, causing bodily harm. They are forced to sit in front of a computer for hours. They are forced to find clients for the fraudulent platforms, maybe 50 or 100 people a day. If they can’t meet that target, they don’t get to eat dinner. During the day, they cannot go out. They don’t see any sunlight. So, many of them secretly try to use the phone to contact their families or officers for help.

When the workers get there, they are kept in the buildings and are not allowed to leave. There’s no freedom. They cannot not go out to relax. They can only stay in the room and the office. So, it becomes unbearable. When they want to quit, [the managers] would be like: “How can you go so early when I’ve already spent so much on you? If you want to go, you need to pay 20,000 baht.” It turned out that the workers would be willing to pay. Therefore, it opened up room for exploitation. They take in the workers and treat them very poorly, holding them captive, starving them, forcing them to work very hard, beating them, punishing them when they cannot work as expected. Upon hearing of this, the families of the workers would agree to pay. And it became this large network of smugglers bringing in 50 or 100 workers a time. Sometimes, they demand up to 100,000 baht [$3,100] for a commission fee.

The workers are also sold to other operations. The investors need Thai workers, as any of their business involving Thai customers, they would need Thai people to work for them. From what I heard, it’s not only Thai people. There are also Chinese, Laotian, Vietnamese, but they would be in separate offices.

Our rescue plan sometimes gets leaked and many of the workers are physically abused. The most recent was from Sihanoukville, where five girls asked us for help [in December]. The managers at the site were informed about them asking for help. The girls then were forced to sit in a circle and took turns slapping each other until they were bleeding from the ears, and they were tasered. Those who slapped their peers too lightly were tasered and kicked, beaten. It happened to so many of them.

VOD: What is the usual process for coordinating a repatriation with the Cambodian authorities, and how difficult is it?

First of all, crimes that are committed on the internet naturally make things difficult for the investigators to find and arrest the perpetrators. Cambodia is a whole other country. They might not have the information about what these people have been doing. It is the responsibility of the Thai side to investigate and request for an arrest warrant. That’s why we have asked the Cambodian authorities to help us look for them and arrest them, cracking down on these gangs. For whatever it takes, we must try to coordinate and collaborate as much as we can for the interests of Thai people, to wipe out all of these gangs.

We must have sympathy [for Cambodia] as well. We might not get as much as we want, but all things considered, our high-ranking officers have been able to travel there in order to coordinate responses, and we get some results. We have been able to make arrests. Internationally, there is also an issue of sovereignty, that we cannot order everyone to do everything that we’d like. Honestly, we must do everything the best that we can. Even if it’s only for one person, we have to do it. Regardless of the policy of Cambodia’s side, we have to negotiate for help. For anyone’s country, I think they don’t want any thieves to be in their country. So, we must plead with them to send those people to us. We have to keep working on this continuously.

VOD: What is the process of repatriation? And is there a possibility that the returned workers could be prosecuted in Thailand?

We have to consider it case by case, whether they really have been [forced] or actually are complicit but became unhappy then maybe just wanted to go home. When they arrive in Thailand … after the public health procedure is over, the officers question them and cross-check their records with the database, whether they have been associated with any criminals or have any warrant against them. If it’s from a request for help from Thai people, that is easy. But if it turns out that the group is a mixed bag including those who are complicit, we have to sort them out by interrogation. We have seen both of these during our repatriation efforts. So we have opened several cases. We also have to gather evidence, and we have to request cooperation from Cambodia to share information about the employers, the members of these networks, including other [physical evidence] seized from the crime scene.

As an officer, we must try to find the truth as much as possible. If we make any mistake, it is damaging for their families and also for themselves. They can turn from a victim to a perpetrator, and also from a perpetrator to a victim. It is something that we have to carefully keep in mind, because there are some workers who pretend to be a victim when they return as well. Like, they stayed there for six or seven months and were all happy. That’s not right. Although there might not be enough witnesses or evidence for prosecution, we still need to put them on a monitoring list, in case they sneak out again. They might face a heavier sentence if we arrest them for the second or third time.

VOD: Is Thailand pushing for foreign nationals who hire Thai people for such work to be extradited and prosecuted here as well? Is it difficult?

Yes, we have always requested that. Let’s say we will not stop working on this. This is all I can say. We won’t stop, because as long as there are still complaints in our country, we will do our best. And we will continue to find new ways, novel methods, to get our operations going, that is for sure.

VOD: How do you think this issue could be resolved?

Every department has to collaborate. There must be a policy directing all agencies to work together to find a way to prevent and crack down on it. For prevention, everyone needs to have a conversation together, including the NBTC [Thailand’s telecommunication regulator], banks and police, about promoting awareness. A monitoring system is needed, such as for blocking numbers that are found to be [connected to scammers]. The banks must help freeze [accounts] quickly, then the money wouldn’t be able to flow.

To suppress these crimes, we must arrest and question those who [are hired to] open bank accounts, every one of them, because if Thai people don’t open their door to the thieves, they wouldn’t be able to come in. The communication channels must be cut off, and the transaction channels must be blocked. Finally, we must raise awareness about how these scammers work. In order to crack down on them, we have to coordinate with another country, and the investigation must be able to lead to prosecution. All of these elements must go together. I have to admit that the work is quite tough, because each case involves a minor actor who does not know everything about these gangs at the core.

Most importantly, we need to request the Cambodian authorities that Thai people who go there illegally to work must all be arrested and repatriated. They shouldn’t be allowed to stay. Then, we wait for the border to reopen for them to be able to work lawfully. For these workers, whether they are forced or not, they cause a lot of impact for Thailand.