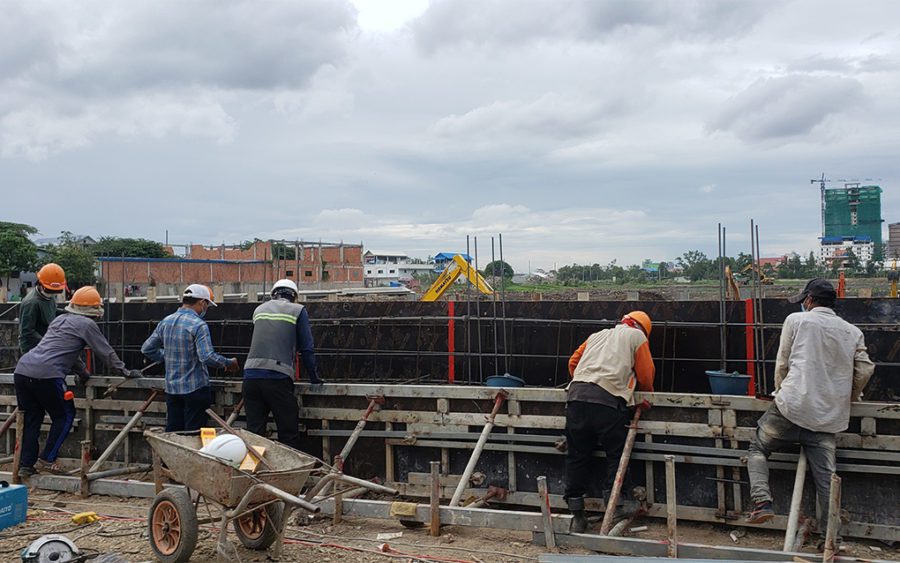 Construction workers bend over a steel construction at the site of the reservoir dig in Boeng Tompun I commune on July 21, 2021. (Danielle Keeton-Olsen/VOD)

Three journalists who were attempting a live broadcast from a land protest at Phnom Penh’s Boeng Tompun lake area were taken to a police station and made to sign an agreement that they would not make the same mistake again.

Leng Van Sothea, publisher of Cam-Hot News, said on Thursday that he did not want to make a big deal out of the incident as his team had made the mistake. A new member of a three-man team had started filming too early — when the protesters were still shouting and yelling, Van Sothea said.

He had told his team: “Only when I start shooting, you can start, since I understand about the work,” Sothea said. “They were new and didn’t know anything.”

The journalists were covering a small protest in early June related to a reservoir-building project on land claimed by more than 30 families. [Main story: Boeng Tompun Residents’ Land Dug Up for City Reservoir]

But authorities put the three from Cam-Hot News in a vehicle and took them to a commune police station, where they were questioned from 9 a.m. to 1 p.m., he said.

“They asked us to make an agreement not to let it happen like this again next time, as they said we were doing it without permission,” Van Sothea said. “It was not a big deal and we do not want to make it become a big deal, since our report had flaws. … We did not commit an illegal thing, but nobody’s perfect and the most important thing is we know what we have done.”

Boeng Tompun I commune police chief Chhoeun Chamroeun confirmed the detention and questioning, but said he had not been in charge.

“The district worked on it. The district was the one who did the questioning and handled it,” Chamroeun said. “I was small potatoes and it was the district police chief.”

Meanchey district police chief Meng Vimeandara could not be reached.