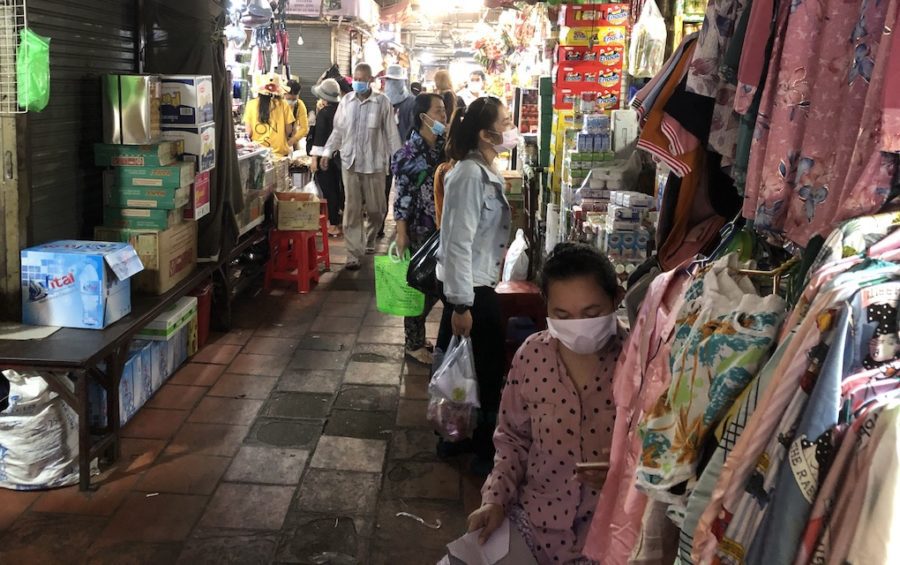 Two people have been charged and detained, and three others “educated” over social media commentary about the spread of Covid-19, which a National Police official claimed caused social chaos, scared the public and insulted government leaders.

National Police spokesman Chhay Kim Khoeun told VOD on Friday that two men, one in Phnom Penh and another in Siem Reap, were sent to court this week over Facebook posts and comments that authorities deemed illegal.

Three others, a man in Takeo province and two women from Siem Reap and Kampot provinces, were “educated” by police and signed contracts promising not to repeat their alleged mistakes before being released, Kim Khoeun said.

“Some insulted the government and frightened people. Some took the chance to use this issue [of Covid-19] to put the blame on and insult government leaders,” he said.

The police spokesman said authorities had to take action to guarantee public safety and social stability.

“Those who should be educated, we will have to educate. If they violated what was banned by articles of the law, then we have to enforce the law,” he added.

Phut Thona, a 32-year-old tuk-tuk driver in Siem Reap City, was arrested on Wednesday and jailed the following day on charges of false information, according to a provincial court order. If convicted, he faces one to two years in prison and a fine of 2 million to 4 million riel (about $500 to $1,000).

Koy Sam Ath, an online salesman, was arrested on Monday, according to a police report. Incitement carries a punishment of six months to two years in prison and a fine of about $250 to $1,000.

In a video clip posted on March 6 to the Facebook page “Tep Visal,” which the National Police said belonged to Koy Sam Ath, he thanked Vietnamese authorities for uncovering the case of a Japanese national who tested positive for Covid-19 after leaving Cambodia.

Koy Sam Ath appeared to be referring to a Japanese man who last week officials linked to Cambodia’s first national to test positive for the respiratory disease inside the country, after the two had direct contact in Siem Reap.

Vietnamese media reported last week that a Japanese national tested positive after landing at a Nagoya airport in Japan. He had traveled from Siem Reap International Airport on a Vietnam Airlines flight and transited through Ho Chi Minh City.

In the video, Koy Sam Ath, the accused Facebook user, expresses thanks to Vietnamese people, while using a term for Vietnamese that many consider a slur.

“It is lucky that yuon shouted that Cambodia has Covid-19,” he adds. “If the ordinary people shout, they might be arrested.”

In a speech last week, Prime Minister Hun Sen said he considered people who spread fake news about Covid-19 as “terrorists.” He has also said that people should fear the dissemination of false information more so than the virus itself.

The commission is also tasked with responding quickly to the public, and working with media outlets and the ministry, as well as social media companies to block websites, accounts or pages that disseminate false information that causes social chaos, the letter says.

Am Sam Ath, monitoring manager for human rights group Licadho, said officials should improve education about Covid-19 in order to decrease panic among the public rather than take swift legal action against them.

“The most necessary measure is education,” Am Sam Ath said. “A broad dissemination to make people understand would be the first option.”

Phos Sovann, the Information Ministry’s director-general of the information and broadcasting department, could not be reached for comment on Friday.

But at a forum about Covid-19 and fake news on Wednesday, Sovann said that in general the ministry adhered to the principle of education rather than taking harsh measures against those who posted on the internet.

However, he said whenever false information is on the rise, the government has to take action to prevent such a trend from continuing.