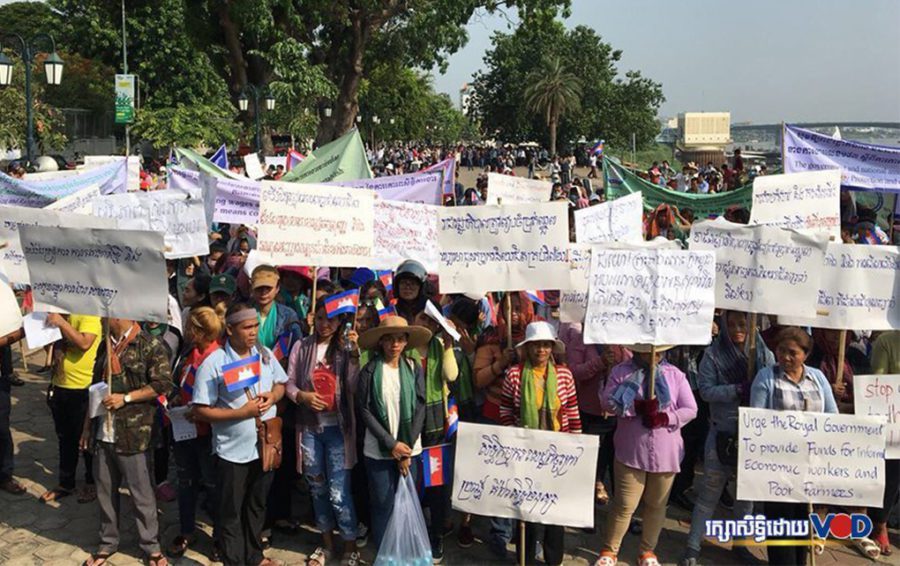 Thousands of workers are expected to gather across Phnom Penh for International Labor Day rallies on Wednesday, with independent workers union leaders vowing to defy a government ban on marching and restrictions on attendance numbers.

Cambodian Labor Confederation leader Ath Thorn said his gathering would start at Wat Phnom with a march planned for the 3 km south to the National Assembly to submit a petition, even though City Hall rejected his plans to march.

“We will still stick to our program and we will see how it actually goes and how far we are able to march,” Thorn said Friday. “Then we will stop marching.”

On Monday, he said he had concerns about the march being suppressed by city authorities but that his workers would still push ahead with their attempts.

“We are very worried because, in general, we have not been allowed to hold [marches] for four or five years already,” he said. “It is not always easy.”

Massive workers marches were once a commonplace event in Phnom Penh, peaking and eventually dovetailing with the rallies that followed the July 2013 national election that swept the capital as workers called for a higher minimum wage and opposition activists denounced alleged voter fraud at the ballot.

However, five people were shot dead and more than 40 injured by military police in January 2014 during protests in Phnom Penh’s Pur Senchey district. Local authorities have since been tightening restrictions on public gatherings.

“So what can we even do?” he asked

National Police spokesman Chhay Kimkhoeun said police would follow the law when it came to the question of officers protecting or preventing the march.

“I am responsible for law enforcement. If the law allows the march, I will protect it,” General Kimkhoeun said. “But if the law does not allow it, I will prevent it.”

Meanwhile, Cambodian Confederation of Unions president Rong Chhun said that City Hall had approved his plans to gather supporters at Freedom Park. However,  he said officials told him that he must limit participants to just 200 people.

Freedom Park, which was a focal point of the 2013 and 2014 political protests, was relocated away from the city center near Wat Phnom to the northern outskirts in 2017 after Prime Minister Hun Sen suggested it was causing “anarchy.”

“I have already informed at least 450 participants and I expect there will be more than that. It could be thousands,” Chhun said, rejecting the legitimacy of the limits. “I will still hold it as planned even if the authorities do not allow it.”

City Hall had forwarded his petition for more participants to the Interior Ministry, he said. Interior Ministry spokesman Men Bunrith said on Friday he had passed the petition on to his superiors and declined to comment further on the issue.

“I followed the administrative process by filing a request to the leaders of the ministry,” Bunrith said, requesting patience. “Just wait until the leaders make a decision, then follow it — it will only happen when the leaders decide.”

City Hall spokespeople could not be reached for comment. City Hall also denied requests for May Day marches last year. Union leaders complied at the time, but criticized the decision as violating rights to free expression and public gatherings.

In late November, Interior Minister Sar Kheng also directed local authorities to increase their cooperation with civil society. He said that properly registered organizations should be allowed to freely carry out public activities as they wish without seeking prior approval, as they had been allowed to long before.

(Translated and edited from the original article on VOD Khmer. Updated with additional information on April 29.)