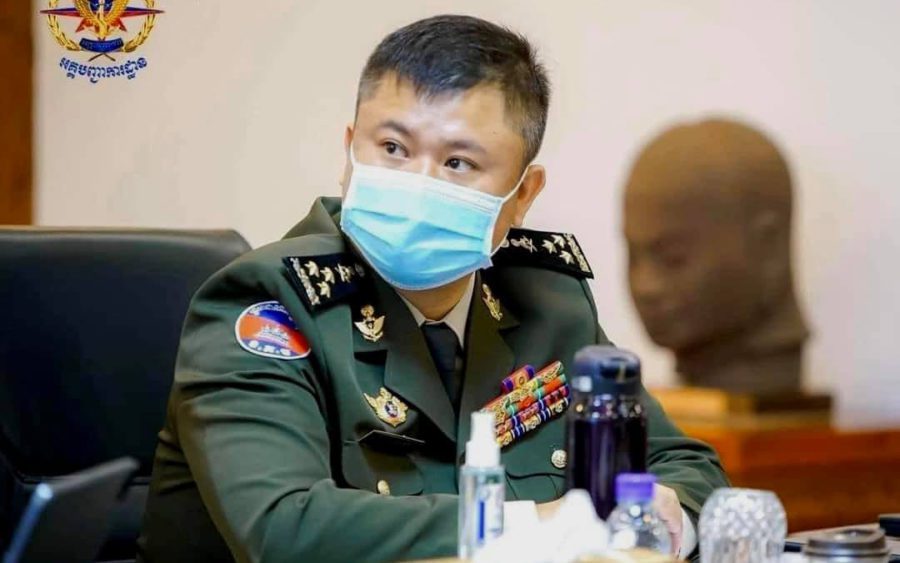 Hun Manith, the premier’s second son and leader of RCAF’s intelligence unit, wearing a uniform and mask in a photo posted May 21, 2021. (Facebook)

The United States imposed an arms embargo on Cambodia for alleged rights violations and increasing Chinese military influence in the country, specifically targeting a military intelligence unit run by the prime minister’s son.

The U.S. Commerce Department announced late Wednesday night that it was restricting the export, reexport and transfer of arms, equipment and other related materials for military use and intelligence gathering to Cambodia. Firms would need to apply for a license to export items on a restricted list, including for military use and military end users.

“We urge the Cambodian government to make meaningful progress in addressing corruption and human rights abuses, and to work to reduce the influence of the [People’s Republic of China] military in Cambodia, which threatens regional and global security,” said Commerce Secretary Gina Raimondo.

There has been a recent escalation in targeted sanctions by the U.S., with two Cambodian military officials sanctioned in November under the Global Magnitsky Act and U.S. businesses warned against potential exposure to the Cambodian military.

The U.S. said it was concerned with increased military presence in the country, especially at the Ream Naval base in Preah Sihanouk, which was on the agenda during U.S State Department official Wendy Sherman’s visit to Cambodia in June. Hun Sen agreed to allow a U.S. defense official to visit the controversial base but the U.S. later claimed they were given only limited access to the base.

Hun Sen last week said he was done with the Ream issue and instructed Defense Minister Tea Banh to reject any requests for visits to the base. Sherman had warned that any Chinese presence at Ream would negatively impact relations with the U.S., with Banh telling VOA that the Chinese were assisting in an overhaul of the base but would not remain there after renovations were completed.

Manith was made director general of the department in August 2017, according to government-friendly outlet Fresh News.

Sok Eysan, spokesperson for the CPP, brushed off the embargo because Cambodia had no need for weapons and would instead use its money to build infrastructure.

The U.S. Embassy in Phnom Penh said it had no comment beyond what was in the announcement.