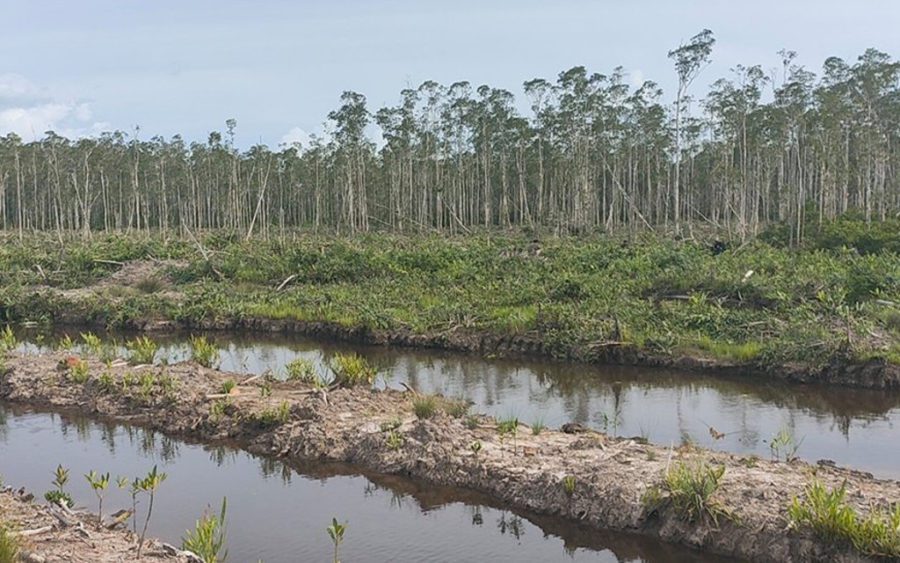 Cleared forest in Koh Kong province’s Dang Peng multi-use protected area, in a photo taken on July 4, 2021 and supplied by a local resident.

Koh Kong villagers claim that hundreds of hectares of forest in the province’s Dang Peng multiuse zone have been illegally destroyed and claimed amid a major land reclassification campaign in the province.

Sok Sambath, a resident of Pralien village in Botum Sakor district’s Kandorl commune, told VOD on Monday that about 500 hectares of forest in the protected area had been encroached upon and cleared since early this year.

Despite the large area, authorities have failed to take any action, Sambath said, adding that he was unclear who was behind the clearing.

“I do not know where they came from,” he said. “They cut it on a large scale, they hired workers to cut it, and the authorities and environmental officials who have offices nearby say they do not know who cut it.”

Kandorl commune chief Chheng Nge acknowledged that deforestation was taking place in the protected area but claimed the clearing extended only about 2 to 3 hectares.

After he and other local authorities examined the area, he said he would request the provincial government to grant a social land concession to people living in the area.

“Yesterday, I went to ban [the loggers], saying that this land is in the salt water block and the land is reserved land for people and also is land in the protected area,” he said. “Brothers and sisters, do not go to the clearing again. If we do that, it is not appropriate. Yesterday, they came again with a group of 50 to 60 people to cut.”

The claims of land clearing come after the Council of Ministers declassified nearly 127,000 hectares of Koh Kong province protected areas for distribution to people. The Dang Peng multiuse zone, a coastal area within Botum Sakor district that houses the Heng Huy economic land concession within its borders, will lose 19,651.29 hectares through the sub-decree.

Sin Buntha, an environmental official in the Dang Peng area, said that there had been cases of deforestation and encroachment on forest land next to the Dang Peng protected area. However, he wasn’t sure if this latest clearing was within the protected area, saying he was waiting for authorities to measure it.

The official said that after the measurement, if it is found that there is logging in the protected area, the provincial environment department will build a case to send to court.

Another resident of Pralien village, who declined to be named, alleged that most of the people who committed forest crimes in the area were rich and powerful, while the poor were few and powerless.

He suspected that the issue could be linked to corruption and collusion between local authorities whoever is cutting the land.

“About 300 to 500 hectares of forest were cut down, the land is very large,” the resident said. “They go and cut from inside to outside. The rich and powerful people have been cutting a lot, and the environment [officials] are stationed about 100 meters away but [forest] can still be cut. We do not know how they cut it.”