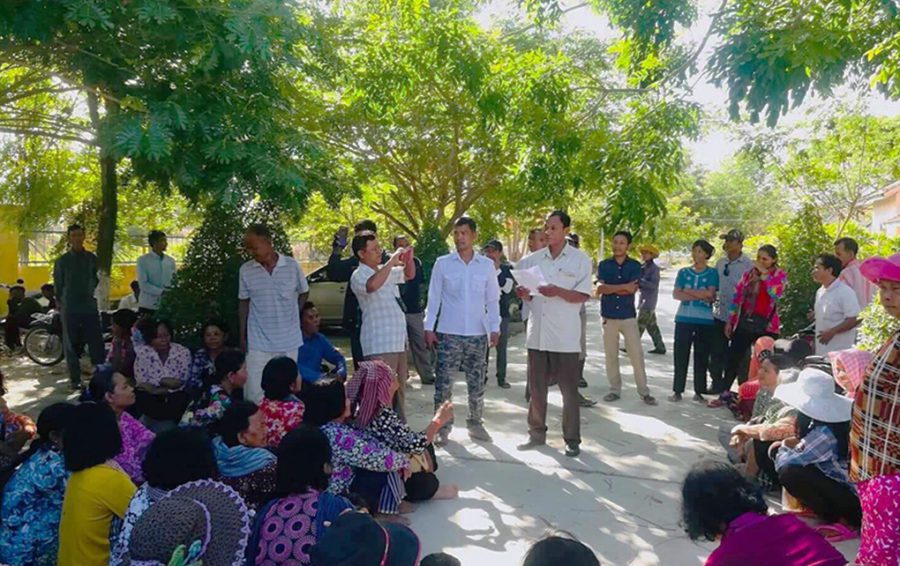 About 400 villagers protested outside the district hall in Kandal province’s Kandal Stung district on Monday seeking compensation for communal land they say was sold without their knowledge to house Phnom Penh’s new airport. (Photo/FB)

About 400 villagers protested outside the district hall in Kandal province’s Kandal Stung district on Monday seeking compensation for communal land they say was sold without their knowledge to house Phnom Penh’s new airport.

Phok Phanny, a representative of the protesting villagers, told VOD that 83 hectares of land in the Ampov Prey commune belonged to a local “solidarity group” — a communal farming structure left over from the socialist 1980s.

“That land belonged to a solidarity group, for whom the old commune chief had set aside one part for [farming], one part as communal forest land, and another part as a communal lake,” Phanny said. “If the land is sold, it needs to benefit the whole group. But this group of people has not been compensated.”

Late last year, more than 2,000 families reportedly accepted $100 each in compensation for losing 400 hectares of the community lake. But others in the community refused the offer, saying it was too little for such valuable land.

Yem Yat, another protesting villager, explained that authorities had demarcated the land for communal use in 1984 and it was not Heng Corporation’s to sell.

“We are protesting at the district hall and want the district authorities to intervene with the company to find a solution for the people,” Yat said.

“The land belonged to the people, and did not belong to a businessperson.”

Kandal Stung governor Bou Nareth said the ongoing issue was difficult to resolve because so many different people had laid claims to the land.

“That land all belongs to the companies, which bought [the land] from the people in the community — but if you think that this place or that place has not been bought, I will look into their documents,” Nareth said.

The announcement of the airport project led to a spate of land disputes and property speculation in the area, with several groups saying that companies had claimed ownership of villagers’ land in order to sell it to Cambodia Airport Investment, a joint venture between OCIC and the civil aviation authority.

The investment fund belongs 90 percent to OCIC and 10 percent to the State Secretariat of Civil Aviation, with funds made up of $1.1 billion in foreign investment, $280 million in loans from OCIC, and $120 million in registration capital.