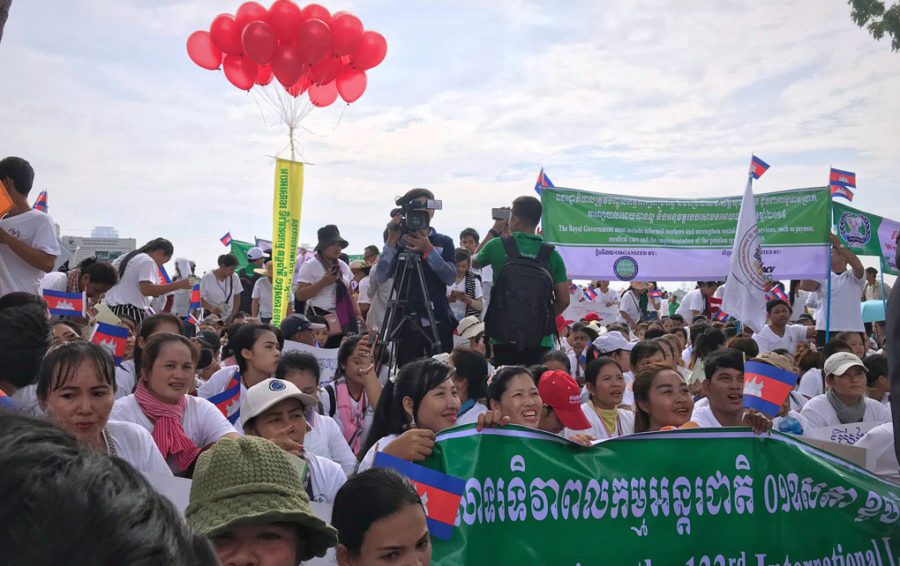 Workers gather at Phnom Penh’s riverside for an International Labor Day rally on May 1, 2019. (VOD/Alex Willemyns)

Cambodian Labor Confederation leader Ath Thorn led about 1,000 workers in a truncated march in Phnom Penh on Wednesday morning to mark Labor Day and push for the further respect of labor rights in Cambodia after police warned they would “take action” if the group tried a larger procession across the city.

Thorn joined with workers and other union leaders — as well as Transparency International Cambodia’s executive director, Preap Kol — in a 30-minute march around the riverside Council for the Development of Cambodia (CDC), the government body responsible for approving foreign investments proposed in the country.

In a speech, Thorn raised disrespect for human and labor rights in Cambodia as his union’s major ongoing concerns and called for the government to change its attitude toward criticism over the issues. He also called for more raises to the minimum wage for garment workers and for doctors not to discriminate against workers who use low-income cards meant to allow access free health care.

The brief march brought the workers from the CDC’s riverside visage to the front of Wat Phnom and then back. A few police officers were stationed around the exits from the area and quickly but nonchalantly re-arranged metal barriers preventing any potential extensions of the march as the workers made their lap around the block.

Phnom Penh Municipal Police Chief Sar Thet had said on Tuesday that authorities would not allow the labor confederation’s proposed Labor Day march from the area around Wat Phnom to the National Assembly to deliver a petition calling on Prime Minister Hun Sen’s government to pay better respect to labor rights.