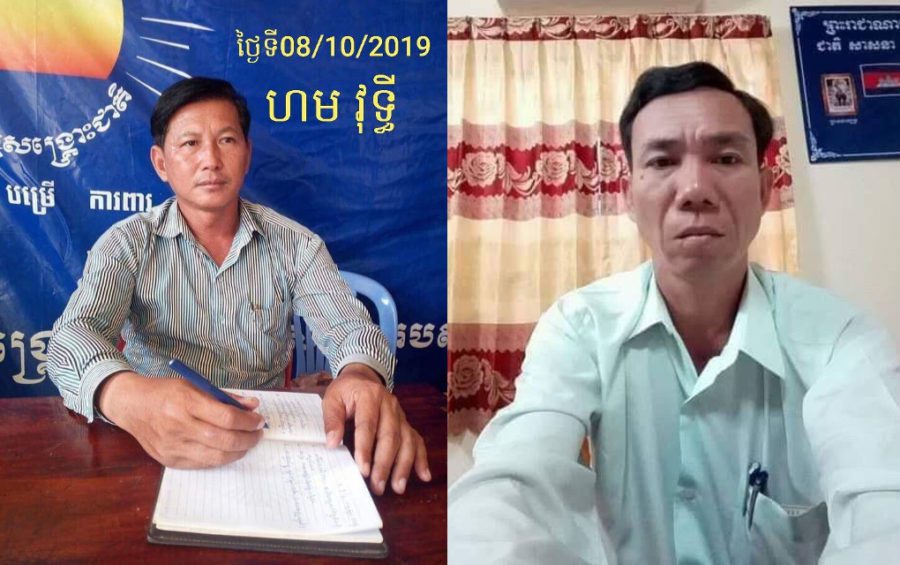 At least 12 more supporters of the outlawed opposition CNRP have been charged since Saturday with “plotting” an attack over their support for exiled party leaders’ promised return to the country next month, with four of them arrested this week.

The government has branded support for the planned return of Sam Rainsy and other senior CNRP leaders on November 9 as akin to attempting to overthrow the government and vowed to arrest those participating in organizing supporters or expressing their support.

The main opposition CNRP was dissolved by the Supreme Court in November 2017 following the arrest of party president Kem Sokha on widely criticized treason charges, which he denies.

Sokha remains under de facto house arrest, while Rainsy, the other co-founder of the party, has lived abroad since 2015 to avoid a slew of court convictions against him, which he calls politically motivated.

On Tuesday, police arrested Ham Vuthy, a former Batheay district council member for the CNRP in Kampong Cham province, at about 10 a.m., according to CNRP youth activist Rin Roath. Vuthy was charged with plotting, adding to the more than 30 CNRP supporters arrested this year, about half of whom were detained after Rainsy announced in August that he would return to Cambodia. Another former CNRP member from the same district was also arrested last week.

Prime Minister Hun Sen on Monday ordered the deployment of armed forces and authorized the use of “all kinds of weapons” ahead of Rainsy’s promised return.

More than 150 activists and members of the banned CNRP have been summoned for questioning by police or the courts this year and two CNRP supporters — an ex-commune chief and a former bodyguard for Rainsy — were assaulted by unidentified men wearing motorbike helmets in daylight drive-by attacks in Phnom Penh.

The Phnom Penh Municipal Court on Monday charged Kruy Sokhemrith, Seng Sokhorn, Tith Sophat, Voeung Samnang, Khin Sokheang as well as their associates, who were not identified by the court, with plotting an attack, according to a court statement.

The five were charged for their activities in gathering and inciting the public to participate in a plan to overthrow the government under the pretext of the “plan of criminal Sam Rainsy’s return to Cambodia,” the court statement said.

The accused had gathered and provoked people, and had a plan to lead their group to Phnom Penh to participate in activities to overthrow the government on November 9, it added.

Plotting an attack carries a maximum sentence of 10 years in prison.

The Oddar Meanchey Provincial Court on Monday also charged Oun Srean, 48; Mak Vannvuthy, 47; and their unnamed associates with plotting, according to a statement.

The court said the two had been charged over their activities of gathering Cambodian migrant workers in Thailand to participate in the alleged “coup” attempt under the pretext of “the return of criminal Sam Rainsy.” They were also accused of planning to lead their group to Phnom Penh on November 9.

On Saturday, the Tbong Khmum Provincial Court issued arrest warrants for Sim Seangleng, Yem Vanneth and Mean La, also on charges of plotting an attack and attempting a coup under the pretext of Rainsy’s pledged return.

La, 31, was arrested by police near the Thai-Cambodian border in Poipet City and accused of “plotting a coup and incitement to cause serious unrest,” according to a list of arrested and detained CNRP activists provided by Sochua.

La was a member of the CNRP’s Ponhea Krek district executive committee in Tbong Khmum.

“Let us go back to our country. We are Khmer children. We have a duty to help our home country,” he wrote on Facebook, according to the court statement.

Sochua, the CNRP vice president, has said that the party leaders who have vowed to return to the country would be unarmed and their actions would be nonviolent.

However, the party has said it raised money among Cambodians abroad to offer funds to any soldiers who defect from the military upon the opposition leaders’ return.

Rainsy has said the public needs to rise up in a “people-powered” movement to force the resignation of Hun Sen, who has led the country for 34 years.