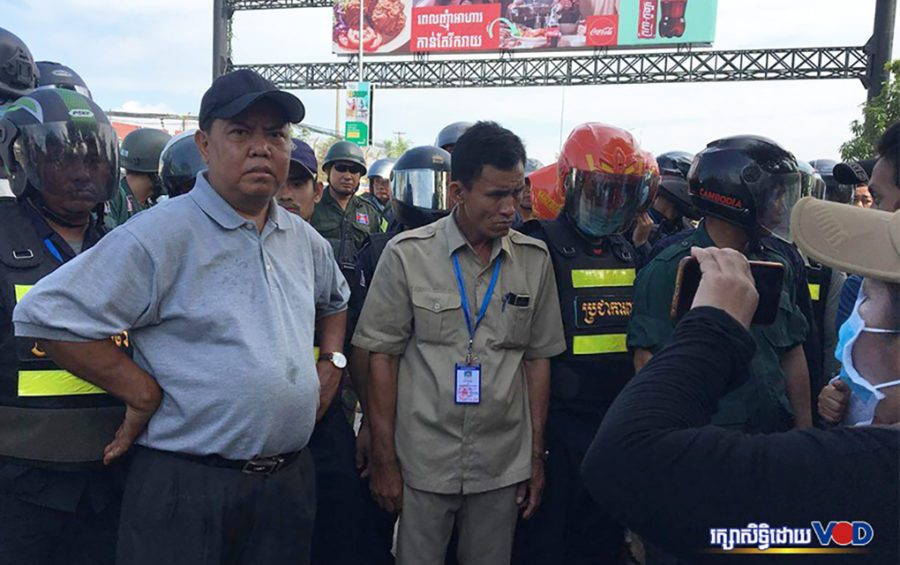 District authorities blocked citizens from protesting at Freedom Park for the release of Rong Chhun and other activists arrested for protesting about border issues on September 7, 2020. (Khan Leakena/VOD)

Three activists — including a monk — were arrested over two days at a series of small protests ongoing in Phnom Penh, with the Interior Ministry ordering action against two groups “causing chaos in society.”

In a statement released on Monday, the Interior Ministry accused Khmer Thavrak and Mother Nature of inciting instability and disrupting security and public order.

They were “causing chaos in society using social media and some news media to broadcast articles, leaflets, photos and videos as well as holding demonstrations without legal permission,” the statement said. The groups were not registered as an association or NGO with the ministry, it added.

“The Interior Ministry would like to appeal to people to please not participate in the illegal activities of these groups,” it said, ordering relevant authorities to “take action in accordance with the law to guarantee public order and national security.”

They must prevent “all causes of anarchy and chaos in society as all Cambodian people celebrate Pchum Ben,” it said.

Khmer Thavrak has been engaged in a series of protests since last month, sparked by the arrest of unionist Rong Chhun in late July over comments he made alleging that Cambodia was losing land to Vietnam. In August, Khmer Thavrak attempted to march under the banner of “I Love the Nation,” a celebration of “patriotic heroes” arrested for protecting the country’s borders.

Six of its members were arrested last month after protests held in support of Chhun, and two of them, Chhoeun Daravy and Hun Vannak, have been charged with incitement and are still in jail.

A third member, Tha Lavy, was arrested on Monday.

Kim Khoeun said they had staged protests without permission and in violation of Covid-19 public health measures, but the reason for the arrests was that they had endangered national security.

“If it did not affect social security, [authorities] would not have made the arrests,” Kim Khoeun said.

“Their arrests are not related to their demonstration — don’t confuse it. It’s different,” he said, but declined to say what the national security concerns were.

Prummony and Saray — members of another group, the Khmer Student Intelligent League Association — were arrested on Sunday, while Lavy was arrested Monday, he said.

About 50 protesters gathered near Freedom Park in Russei Keo district on Monday around 8:30 a.m. They faced barricades and a force of about 100 officers from police, military police and security guards hired by local authorities.

After verbal exchanges and being pushed away from entering the park, the protesters walked to the U.S. Embassy to submit a petition before returning. Failing again to enter Freedom Park, the small protest disbanded around 1:30 p.m.

So Metta, a Khmer Thavrak activist who participated in the demonstration, said the authorities’ actions violated their rights.

“Where is our freedom? This is a public place for people,” Metta said.

Muong Sopheak, a young protester, said the goal was to lead nonviolent demonstrations demanding social justice, and the participants had no intention to incite opposition against the state’s authority.

“I came to express myself peacefully,” Sopheak said.

In a statement on Saturday, Khmer Thavrak said it would protest every day until September 15. “The demonstrations we lead are an exercise of the freedoms stated in the Constitution of Cambodia, which is the nation’s top law,” it said.

Cambodian Center for Human Rights director Chak Sopheap, said the space for freedom was dwindling. Politicians, journalists, human rights defenders, unionists and ordinary people were finding it hard to fulfill their work without fear, she said.

“When people are afraid, there will be less accountability, and Cambodian governance will have no checks and balances,” Sopheap said.

The government should listen to people’s concerns and give them the opportunity to express themselves, she said.

One of the two activists arrested on Sunday, Saray, was a monk and therefore defrocked at Wat Botum ahead of his arrest, said Khim Sorn, Phnom Penh’s chief monk.

“When asked, he said holding demonstrations was his principle, and he has to do it, so we need to let him leave the monkhood to become an ordinary person,” he said.

Meanwhile, three activists from Mother Nature, an environment group, were arrested on Thursday amid plans to raise awareness around the conservation of Boeng Tamok, one of the capital’s “last lakes.”