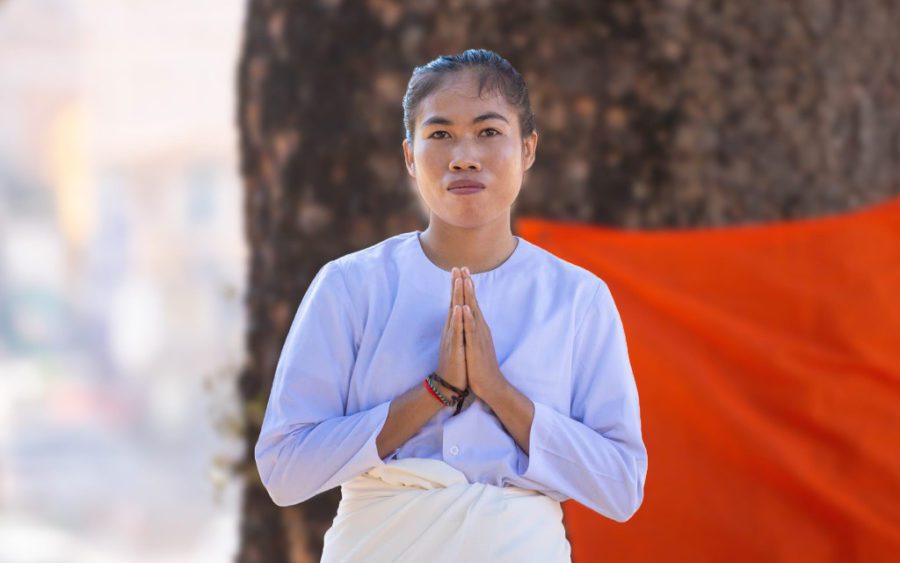 Members of the environmental group Mother Nature spent Thursday trying to trace the whereabouts of three of its prominent activists, who were arrested by Phnom Penh police in the middle of producing the group’s latest campaign video.

Phnom Penh Municipal Police spokesperson San Sokseyha confirmed Thursday afternoon that Thun Ratha, Long Kunthea and Phuong Keorasmey had been arrested and detained for questioning. Ratha faced questions over broadcasting without permission from his house, while Kunthea and Keorasmey were arrested for posting news about Boeng Tamok lake, the spokesperson said.

“Our Chbar Ampov police questioned them related to the post that can be seen on the Mother Nature Cambodia page,” he said. “They posted news about the filling up of the lake and so on and they broadcasted and planned to meet leaders at home.”

On Tuesday, Mother Nature’s Facebook page posted that Kunthea planned to march by herself from Wat Phnom to Hun Sen’s house next to Independence Monument from 11 a.m. on Thursday. She wanted to express to the premier her concerns over filling and construction in Tamok lake, one of the last substantial wetlands in Phnom Penh.

Mother Nature founder Alejandro Gonzalez-Davidson, who was deported in 2015 and has been consistently denied re-entry to Cambodia, told VOD he was coordinating with the activists from his home in Barcelona.

He said the group was still trying to piece together details of Kunthea and Keorasmey’s arrest.

The three activists had planned to keep the demonstration to one person in order to avoid causing disruptions to traffic and drawing crowds, either of which might have been considered a disturbance of public order, Gonzalez-Davidson said.

Kunthea, dressed in white, was to walk the route to Hun Sen’s central Phnom Penh estate on her own, with Keorasmey streaming from her phone for the group’s live social media show. Ratha would be broadcasting from a simple studio set up in his home, Gonzalez-Davidson said.

But by the end of the day, all three were in police custody.

Gonzalez-Davidson said he did not know how Kunthea and Keorasmey were arrested, but he had found out that the two women were being held for questioning at the Chbar Ampov district police station.

“You’re sending 20-year-old girls to jail for wanting to meet the prime minister — they’re not even protesting,” he said.

Ratha was arrested at his home in Pur Senchey district’s Choam Chao I commune, he said. Though he was unsure whether officials confiscated any equipment from Ratha, officials left a handwritten, thumb-printed note on the door, saying that the house was closed by authorities for broadcasting news without permission.

Information Ministry spokesperson Meas Sophorn said the ministry had received information about the three arrests, but he declined to give any details, saying authorities were processing the case.

“The ministry has no additional comment on this work since the case is in the procedure of the authorities, and the ministry will continue to follow this case,” he said.

Authorities have taken strict measures against youth protesters in recent months, most recently arresting four activists who were prominent in demonstrations calling for the release of unionist Rong Chhun. Authorities have also thwarted a bicycle tour and a photo exhibition to raise awareness about the conservation of Koh Kong Krao island, as well as memorials and marches for murdered political analyst Kem Ley.

There were not many people left who were willing to voice their criticisms of the government, Gonzalez-Davidson said, but he felt that the arrests were stirring anger among the general public.

“The status quo is changing,” Gonzalez-Davidson said. “Cambodia is becoming more and more of a Stalinist [government], very similar to Laos and approaching North Korea territory in terms of jailing people for posting on Facebook. But that doesn’t mean we will stop talking about it.”

Pat Rasmey, the wife of Ratha, said she believed her spouse’s arrest was due to his social work, and she would make her voice heard too.

“He dares to speak straightforwardly on the current social issues,” she said. “If they do not release my husband, I will protest the next day.”