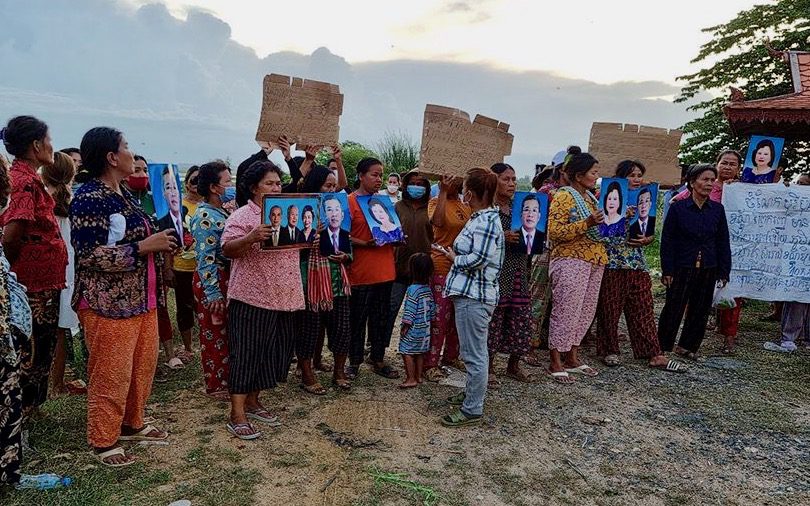 A supplied photo of Prek Pnov residents protesting the potential loss of their homes because of the filling in of Boeng Tamok.

About 100 families living on the edge of Phnom Penh’s increasingly land-filled Boeng Tamok lake protested outside the Prek Pnov district hall demanding land titles and criticizing the transfer of lake plots to tycoons and the family of government officials.

The major lake, in the north of the city, is rapidly being filled with sand for housing and other developments after being privatized and divvied up among well-connected individuals and state institutions.

In its northeast corner, residents live in lakeside shacks where they fish and grow vegetables on the water. They have been labeled as illegal inhabitants by authorities, and on Tuesday gathered outside the Prek Pnov district hall in protest.

Prak Sophea said residents had clashed with district security guards earlier this week over the expanding landfilling, which had brought bulldozers right up to their residences.

“Now the authorities are filling up the water that is close to the back of our houses. An official from the district office said the lake needed to be filled up, and the land and houses of people on the edge will not have a solution, they will fill it all up,” Sophea said. “So the people erupted in protest. The people asked them to wait until they finished their harvest.”

Sophea alleged that district security guards had drawn their guns and ordered the bulldozers to “fill earth on the people.”

“It is very brutal, more than [Pol] Pot,” Sophea said.

Another villager, Phorn Sokhom, said the government had ceded thousands of hectares of Tamok lake to government officials, tycoons and powerful people, as the poor, who live on little land, received no right to even stay.

Sokhom alleged that before the June 5 election, local officials had promised to find solutions for them, but now were threatening to take people to court.

She said the government should pay attention and avoid another Boeng Kak or Borei Keila — two famous and violent episodes of forced evictions in Phnom Penh.

“The state does not allow the people there, but only gives to tycoons. When it’s election time, do the tycoons alone elect you?” Sokhom said. “In the past, when the land price in my area was not yet high, they came to us to campaign day and night, but now they smear us that we live illegally on state land.”

Prek Pnov district governor Sok Sambath said the shacks on the side of Road 130 were illegal. Officials had offered them land elsewhere in the village, but residents had refused, Sambath said. Resettlement had been delayed, but the offers for land swaps were still on the table, he said.

“If you would move to the [other] land, our authorities are always ready to prepare it for them. The land is already prepared by Phnom Penh City Hall. You can see it for yourselves and advise the people to go there and get legal land for their children,” Sambath said.