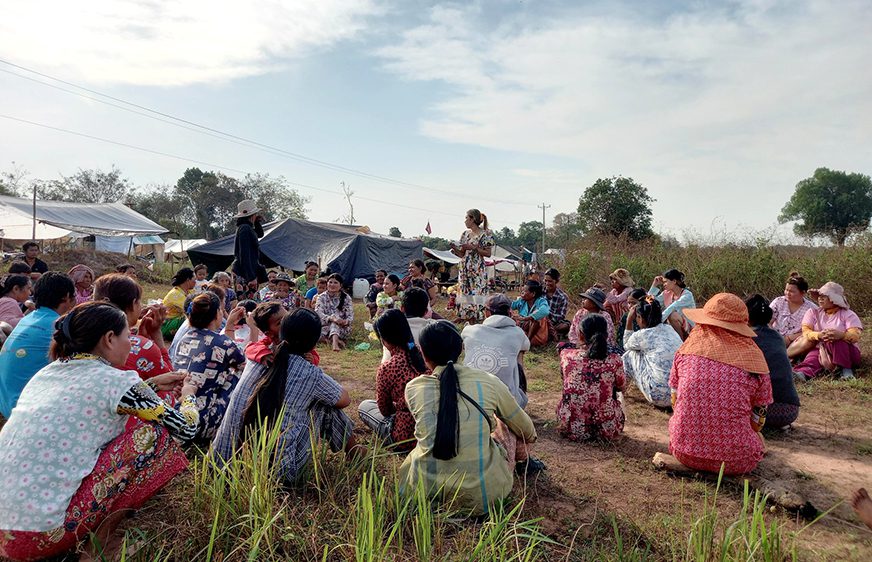 Villagers at the Botum Sakor district land they say was taken from them without compensation about a decade ago by sugarcane plantations run by CPP Senator Ly Yong Phat. (Provided)

Koh Kong authorities have threatened to tear down shelters built by residents of Botum Sakor district on land the locals say was taken from them by sugarcane plantations run by CPP Senator Ly Yong Phat.

Local authorities in Kandol commune said about 100 villagers had built small shelters on state land in January. In a statement released February 9, the authorities threatened to demolish the structures soon.

Residents said the land was used by them before Ly Yong Phat’s Koh Kong Sugar and Koh Kong Plantations were granted the land in 2006 to grow sugarcane. The group said they were given no land or monetary compensation after being evicted.

Pheng Teng, a representative of the group who is being sued in court in relation to the land dispute, said they will not leave the land nor will they dismantle the shelters built on the land.

“The people are determined that they will not leave the land because they really have lost their land,” she said. “They are upset that the authorities took their land and gave it to the company without compensating them and are accusing them of already receiving compensation.”

She added residents were worried authorities could arrest them.

Touch Ngann said his family had three hectares of land that was taken by the companies in 2006, and that his family was threatened to not resist the clearings more than a decade ago.

“And at that time, we were too poor and dared not to protest,” he said.

“Now, we are protesting to get our land back. If it is not resolved properly for us, we will not move from this land. We will face the authorities.”

There are numerous land disputes in Koh Kong and Kampong Speu provinces relating to forced evictions and clearing of communities’ land to make way for sugarcane plantations. In Preah Vihear, residents of Tbeng Meanchey district are similarly taking back land given to five Chinese-owned sugarcane companies, commonly referred to as Rui Feng, and are facing off with local officials who are instead trying to lease the land for rice cultivation.