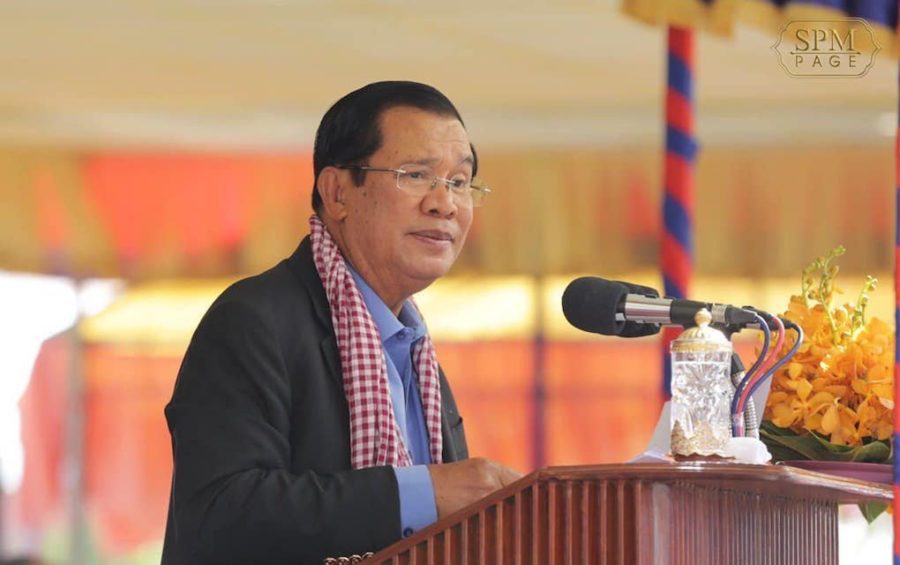 Prime Minister Hun Sen gives a speech on March 9, 2020, in this photograph posted to his Facebook page.

Prime Minister Hun Sen on Monday said China was transporting raw textile materials to Cambodia to relieve some garment factories of shortages caused by the Covid-19 outbreak, which a union leader called a welcome but short-term fix.

Five ships transporting raw materials were set to dock at the Preah Sihanouk Autonomous Port and another two ships in Ho Chi Minh City, with the first deliveries arriving in Cambodia on Monday, Hun Sen said during a speech in Pursat province, though he did not specify the amount of textiles to be imported.

“I would like to share the happy news to Cambodian workers that our Chinese friends have organized seven ships to transport raw materials to support our factories,” the premier said.

Textile shipments from China would continue for up to five months, though it was unclear how much the nation would be able to provide, he said.

Last week, the Labor Ministry said 33 factories had asked to suspend operations for two weeks to a month due to a lack of materials, with more than 70,000 workers facing suspended contracts.

Ath Thorn, president of the Cambodian Labor Confederation, welcomed China’s decision to send materials to Cambodia, but said he was concerned this was a short-term remedy that could not replace the one or two materials shipments that Cambodia received a day before the outbreak.

“With this amount, we are not clear about how many containers? How many tons?” he said. “I think it is not much.”

China’s overall exports plunged 17.2 percent in the first two months of the year, and the nation sunk into a trade deficit of $7.1 billion, the Financial Times reported Saturday. Cambodia imported $1.3 billion of knitted or crocheted fabric and $365 million of cotton from China in 2016, according to U.N. Comtrade data.

Moeun Tola, executive director of labor rights group Central, told VOD last week that the government should push the agriculture and manufacturing sectors to produce more fabric for the garment industry in order to diminish the impact of future global shortages.

Hun Sen also said he would order other national institutions to evaluate how they can reduce strain on garment workers whose contracts are suspended as factories reduce production. He asked state-run utility Electricite du Cambodge and municipal water supply authorities to consider delaying electricity and water fees for workers living in rented rooms.

Additionally, he asked banks and microfinance institutions to exempt workers on suspended contracts from paying interest on loans, ordering the National Bank of Cambodia and the Finance Ministry to hold a meeting on the proposed measure.

“They have been suspended from work, and we require them to pay. Instead [we should] delay repayments or not charge interest,” Hun Sen said.

The Association of Banks in Cambodia and Cambodia Microfinance Association, which represent the nation’s lending institutions, expressed support for earlier recommendations from the National Bank, including exercising “flexibility in dealing with issues about loan repayment of customers” impacted by Covid-19, according to a statement dated Monday.

The latest initiatives follow the premier’s proposal to support major industries last month, including tax holidays and wage support for the garment and tourism sectors, which are projected to be greatly impacted by the viral outbreak.

Hun Sen said again on Monday that if factories suspended operations, employers would need to pay 40 percent of workers’ minimum wages, while the government would pay 20 percent. Last month, he also said factories that halted production would not need to pay into the National Social Security Fund.

The Labor Law says that employers can suspend contracts for up to two months when facing a “serious economic or material difficulty.”

Leang Theary, a quality control employee at 7NG garment factory in Kandal province, said the factory suspended her job for two months last week, and she had little hope that she would be called back to work anytime soon.

Theary said she had received two payments of about $76, or 40 percent of her monthly wages, for the two-month suspension period.

Labor Ministry spokesman Heng Sour and Garment Manufacturers Association in Cambodia’s deputy secretary-general Kaing Monika could not be reached for comment on Monday.

On Saturday, the Health Ministry confirmed Cambodia’s first national to test positive for Covid-19, a 38-year-old man in Siem Reap who had close contact with a Japanese man who tested positive after departing the country last week.

The government has ordered all Siem Reap City schools closed and cancelled the Angkor Sangkran festival in the city, scheduled for Khmer New Year next month.

However, two other events this month will continue as usual.

Tourism Ministry spokesman Top Sopheak said on Sunday that the River Festival in Battambang province would still be held beginning on Friday, with more than 1 million people estimated to attend. Hun Sen added on Monday that he would join the weekend’s festivities.