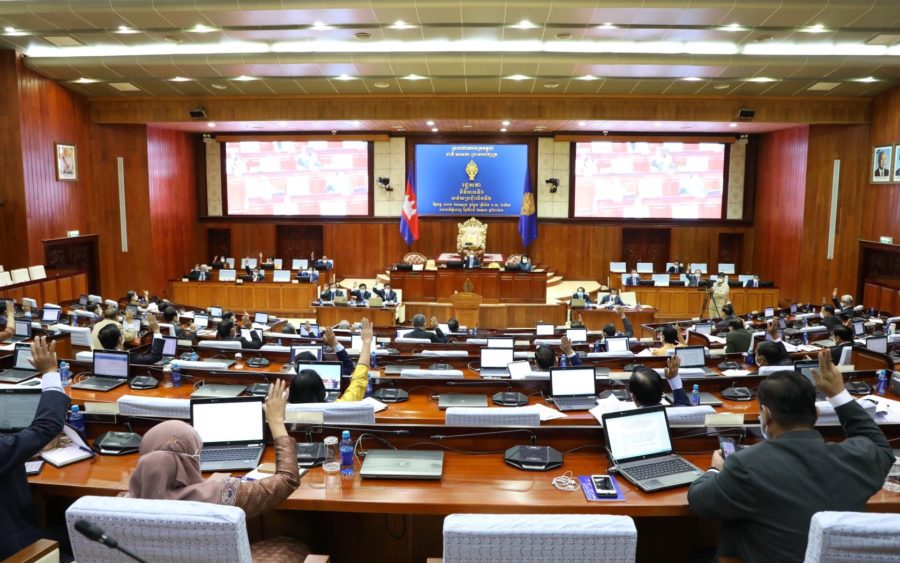 National Assembly members cast their vote at a session held on October 25, 2011, in a photo posted to the assembly’s Facebook page.

The Khmer Rouge Tribunal will enter a sunsetting period before it is finally shut down under a draft law that has now passed the National Assembly.

The tribunal, also known as the Extraordinary Chambers in the Courts of Cambodia, has tried top officials in the Khmer Rouge regime of the 1970s, finding three individuals guilty for crimes against humanity, including two of them for genocide.

The tribunal has opened several cases since it began operations in 2007, though it was mired in controversy over alleged government interference in stopping the prosecution of lower-ranking officials.

Assembly spokesperson Leng Peng Long said on Wednesday that the National Assembly had passed legislation that had been agreed upon between the government and the U.N., which was involved in the tribunal’s original establishment.

“We’ve already passed it,” Peng Long said. “It’s no big deal because, in short, the trial of the big cases have already been finished, and there is only a transitional period to finish the work. … There remains very little work.”

Peng Long did not provide a copy of the bill, but said the transitional period could be “two or three years” to prepare a library for future scholars.

“After this, the court will be dissolved,” he said. “The big cases have finished so it is time for us to end this.”

He added that there was no need to prosecute further cases.

“We established the court to try the top people responsible. Those who implemented at a lower level do not bear responsibility because they followed orders and sometimes were forced and intimidated,” he said.

Two of his own children, as well as his brother, father, nephew and brother-in-law, had died under the Khmer Rouge regime, he added. It would be too difficult to compensate all victims, he said.

“Where could we get the civil compensation? This is very difficult,” he said. Cambodia had not forgotten the atrocities, and would prevent them from happening again, he said.

“Our people became victims, and it was our internal issue of Khmer killing Khmer. And this is our painful Khmer story,” he said.

Once the Senate passes the law and it is signed by the king, the tribunal’s transitional period will begin.

Youk Chhang, director of the Documentation Center of Cambodia, said justice came in many forms, and the end of the tribunal did not mean the justice process would come to an end.

“The court has given the basics to teach the next generation about Democratic Kampuchea,” Chhang said.

It was not necessary to dwell on the fact that only a few people were convicted and there was no compensation. Two million people were killed and 5 million were survivors, Chhang said.

“[The tribunal] allowed us to take note of the evidence that clarified the crimes,” he said, adding that many people had been allowed to testify at the hearings.

One of the four cases reached completion, one was dismissed, and the other two are at various stages in the court.