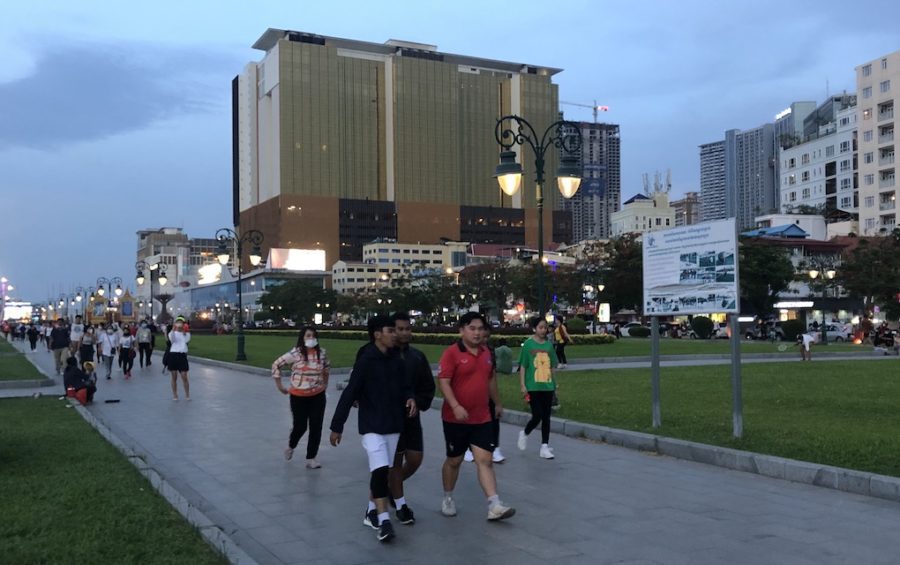 People walking in a plaza in central Phnom Penh on April 26, 2020 (Matt Surrusco/VOD)

Health authorities and experts on Monday warned citizens to remain vigilant and keep up precautions against Covid-19, despite no new cases being reported in the country for 15 consecutive days and only three patients remaining in quarantine.

During a press conference, World Health Organization (WHO) country representative Li Ailan praised government efforts to contain the virus’s spread, but warned that Cambodia’s coronavirus risks were “not low.” The nation needed to remain on high alert for imported cases and prepare for new infections, according to Li.

“I don’t think the Cambodian population is immune to Covid-19, so we need to be vigilant,” she said.

“The loss of carefulness in practicing self-protection from Covid-19 infection is the greatest risk to opening a path for the pandemic,” Bunheng said.

The global infection rate has surpassed 2.8 million people, with nearly 200,000 deaths, according to the WHO. Cambodia has confirmed 122 infections and no deaths.

Ministry spokesman Ly Sovann said more than 1,500 individuals were tested among the 1,784 Covid-19 samples taken in the past week. Before April 20, slightly less than 6,000 individuals had been tested in Cambodia.

According to a Health Ministry report released on Saturday, at least 200 samples were tested for Covid-19 per day on Thursday and Friday last week, and more than 300 on Wednesday, up from an average of 150 tests per day in the previous week. The national testing capacity is 600 per day.

The increased testing coincided with a week of health checkups for more than 5,000 workers of an estimated 30,000 who missed work over the Khmer New Year holiday this month, and were presumed to have traveled to the provinces despite travel restrictions being in place.

Workers who didn’t show up to work in mid-April were ordered to stay at home for two weeks of self-isolation.

On Friday, the Labor Ministry said 125 workers who participated in health screenings last week were tested for Covid-19, and all tests came back negative.

Sovann, of the Health Ministry, said officials had traced more than 3,000 people who had direct or indirect contact with Cambodia’s 122 confirmed Covid-19 patients. He said all people who were known to have had contact with two people suspected to have contracted the virus locally in Phnom Penh’s Boeng Keng Kang I and Koh Pich neighborhoods had been identified and tested.

Youk Sambath, a secretary of state at the Health Ministry, said that of the more than 87,000 migrant workers who had returned to Cambodia in recent months as international borders closed, some 2,200 had been placed in quarantine. More than 1,700 of the quarantined workers had been allowed to return to their homes after displaying no symptoms of the respiratory disease, she said. Sambath did not say how many returned workers had been tested for Covid-19.

After urging Cambodian officials to conduct more tests last week, Li from WHO piled praise on government efforts, saying on Monday that the country currently had solid testing capacity. She also said the government had improved its ability to search for contacts of confirmed coronavirus patients, though she had noted last week that the Health Ministry could perform “a little bit more aggressive contact tracing and testing more.”

“We have had no new cases, and this is good news, but we have to be ready for a long-term battle because the virus will not go away quickly,” she told reporters. “There should be no surprise to have new cases in Cambodia, even knowing that there are no new cases right now.”

Li said the WHO advocates a “phased, step-by-step approach” to easing restrictions as the number of cases decreases. To do so, she said the government would need to ensure it is prepared for potential future outbreaks, workplaces and schools would need to have preventative plans in place, and citizens would need to continue practicing hygienic habits and social distancing.

“Covid prevention requires a new way of working,” she said. “It’s time to change behavior to be more civilized. It’s good not only for Covid but for other diseases as well.”

When asked when schools would reopen, Bunheng, the minister, said the government was reviewing the possibility but did not comment further.

Laurence Baril, director of Pasteur Institute, said its laboratory had a few thousand tests available, which she said was sufficient for the country in the coming weeks.

The WHO was working with the Health Ministry to procure more tests in order to prepare for future outbreaks, Baril said, although she did not answer a reporter’s question about whether the current testing capacity would suffice in a sudden, severe outbreak.

The director said Cambodia had avoided “a dangerous slope” by exercising precautions before a rash of infections broke, but she warned that people should not let down their guard, given the risk of new outbreaks.

“It’s very important to understand that there will be no back to normal, even if we have zero cases,” she said.

“[If we] forget ourselves, fail to follow [guidelines] and think that Cambodia has no more Covid-19, it is a mistake,” she said. “We can forget Covid-19, but Covid-19 has never forgotten us. Whenever there is opportunity and space, this virus Covid-19 will attack us.”