Opinion: How Some Cambodian Women Contribute to the Patriarchy 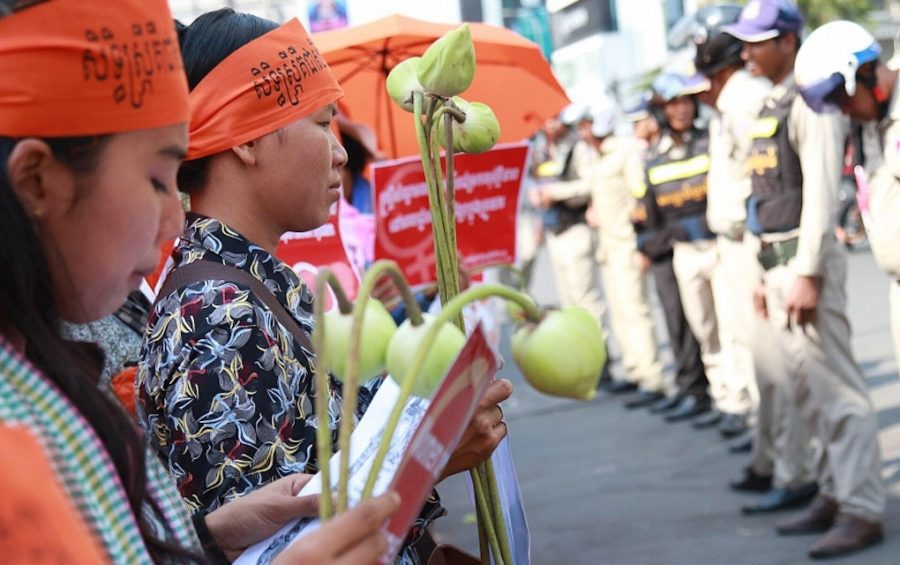 During a meeting of the National Council for Women last month, Prime Minister Hun Sen ordered authorities to take action against Cambodian women who wear “sexy” clothing in online videos while selling products.

The sales tactic, according to the premier and others, is an affront to traditional Cambodian values and degrades women.

“You sell products, not your breasts,” Hun Sen said, adding that authorities should “educate” the online vendors and tell them to change their clothes.

Ven Rachna, who sells clothing and lingerie via her Facebook page under the name Thai Srey Neang, was the first victim of the government’s new crackdown on what women wear. Rachna, 39, was initially called in for “education” and later charged for pornography and indecent exposure.

If convicted of producing pornography, she could face a maximum punishment of a year in prison and a fine of 2 million riel ($500).

While gender equality advocates called out the government’s recent moves as a restriction on women’s rights, some Cambodian women have voiced support for the measures, and simultaneously reinforced the patriarchy.

One manager of a Phnom Penh clothing store told VOD the day before Rachna was arrested and charged: “I think it’s a good thing because I see on Facebook women wear only their bras and it’s not a good look for our country.”

Following some public criticism of Hun Sen’s views on online saleswomen’s attire, Chou Bun Eng, vice-chair of the National Committee for Anti-Human Trafficking, told the Khmer Times last week that the prime minister had made the right move.

She said women who display photos of themselves in skimpy dress tempt men to cheat on their wives and invite sexual harassment, the Times reported.

“We support the government’s action to promote the value of women and national identity,” Bun Eng added.

This isn’t the first time a woman’s “sexy” style has made headlines in Cambodia.

In 2017, for instance, Cambodian actress Denny Kwan was banned from making films because she refused to curb her “provocative” style of dress. She was also summoned for “education” by the Culture Ministry.

In Kwan’s case as well, women were among her critics.

Responding to a Facebook Live session hosted by Kwan on her profile, comments from women streamed in. One wrote: “If she is a real Khmer woman, she will not behave in this cheap way.” Another woman chimed in: “You are pretty, yet making yourself cheap. Why wear clothes if you already reveal everything?” Another wrote, “you are pretty but your attitude is not representing Khmer women and very bad.”

Speaking about Kwan, in a different light, to the Phnom Penh Post in 2017, gender studies researcher Theresa de Langis said that in Cambodia, as in other countries, targeted women and others may be constrained by traditional norms.

“Something like this has a chilling effect, not only on her, but on women in general who are hoping to express themselves,” de Langis said.

When talking about patriarchal systems, typically, we portray men as the only actors. But situations like these show that in order for these unequal systems to thrive, the play needs a supporting role — one played by women.

Attitudes about the values and morals of Cambodian women, which are exposed by the legal and social prosecutions of women like Rachna and Kwan, have their roots in traditional Cambodian cultural practices.

Chbab Srey — a code of conduct for women that was introduced in the mid-19th century — illustrates these values. The text teaches how to be the ideal Khmer woman: virtuous and gentle, loyal to her husband and well-dressed.

Although it has not been officially taught in schools since 2007, parts of Chbab Srey seem to remain entrenched unconsciously in Cambodian society’s efforts to control women’s desires.

Traditionally, beliefs that originate from Chbab Srey would have been introduced by parents — most often mothers — from before their daughters could walk.

One lesson relates to the time when a mother might breastfeed her baby. According to traditional Cambodian belief, if baby girls are breastfed for too long, it could make them too passionate and unable to control their desires and emotions. Tradition dictates that boys, on the other hand, need to be breastfed longer so that they are strong, since in the future they will have to work to support their families. Through this tradition, the mother becomes the guardian to protect her daughter against herself and her own desires.

“Chol mlob,” a phrase that means “going into the shade,” is a practice that has gone out of fashion, but nonetheless demonstrates women’s traditional involvement in sustaining patriarchal beliefs.

The Chol Mlob ceremony marks the time when a girl experiences her first menstruation, with mothers often monitoring daughters’ behavior and teaching them about the proper clothes to wear during their period. In extreme cases, girls are not allowed to leave the house nor communicate with men. During this time, girls are also required to study Chbab Srey.

Women policing the morality of other women has an impact beyond Facebook’s marketplaces and the entertainment industry, including curtailing Cambodian women’s role in politics.

While women make up more than half of the nation’s approximately 16 million people, only 20 percent of National Assembly members, nearly 14 percent of senators and about 20 percent of commune officials nationwide are women.

In fact, Cambodian women are more likely than men to think that men are better suited to being political leaders than women, according to a 2019 study from the Cambodia Development Resource Institute. The survey also found that women were more likely to admit to feeling afraid to discuss political views offline.

The study’s authors conclude that beyond “inviting men to change,” promoting women’s empowerment and gender equality also means altering women’s self-perceptions of their social worth and role.

“Women are not only oppressed by men, but also by their internalised oppression as a subordinate group,” they say.

Other research has revealed similar findings. Mona Lilja, author of Power, Resistance and Women Politicians in Cambodia: Discourses of Emancipation, for example, was told during group interviews with Cambodian women that they “feel afraid to speak out and when we speak out we feel afraid that what we say is wrong because women don’t know how to speak.”

But some of us do know how to speak — clearly, directly and without fear. We need to stand hand in hand to encourage other Cambodian women to also make their voices heard.

Only when we are able to challenge and reject patriarchal ideas, including about what women can and should wear, will we be able to realize our own self-entrapment and break away from entrenched roles as supporters of this unequal social system.

Until that day, these patriarchal ideas will continue to hold us all back.