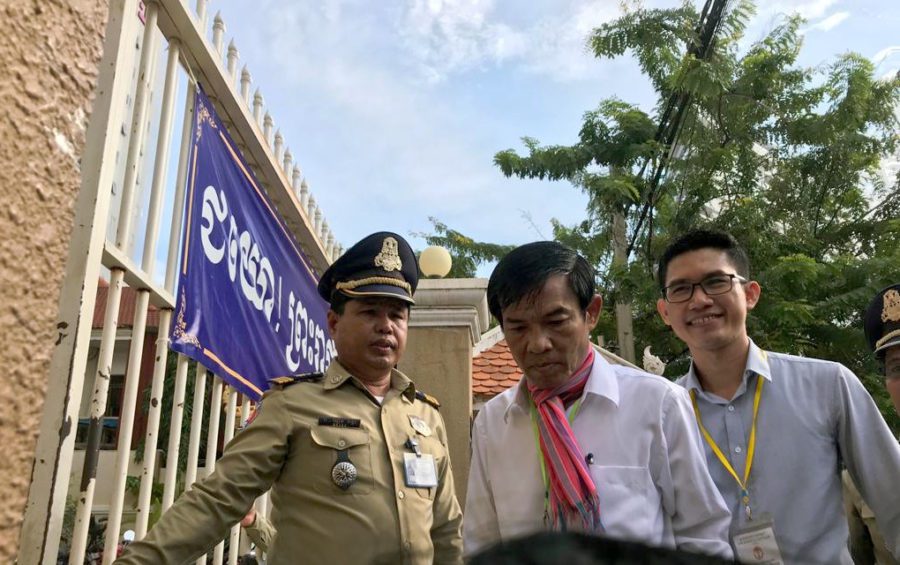 UPDATED 5:55 p.m. — The Phnom Penh Municipal Court on Thursday once again deferred its decision against two former Radio Free Asia journalists accused of espionage, with Judge Im Vannak announcing that the case against them would be reinvestigated.

Reporter Yeang Sothearin and cameraman Uon Chhin, arrested in November 2017 for allegedly conducting espionage while continuing to work for the U.S.-run RFA after it shuttered its Phnom Penh offices, spent nine months in jail before being released on bail last year.

The verdict in their case was originally due on August 30, but delayed because Judge Vannak was busy that day with a seminar at the Justice Ministry.

At the municipal court this morning, Vannak announced no verdict, saying the case would be reinvestigated instead.

The judge said evidence from authorities and statements from the defendants needed to be reviewed and more information collected.

Vannak said while Chhin had maintained that recording equipment found in a rented hotel room was for a karaoke studio business, authorities said it was a “kind of data system that can send information from Cambodia to the world.”

Vannak said the court “needs to investigate and search for other related documents,” and Investigating Judge Pich Vicheathor will again question the defendants and others involved.

The judge added that on September 14, 2017, Chhin sent a message to a U.S. Embassy communications officer and delivered a hard disk to the officer, but the ex-RFA staffer, and the investigation by the court, had not revealed the contents of the disk.

However, an RFA spokesman, Eduardo Jaramillo, told VOD in August that the disk in question contained an archive of 20 years of RFA’s journalism as well as personnel records.

In light of a “climate of intense intimidation” around September 2017, Jaramillo said RFA had wanted its “journalistic archive and basic personnel records to be protected from seizure by Cambodian authorities,” so RFA requested the embassy transport the records out of the country.

At the time, government-aligned Fresh News had published articles accusing RFA and several civil society organizations of being part of a color revolutionary plot to overthrow the government.

In September 2017, opposition CNRP president Kem Sokha was arrested on treason charges and accused of planning to overthrow the government with U.S. support. Two months later the CNRP was dissolved by the Supreme Court.

On Thursday, Vannak said the court was searching for the data and documents on the disk delivered by Chhin, and for the two articles that Sothearin said in court he had reported for RFA after its Phnom Penh office had closed.

His account contradicted RFA statements from November 2017 in which the outlet said Chhin and Sothearin had “no contractual nor any other relationship with RFA to provide news or other services” once it shuttered its local offices two months earlier.

RFA’s Jaramillo told VOD the pair had filed just one story after the newsroom closure, and could not explain the discrepancy with the pair’s court testimony.

Vannak also said the court was seeking the source of recording equipment discovered in the makeshift studio — which the former RFA staffers have said was for a private business — and “whether there was permission to use the equipment as a broadcasting operation.”

“To fulfill the above shortfall, there should be a reinvestigation of the above lacking points so the Phnom Penh Municipal Court decided first to reinvestigate the case,” Vannak said.

Following their initial charge of providing a foreign state with information prejudicial to national defense, Chhin and Sothearin were also charged with producing pornography.

Vannak ordered a reinvestigation of the videos and photos connected to the pornography charges — which were spread online at the time — to find out to whom the explicit content was sent.

Defense attorney Sam Chamroeun told VOD on Thursday that he was disappointed by the court’s decision, as the judge and prosecutor had “enough time” to conduct an investigation and had produced “no evidence” to show his clients were guilty of the accused crimes.

“There’s no reason to do more investigation under the principle of a fair trial,” Chamroeun said. “I think it’s a legal strategy for the trial council to prolong the case.”

He said the Appeal Court in late June had ruled that the pair was no longer under court supervision, but the authorities still held their passports and most of Chhin’s equipment, including a computer, cameras and recording studio gear, which had been confiscated in 2017.

Speaking outside the court on Thursday, Sothearin also expressed his disappointment since he had expected a clear decision after nearly two years of waiting for a verdict.

“I am not scared of the re-investigation because we are good [people],” Sothearin said. “But the problem is that the investigation time is already long and it affects our freedom.”

He said he felt there was an intention to keep him and his former colleague suffering since he still had charges hanging over him and could not perform his job as a journalist.

Chhin said that since he had stopped working for RFA he never considered going back to work for the outlet, but would like to work as a journalist again.

While he had expected a “day with a clear sky” in which his sadness would cease, he said on Thursday that he too was disappointed.

“I think that we are just victims and hostages of the situation,” he said. ”If I was not a former Radio Free Asia staffer, I believe that there would be nothing happening to us.”

The lingering investigation, following nine months in jail, infringed on their rights, as well as freedoms of expression and the press in Cambodia, said Chak Sopheap, executive director of the Cambodian Center for Human Rights.

“I think that so far, if the court cannot find the facts supporting the charge, the court should drop the charges and provide justice for both of them,” said Sopheap, who observed the court proceedings on Thursday.

“When reporters who are just fulfilling their professional duties are faced with legal action, it will threaten freedom of expression and freedom to work in journalism,” she added.

Cambodia was ranked 143rd out of 180 countries in Reporters Without Borders’ 2019 World Press Freedom Index, down one place from 2018.

Local journalists and rights groups have called for the charges against Sothearin and Chhin to be dropped.

Rohit Mahajan, a spokesman for RFA, said in a statement emailed prior to the judge’s announcement that the news outlet hopes “both men are acquitted and that their long, unnecessary persecution comes to an end.”

Phil Robertson, Human Rights Watch’s deputy Asia director, said in a statement that the court’s decision to reinvestigate the case was “ridiculous and punitive,” and a missed opportunity for the country that Phnom Penh-based diplomats and U.N. officials should be vocal about.

“There was never any real evidence these two journalists committed espionage in the first place,” Robertson said.

“This case was politically motivated from day one and the judge’s admission there is no real evidence should have prompted the dismissal of the case, not a re-investigation which will plunge these journalists back into a never-ending nightmare.”

Correction: The article originally stated Yeang Sothearin and Uon Chhin spent a year in jail before being released on bail. They were jailed for nine months.