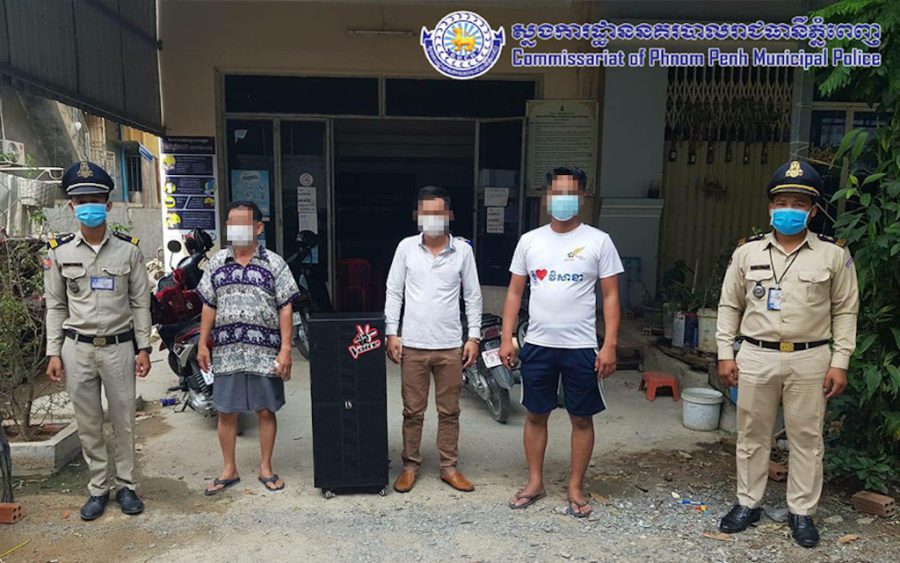 Three men have been released — with possible fines on the way — after their arrest on Sunday for meeting up to drink and sing through loudspeakers despite Phnom Penh’s ban on gatherings amid a Covid-19 outbreak.

However, Phnom Penh Municipal Court spokesperson Kouch Kimlong said on Thursday that they had been released on Wednesday after the court found that fines were more appropriate for the men’s alleged violations rather than jail time.

Kimlong said they had violated Article 3 of the Covid-19 Law — which states the government “may impose necessary health measures” — without specifying the exact violation.

“Deputy Prosecutor Muth Dara decided that the Ministry of Health should have the authority to fine the three of them and to make a contract and educate them to respect all the health rules and allow all three to return [home],” he said.

Kimlong did not say what the fine might be. The Covid-19 Law allows jail sentences of six months to three years for not complying with health measures, while a separate sub-decree specifies fines of up to $250 for individuals violating public health measures.

Kok Khleang commune police chief Duong Vannak said the case was out of his hands and he did not know if the men would be fined. Phnom Penh police chief Sar Thet said any fines would come under the Health Ministry, which has not answered questions about the case.

Cambodia currently has over 1,000 active cases of Covid-19 amid the country’s worst outbreak to date, leading to a nationwide inter-provincial travel ban this week.

Government spokesman Phay Siphan said on Wednesday that the travel ban was necessary to protect the country ahead of the Khmer New Year holiday next week.

Kin Phea of the Royal Academy of Cambodia added that he hoped the travel ban would lead to the end of the current “February 20” cluster in a month or two. However, “unless 70 to 80 percent of the whole population gets vaccines,” the country could continue to see outbreaks, he said.

Labor Ministry spokesman Heng Sour said on Wednesday that vaccinations for garment factory workers could become mandatory as the country aims to vaccinate 10 million people by June next year.

The country has so far given first doses to about 420,000 people in just under two months, or about 4 percent of the goal.