SRE AMBEL DISTRICT, Koh Kong — Hong Sok remembers clearing his own patch of land when he was 16 years old, after his parents passed a piece to him in order to start his own farm. He says he would like to be able to give land to his children too, but his land has been impossible to farm for around five years now.

Sok, 48, who lives and keeps rotational farmland in Chi Khor Krom commune, says he’s been stopped from farming his 10 hectares of land for about four or five years, after the Heng Huy sugar plantation built a pig hut nearby. There’s a guard stationed on the land who allows him to visit but stops him from farming, Sok says.

“We don’t demand money. Just allow me to go to my rice field,” he says. “If I try to go, they say I’ll infect their pigs.”

The land is within the Dang Peng protected area, and he has been prevented from cutting any trees, Sok says. But others have begun to clear tracts of protected land, he says.

Sok takes reporters to a point where rice fields transition into a swampy forest. After 10 minutes of wading through flooded trees, he reaches the edge of the forest line. He says the forest once extended further, but was recently cleared and filled with sand.

“Before, there used to be a lot of fish. Fish used to be around in the forest. Now they’re no more,” he said. “In this wetland, we once had more biodiversity.”

Residents in the area have long dealt with land issues related to infamous sugarcane plantations nearby. Activity on those plantations appears to be waning amid falling prices, but the residents are now bracing for more problems as the province undertakes a massive reclassification of protected areas through an expansive but opaque government land-privatization program.

As part of the government’s campaign, ostensibly to benefit poorer households, Cambodia has cut nearly 127,000 hectares from Koh Kong — more than 11 percent of the province’s total 1.1 million hectares. The Dang Peng multiuse zone, which covers all of Chi Khor Krom commune, will lose 19,651 hectares of protected area in the government’s decisions. 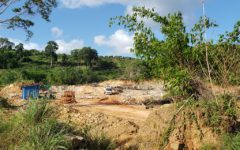 Part I: Koh Kong’s Mass Land Privatization Elicits Doubt, Laughter From Villagers
“I don’t want the government to cut land from the forest, because there will be less for the people. When they cut, powerful people are the only beneficiaries.” In part one of VOD’s reports from the province, Tuol Koki commune residents laugh off the prospects of benefiting from the campaign.

Chi Khor Krom and Sre Ambel communes fully fall within the protected area, while the Dang Peng multiuse zone also includes parts of Botum Sakor district’s Kandorl commune and Sre Ambel district’s Dang Peng, Chroy Svay, Chi Khor Loeu and Boeng Preav communes. If this newly-privatized area were to be distributed to all 9,761 households counted in those communes in the 2019 census, each household would receive about 2 hectares of land.

Another 6,280 hectares were privatized due east of the protected area and the nearly 10,000-hectare Koh Kong Sugar Industry concession, in an area called a borderland to the Cardamom Mountains protected area.

In environmental terms, Dang Peng has been decimated by land clearance in recent years: The 29,110-hectare protected area lost 5,650 hectares of forest cover since 2001, according to Global Forest Watch. The worst year for deforestation was 2012, when the area lost nearly 1,000 hectares of tree cover, but forest cover loss was also prevalent in 2019 and 2020 at 462 and 289 hectares, respectively. Along its eastern side, near Sre Ambel commune and its sugar plantations, satellite imagery shows a tract of Dang Peng that appears to have already been completely cleared.

“That land is residents’ houses, farmland and cultivation land since a long time ago, and I could not remember when it was placed in a protected zone. After that, people could cultivate it, but they could not have full rights on the land.”

Chi Khor Krom commune has two community forests, says Hai, one flooded and one dry, totaling about 1,000 hectares. He admits that some people seem to have been clearing the area, but insists that it has been minimal.

“There has been little clearing, and after we educated them, it seems to be quiet,” he says.

Earlier this month, residents of Botum Sakor’s Kandorl commune, also within the Dang Peng protected area, claimed that people had this year cleared more than 500 hectares of forest, though a commune chief disputed this, saying it was only 2-3 hectares.

The distribution of Koh Kong protected areas is part of a campaign announced by Prime Minister Hun Sen last July to allocate land to poor families across the country, but skepticism persists that the land will end up in the hands of the wealthy.

Nhang Tnhiv, who has traveled to Phnom Penh multiple times as a representative for the families in dispute with sugar concessions, says she fears history is repeating.

As clearings in protected areas increase, Tnhiv says she is concerned that the newly privatized land will not be distributed to residents.

“What we fear is that like in the Heng Huy case, there is less land for us,” she says. “They’re using the banner of development of the commune to take over land. It’s no benefit to the people.”

Much of the area has already been eaten up by sugar concessions: the Heng Huy Agriculture Group holds 2,600 hectares south of National Road 48, while Thai sugar company Khon Kaen Sugar Industry, Taiwanese Ve Wong Corporation and senator Ly Yong Phat were at one point involved in two concessions, Koh Kong Sugar Industry and Koh Kong Plantation, to the northeast. The concessions total almost 20,000 hectares combined. Hundreds of villagers were evicted, at times violently, to make way for the plantations, according to reports at the time.

Tnhiv believes the different plantations are linked after witnessing trucks traveling between them.

However, she says activity on the sugar plantations is slowing down. Sugar prices are crawling back up after falling below $0.1 per pound last April, hitting an all-time low, according to the International Sugar Organization.

Many of the residents who worked at the plantations have lost their jobs harvesting sugarcane, while Tnhiv says she has heard that 10 families have been allowed to farm part of Koh Kong Sugar’s plantation — after promising that they would not try to claim the land later.

Khon Khaen Sugar and the Heng Huy Agriculture Group did not respond to requests for comment.

When asked whether she believes she will receive land from the protected area reclassification sweeping the province, Tnhiv recalls that Heng Huy and officials previously promised Koh Kong residents land in 2019, but the area offered was smaller in size or less fertile than the land they held. She has checked with her networks of Koh Kong residents in land disputes, from nearby disputants with the sugar concessions in Botum Sakor’s Ta Nuon commune all the way up to Chi Pat commune in Areng Valley, and she had not heard that they had accepted any settlements offered.

“I don’t believe that the people who are victims are the ones who will receive it. … Maybe they cut it to give to themselves. It doesn’t reach us.”