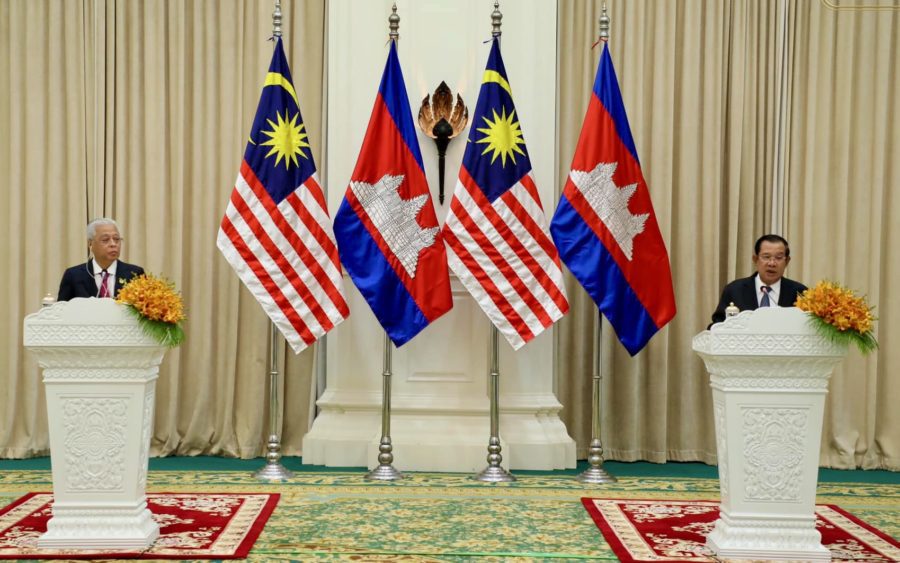 In a diplomatic dodge in a Thursday press conference with the visiting Malaysian premier, Prime Minister Hun Sen quickly shut down a reporter’s questions about previous criticism from the Malaysian foreign minister.

Malaysian Prime Minister Ismail Sabri Yaakob is in Cambodia for his first visit to the kingdom and met with Hun Sen at the Peace Palace, where the two leaders reportedly discussed ways their countries may further cooperate in economic and technological development.

The prime ministers sat for a press conference after their meeting, in which they told reporters they had agreed between themselves that the war sparked by Russia’s invasion of Ukraine should be met with peaceful dialogue and solution-making.

But the press conference ended abruptly when a reporter from Bayon TV asked Yaakob whether he felt regret for earlier comments of his foreign minister, Saifuddin Abdullah, who had in mid-January said Hun Sen should have consulted with other Asean leaders before making a unilateral visit to Myanmar.

That visit, in which Hun Sen met with Myanmar military leader General Min Aung Hlaing to discuss his country’s post-coup conflict, was widely criticized within Asean as running contrary to the bloc’s five-point consensus for dealing with ongoing warfare and unrest in Myanmar.

The Chinese Chamber of Commerce issued an open letter Thursday condemning the ongoing trend of crimes against Chinese citizens in the kingdom related to online scam organizations.

The letter specifically addressed “shooting, kidnapping and extortion” of Chinese nationals and called on authorities from both China and Cambodia to do more to address these crimes and punish their perpetrators.

“The methods of some of its criminals are extremely cruel,” the Chamber letter stated. “The atrocities made one boil with anger and aroused the strong indignation of the Chinese compatriots in Cambodia and the Chinese people at home.”

The Chamber letter attributed all of these cases to online gambling and fraud organizations, which it described as causing “immeasurable damage” to the Cambodian business climate while shaking the confidence of Chinese investors.

The Chamber urged officials in both countries to hasten the investigation of such crimes and to crack down on the groups that commit them.

There has been a dramatic increase in reports about the use of forced labor and physical violence against foreing workers at scam operations run across the country, especially in Sihanoukville. VOD has found that some of these scam operations are linked to influential businesspersons in Cambodia.