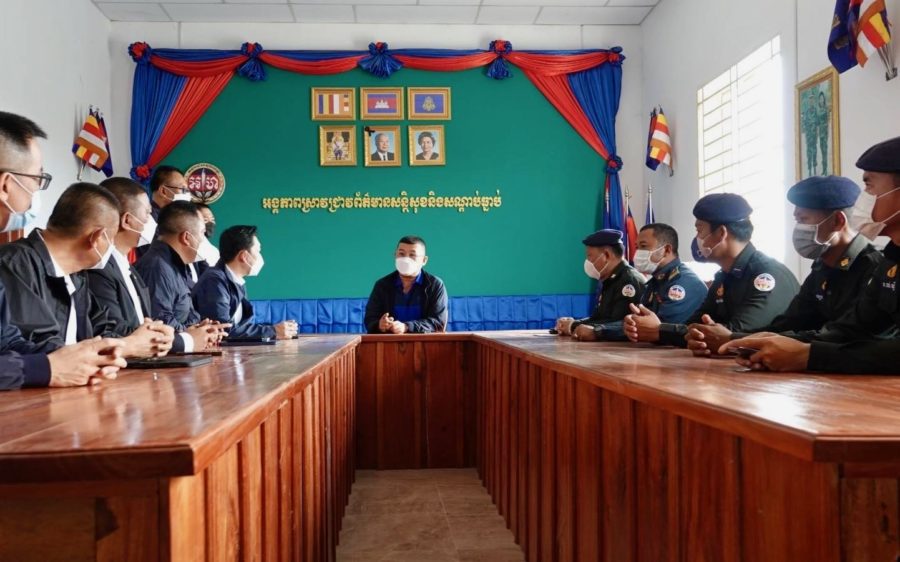 Thai and Cambodian law enforcement officials meet in a photo posted on February 12 to a Line group of Thai police and journalists.

The raids came amid a spate of forced labor, torture and trafficking at Cambodian scam operators that involve thousands of workers in total, according to rescued forced laborers.

Thai police said the latest raids came about after “an official discussion” and passing along 71 specific warrants for Thai individuals to Cambodian authorities.

“Actually, we wanted all of them, with or without a warrant, Chinese nationals and all, but it was [Cambodia’s] condition. We had to accept it,” one Thai official said.

According to a Thai police statement, three raids were conducted last Friday in Phnom Penh and Sihanoukville amid a surge in online and phone fraud activities reported in Thailand. The suspects were arrested on grounds of illegal entry by the Cambodian authorities then handed over to Thai police. They were being charged with fraud and involvement with transnational crime organizations, the statement said.

One raid was at Phnom Penh’s Y.N. Hotel, where suspects allegedly lived and used at least six of its floors as their base for a cryptocurrency investment fraud that caused over 200 million baht of damage, or about $6 million. Only two people were arrested there, the Thai police statement says.

Two other raids were in Sihanoukville. One was at a four-story building standing opposite the Sokha Vegas Casino, where six suspected phone scammers were rounded up for pretending to be police officers to extort money from Thai nationals. The scams at the location have caused damage worth at least 300 million baht, or about $9 million.

The other was at the “Chinatown GM Office” where 13 suspects were accused of claiming to be staff of major mall chain Central Group and state-owned oil company PTTEP in order to trick victims to play and invest in an online game, causing at least 500 million baht of damage, or around $15.5 million.

Thai police said all three groups were allegedly employed by Chinese people. However, there were no reports of Chinese nationals arrested in the raids.

“We were able to have an official discussion with representatives from Cambodian authorities, and we gave them as many as 71 warrants,” said Damrongsak, who is also head of Thai police’s cybercrime task force.

“We have also requested that if they find anyone scamming Thai nationals, even without a warrant, we would like them to be extradited to Thailand for prosecution.”

While saying he was “quite satisfied” with the result of the operation, Samut Prakan immigration chief Parinya Klinkesorn, who was part of the Thai delegation last week, told VOD that Thai authorities were rather kept at arm’s length by the Cambodian officials.

Although the media release from Thai police suggested they were joint raids, Parinya said the Thai side was not allowed to engage in any of the processes, whether the raids or the preliminary interrogations, until the suspects were turned over. He therefore was not sure if there were more people found at those three locations, and he could not say if anyone else besides the 21 were also arrested.

“Everything was managed by the Cambodian side. … We were handed over only those who were named in the warrants we gave them,” he said by phone on Monday. “Actually, we wanted all of them, with or without a warrant, Chinese nationals and all, but it was [Cambodia’s] condition. We had to accept it.”

Kritsana Iamsa-ard, a local police investigator in Sa Kaeo province who is often part of such cross-border operations, said the best Thailand could do for now was to keep investigating from the Thai side, then negotiating and building a stronger relationship with Cambodia.

“Cambodia could arrest them for illegal entry. We don’t have any jurisdiction there,” he told VOD. “What we could do is … try to push for [an extradition] to the border area, and then arrest them with our warrant.”

Last month, Thailand’s Digital Economy and Society Minister Chaiwut Thanakamanusorn said an agreement was reached during a meeting he had with his Cambodian counterpart that the two countries would step up collaboration to clamp down on the transnational fraud operations.

Banteay Meanchey provincial police deputy Eng Lyhour said his officers had handed over only 16 people across the Thai border on Saturday, disputing the Thai police figure.

“We just looked at the documents and handed them over to Thai authorities. … We cooperated because it was cross-provincial,” Lyhour said. “I don’t have information about the additional five. … The number does not match our list.”