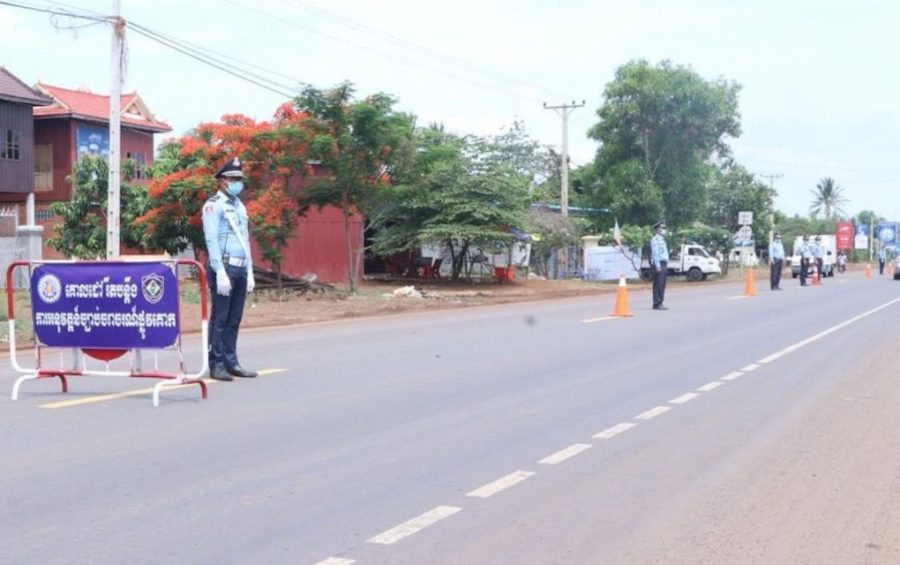 A police officer has been removed from his position as Kampong Thom traffic police chief after allegedly driving drunk and crashing his vehicle earlier this month, but has not been fined for the apparent traffic violation, a police official said on Monday.

Rom Sovichea, the ex-traffic police chief who crashed his personal car into road barricades on May 15, has retained his police rank and has faced no criminal penalties for allegedly driving drunk, said National Police spokesman Chhay Kim Khoeun.

Kim Khoeun told VOD last week that Sovichea appeared to be intoxicated at the time of the accident.

“Because he is a traffic [police] chief and he did something messy, [he was] punished as a warning to let other officials know that [law] enforcement officers will face double punishment,” Kim Khoeun said, claiming that law-breaking officers would be penalized more severely than other people.

Kim Khoeun said Sovichea’s drunk driving “mistake” would normally result in a suspension and warning, but since he was a bureau chief he was punished more severely.

Yet, asked if any legal action would be taken against Sovichea, Kim Khoeun said not unless provincial governor Sok Lou filed a complaint against the ex-chief and demanded compensation for damage of state property and an insult aimed at Lou by Sovichea at the scene of the accident.

In a notice signed by Interior Minister Sar Kheng, Sovichea was relieved of his duties in the Kampong Thom police as of Thursday, but required to be present at the personnel department during work hours until a new decision was made about his case.

Sovichea drove his car into a barricade surrounding a statue on May 15 at about 9 p.m.

Kim Khoeun told VOD last week that Sovichea had insulted Lou at the scene of the crash and complained that poor lighting had contributed to his accident. The police spokesman had added that officers needed to be punished according to the law like anyone else.

“Even though he is [part of] the traffic police or any kind of police officer, whenever someone violates the traffic law, they need to be fined and punished under the law like regular people,” Kim Khoeun said at the time.

Yet, on Friday, when asked what might happen to Sovichea following the announcement of his firing, the spokesman said the investigation into the crash was ongoing and questioned a reporter’s questions about how Sovichea may be punished under the law.

“The important thing is the investigation,” Kim Khoeun said. “Do you want him to be shot or what?”

Lou, the provincial governor, said on Monday that Sovichea had been driving alone and was under the influence of alcohol when he crashed his car.

“He was very drunk. If you heard and listened to his voice, you would know. I don’t know how long he was drunk,” Lou told VOD.

The governor said that he had not filed a complaint against Sovichea over the officer’s insults because the ex-police chief was a long-serving officer and also verbally apologized to Lou.

This year, the provincial administration set up more lighting in the area near the crash site and no accidents had occurred there until Sovichea’s crash, he said.

Lou added that he would respect any decisions made by the National Police and minister Sar Kheng.

Kheng issued a warning letter to Sovichea dated March 26 and seen by VOD in which Kheng notes Sovichea’s “carelessness in implementing duties,” although the letter does not specify his alleged wrongdoing.

Both Kosal and Him Yan, National Police deputy chief and National Road Safety Committee member, could not be reached for comment on Monday.

Under the increased penalty fees, drunk driving fines were raised by five times their previous rate to between 1 million and 4 million riel (about $250 to $1,000), depending on the type of vehicle.

Kong Ratanak, director of the Institute for Road Safety, told VOD that removing Sovichea from his position was a positive step, but the fired police chief should also be penalized according to the law in order to show that authorities apply the law equally, whether civilians or law enforcement officers are the ones accused of wrongdoing.

If Sovichea’s blood alcohol level was checked and found to be over the legal limit, he has to face fines, according to Ratanak.

“For me, I want to see the government take action in relation to the laws that were newly set,” he added. “But if the [government] does not do so, people will probably believe that the government is biased in implementing the law.”

Por Pheak, director general of the Interior Ministry’s general secretariat, declined to comment about Sovichea’s case, but said that in general, the traffic law was applied to everyone in the same way, regardless of whether they were an official or a civilian.

“For law enforcement, in my personal view, it is all the same,” he said.