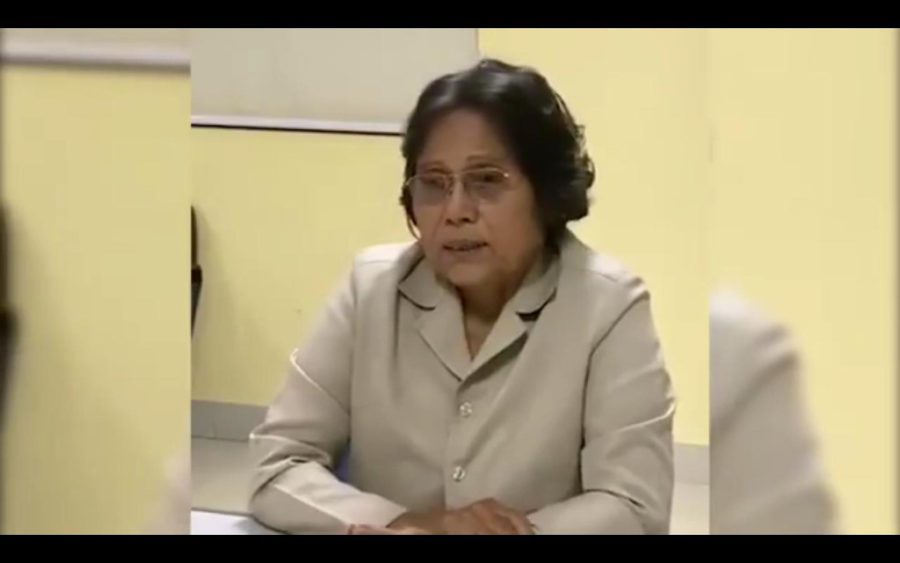 Seng Sokhorn, a former opposition commune chief in Phnom Penh, speaks in a video released by the government’s Press and Quick Reaction Unit on October 10, 2019.

A former commune chief of the outlawed opposition has condemned “treasonous acts” by an exiled CNRP leader in an on-camera “confession” that opposition politicians say was coerced, two days after the ex-chief was charged for plotting against the government.

In the video produced by a government press unit, Seng Sokhorn, the former chief of Phnom Penh’s Phsar Depot II commune, says she had joined the banned opposition CNRP because she saw leader Sam Rainsy’s “good deeds” and policies that would benefit people’s livelihoods.

But later, Sokhorn says she “decided to confess in front of the authorities” because Rainsy’s actions — including “inspiring people to stand up, persuading soldiers to face off with the government and insulting the king” — were “treasonous” and “wrong.”

Sokhorn was charged with “plotting” alongside four others on Monday, two of whom were arrested by police while at home in Phnom Penh, according to the CNRP.

In the four-and-a-half-minute video produced by the government’s Press and Quick Reaction Unit, Sokhorn appeals to those who “have gone astray” like her to turn back to the government and “preserve peace” in the country.

A male narrator at the start of video says Sokhorn made the “confession” at the Phnom Penh Municipal Police Headquarters on Wednesday afternoon and “revealed the treasonous acts of Sam Rainsy, the leader of the outlaw rebel group.”

Sokhorn appears to be the first ex-CNRP official to accept Prime Minister Hun Sen’s offer last week to be spared punishment if they confessed to backing Rainsy’s promised return to Cambodia next month, an endorsement which the government has said is equal to supporting a coup.

In the video, Sokhorn looks to be reading off a script. CNRP leaders, including party co-founder Rainsy, and others, said they believed she was forced to “confess” on camera in an effort to intimidate other CNRP supporters, but the tactic would not succeed.

“No doubt, this ‘confession’ was made under duress,” said Rainsy, who has lived abroad since 2015 to avoid a number of court convictions that he calls politically motivated.

Referring to the video as a “cheap tactic on the part of Hun Sen’s henchmen,” Rainsy said in an email that it was “impossible to intimidate the opposition out of existence.”

The CNRP was dissolved in 2017 by Supreme Court order. The court also banned 118 senior CNRP officials from participating in politics for five years, but a handful have gone through a “rehabilitation” process and been allowed back into the political fold after requesting pardons.

Eight months after the CNRP’s dissolution, Hun Sen’s ruling CPP won all 125 parliamentary seats in a national election that the opposition called a “sham” and some Western nations criticized as neither free nor fair.

Ruling party officials have maintained that the CNRP was engaged in a U.S.-backed plot to overthrow the government. CNRP president Kem Sokha was arrested in September 2017 on treason charges, which he denies, and remains under de facto house arrest.

Since Rainsy announced in August this year that he would return to Cambodia on November 9, at least 20 CNRP supporters have been arrested and jailed on various charges, including “plotting” and “incitement to commit a felony.” They were accused in relation to their support for the planned homecoming of Rainsy and other CNRP leaders.

“It’s terrifying for her but the public won’t be persuaded,” Sochua said in a message. “The proof that it is forced is because luring suspects to confess is in the court orders and public statements of the courts and government.”

In recent weeks, court documents stating charges against CNRP supporters have noted that if those involved confessed in a timely manner, they could be exempt from prosecution under the law.

The country’s Criminal Code states that anyone who has participated in “plotting” an attack is “exempted from penalty” if the person informs authorities before they are prosecuted of the existence of the plot and its participants.

Justice Ministry spokesman Chin Malin said the authorities “encourage and welcome those involved in committing offenses to confess in order to prevent chaos and crimes regardless of whether the confession is made before or after the charge.”

“If they confess before the charge, they will be free from all punishment, but if they confess after, it will be up to the court to decide, up to their cooperation in proceedings,” Malin said.

But Morn Phalla, former chairman of the CNRP’s Phnom Penh executive committee who is living abroad, said Cambodian authorities would still arrest and jail CNRP supporters even if they took no action in relation to the CNRP leadership’s planned return from exile.

Phalla — who is one of the 118 senior CNRP leaders who was banned from politics, and who was named by Sokhorn in her supposed confession — said the video was made to intimidate CNRP activists, but neither he nor they would be deterred.

“I will still participate in the upcoming return of the leaders,” Phalla told VOD.

The confession video “won’t influence other CNRP activists who love democracy and fighting in the democratic way and peacefully demanding change,” he added.

In a statement on Thursday, the CNRP reiterated earlier remarks that the return of party leaders and Cambodians living abroad was “not a coup but a non-violent and peaceful solution for Cambodia to return to a democratic path.”

“No one should be prosecuted for welcoming or joining our return,” it added.

The CNRP said “Cambodia’s partners should convince the regime that the Return is an opportunity to reset the current deadlock.”

Rainsy’s “latest conditional proposals” to reconsider his return if Sokha was released and genuine dialogue between the CNRP and CPP was started should be “seriously considered,” the statement said.

Previously, Rainsy said the party was raising funds to offer to defecting soldiers, expected millions of Cambodian migrant workers to join their return, and aimed to force Hun Sen’s resignation via a people-powered movement. But the mobilization to gather supporters in the run-up to November 9 was not a coup attempt, he said.

Officials, however, continue to describe the opposition’s actions as part of a plot to overthrow the government.

In the confession video, Sokhorn says she received a “plan from Morn Phalla asking us to motivate people to welcome Mr. Sam Rainsy when he returns to Cambodia.”

According to Phil Robertson, Human Rights Watch’s deputy Asia director, the government’s aim in publicly showing a CNRP supporter confessing was to “sow doubts in the rank-and-file members of the CNRP who may wonder whether the friend working with them now might betray them later.”

The government was “obviously trying to dishearten CNRP activists facing increasingly intrusive surveillance and harassment,” Robertson said in an email.

Sokhorn “must have come under a great deal of pressure to make this confession,” he said.

“For those facing arrest, the idea of such a confession may be dangled by authorities as a way out of a harsh predicament and the likelihood of months and years in prison,” Robertson added.

Government spokesman Phay Siphan said he had not seen the video confession and referred questions to Tit Sothea of the Press and Quick Reaction Unit. Sothea could not be reached Thursday evening.

Katrin Travouillon, a researcher of Cambodian politics and lecturer at Australian National University’s Coral Bell School of Asia Pacific Affairs, said that while she was unaware of the context of the video’s production, the “mere fact that something like this is being broadcasted speaks to the theatrics of contemporary Cambodian politics.”

“It is not even clear in whose interest this video is: Those supporting the government will cite it as proof for a Sam Rainsy led coup in the making, while those opposed to the government will likely decry the fact that the government resorts to such strategies to intimidate the Cambodian people,” Travouillon told VOD.

“Overall, this whole performance of an impending showdown between Sen and Rainsy just distracts from the real challenges the country (and its government) face.”