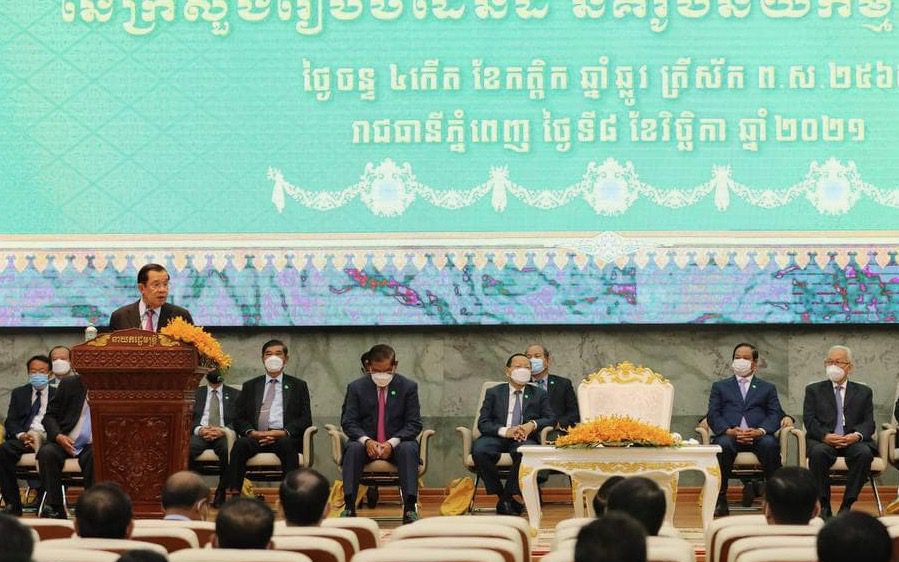 Hun Sen struck a fiery tone at the inauguration of the Land Management Ministry on November 8, 2021. (Hun Sen’s Facebook page)

Prime Minister Hun Sen took serious umbrage to criticism his government has faced for filling lakes throughout the country and justified the moving around of ministries, even as recent sub-decrees show the government privatizing a large swath of Koh Kong’s forests and two pieces of Boeng Tamok lake.

Speaking at the inauguration of the new Land Management Ministry building in Sen Sok district, which was delayed due to Covid-19, Hun Sen said Cambodia’s ministries had been moving locations since the government began rebuilding the bureaucracy after the Khmer Rouge era, so he felt it was time to build up the government buildings.

“We used to see bumpy [roads], pools, ponds, rice fields and [people] picking up the herbs for eating and now all the buildings are skyrocketing,” he said. “Let me do it now since it is my term.”

Monday’s ceremonials marked the second of three ministerial inaugurations planned for this year, he noted. The premier commended Land Minister Chea Sophara, saying the ministry reduced the budget for the building’s construction by $5 million to a total $28 million in order to save money during the pandemic-triggered economic downturn.

Hun Sen also took time to explain some of the land swaps that were occurring among the ministries: the Transport Ministry, already inaugurated this year, was moved close to the Land Ministry, opening up a new space for the Mines and Energy Ministry. The site of the former Energy Ministry in Daun Penh district will now be used for the National Disaster Management Center.

He continued that “lucrative” land can also be vacated by existing ministries for sale, citing the Industry Ministry, which is close to Central Market in Daun Penh district.

The $60-million construction of the new Interior Ministry, which is set to hold a groundbreaking ceremony on Thursday, also follows this same model. The premier signed a letter in August allowing the Interior Ministry to sell the land it was granted on Boeng Tamok lake that month so the ministry can afford to reconstruct the office on land they currently occupy.

“There is already a budget to build this new building … because it is time for us to have an appropriate place for working,” he said of the Interior Ministry plans.

He made no mention of what investors would buy the Boeng Tamok territory or former Industry Ministry land in order to generate construction funds.

Instead, the premier launched into a rebuke of those who criticize him and the government for filling lakes throughout the country, particularly in Phnom Penh.

“What I hate the most is every time there is a flood, they curse and curse that we wipe away the lake,” he said. “Do you understand the word flood!”

Hun Sen then asked Water Resources Minister Lim Keang Hor to define a flood, before continuing on to say that floods were caused by changes in the Mekong river, not just issues with the Prek Tnaut dam, which left residents in southwest Phnom Penh paddling to their homes and feeling abandoned during floods late last month. He also lambasted government officials who warned that flooding is connected to landfilling developments — which the Water Resource Minister Kean Hor did in a letter last year.

Though climate change and hydropower dams on the Mekong River system have been connected to unpredictable flooding in Phnom Penh, an extensive survey conducted by Paris city planning officials shows Phnom Penh’s wetlands are critical to the natural stormwater drainage of the area, thus filling lakes and wetlands can lead to worse flooding.

The premier said other countries like France and Italy experience floods too. He further criticized those who feared issues with the Kob Srov dam, which is located at the base of Boeng Tamok lake.

Hun Sen asked Land Minister Sophara how much land was filled by workers before building the new ministry. Sophara, who was in attendance, replied 4 meters deep.

The premier then referenced a conflict at the adjacent Grand Phnom Penh borey, a Chip Mong Group luxury property where residents earlier this year protested the developer’s decision to fill a lake until armed guards responded. He complained that the lake in the luxury complex was smelly when he played golf there: “If I was the owner of the construction site, I would have filled up [the lake] a long time ago.”

“[In Phnom Penh today], we have such developments, [and] it is better,” he said. “Normally when it comes down with 100 or 200 milimeters, how can the ground handle it! … How foolish! This is so foolish of a person [to criticize]. Now do not worry about anything and just do it,” he said, referring to developments as he scowled to the crowd.

Hun Sen then responded to another common criticism regarding deforestation, saying he was cursed by everyone for allowing people to cut down trees from dense forests.

“They said [we] cut all the trees, … so now in order to collect the trees back, let’s demolish all houses that were built after 1979 … because the trees are [used] in the houses now,” he said.

Environment Ministry officials have also attributed the country’s deforestation to smallholder farmers and those cutting trees for their homes, though satellite imagery, forest defenders’ reports and journalists’ coverage have all demonstrated industrial-scale logging and extensive forest clearance amid rising land prices.

The government granted 8,631 hectares in Koh Kong province’s Ta Noun commune to Royal Group on September 15, in order for the company to develop a special economic zone. Royal Group has floated plans for a 100 square kilometer SEZ near its planned 700 MW coal-fired power plant in the forest-covered Botum Sakor district since 2019, and this latest sub-decree comes at the approval of the Environment Ministry, according to the document.

The government also granted its agencies 150 hectares of Boeng Tamok lake — with 100 hectares given to the Health Ministry and 50 for Phnom Penh’s city administration — on September 27, without revealing what the land would be used for.

In a final land-related sub-decree from September 8, the Land Ministry revoked a 11.6 hectares land grant in Preah Sihanouk province’s Bit Traing commune that was given to a person named Seng Kieng.