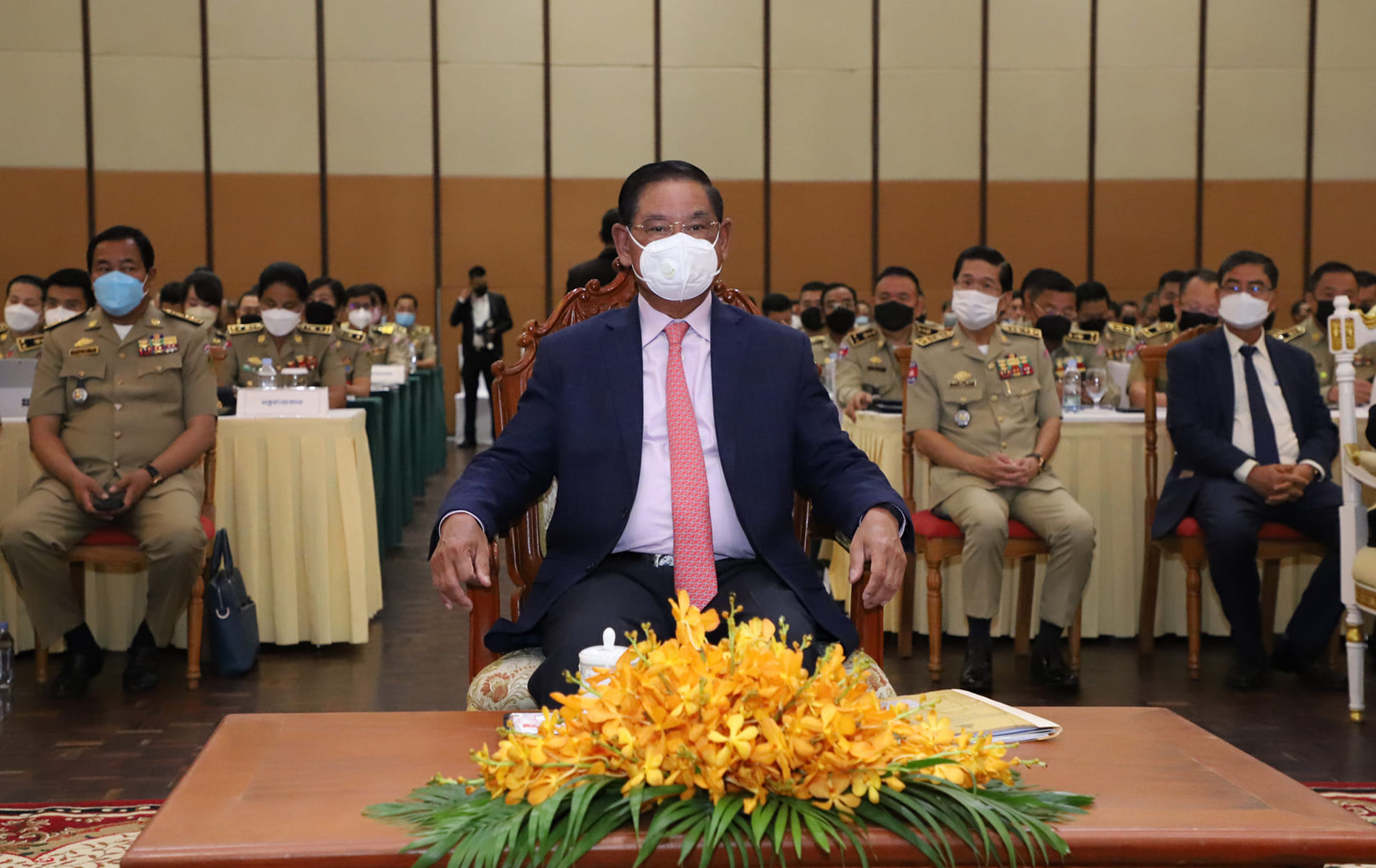 Interior Minister Sar Kheng at a conference with the Immigration Department of his ministry. The conference was held at the Sofitel Hotel in Phnom Penh on Thursday, April 7, 2022. (Sar Kheng’s Facebook page)

Speaking at a meeting with immigration officials on Wednesday, Kheng referred to a Chinese man who was hospitalized in Phnom Penh and claimed in February to have been trafficked into the country and had his blood harvested after refusing to work in online scam operations. Doctors and medical documents told of the man having a severe blood deficiency.

Thousands of foreign nationals are said to be working in such scam operations in Cambodia, with many rescued victims telling of forced labor, detention and torture. Civil society groups have called on the government to “abolish slave compounds.”

Kheng, however, said the man had simply had his blood drawn at a hospital for testing and made up the story. The man, alongside a rescuer of human trafficking victims, his assistant and a doctor, have been jailed over the saga.

“We investigated thoroughly,” Kheng said. “And even though it is fabricated, in China they disseminated it across China and there were dozens of millions of commenters. … When I saw this I asked the National Police to clarify again, because he had reported to me once already … but it was the same.”

He then needed to make efforts to stop the damage to “the honor and image of our Cambodia,” he explained.

“I had to write a letter to His Excellency Zhao Kezhi, minister of public security, and write a letter to the Chinese ambassador in Cambodia to shut down these rumors and ask them to support us and resolve the public opinion in China,” Kheng said.

The Chinese Embassy, after initially issuing a statement echoing the alleged blood slave’s account, later released a statement reflecting the police’s view that it was a fabrication.

As of Wednesday morning, Cambodia had signed an agreement with Zhao to cooperate on security, Kheng added.

“We’ve solved it and now it has completely vanished,” Kheng said of the blood slave story, as well as a second case that surfaced in Thailand. “In our country no one has published it because we have disseminated as such.”

Kheng added that crime in Sihanoukville had also disappeared in the past two weeks, despite a spate of earlier reports about violent and serious crime in the coastal city. Sihanoukville is said to be the site of many of the alleged slave compounds.

“Now it has become better, and I’ve asked [provincial police chief] Chuon Narin, is it better? He said now it is better,” Kheng said. “I have not seen reports. Have you hidden information? … I doubt the provincial police and provincial governor would lie to me, and not report to me. When there are no cases, it is a good thing. … For these two weeks, there have been none.”